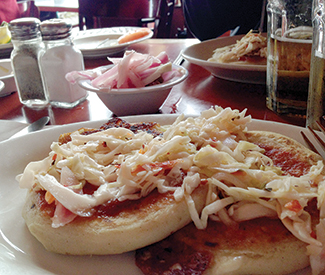 THE WEEKNIGHTER How is it already eight years ago that Nick and I were eating pupusas at Balompie Café (3349 18th Mission, SF. 415-648-9199)? It was the beginning of the World Cup in 2006. At least I think it was. It’s hard to remember this far out, but there was soccer on and excitement was in the air about a sport that, most of the time, Americans don’t give a shit about.

Nick gave a shit though. He cared about all sports, really. In high school he was one of those super jocks who was varsity on like 10 different teams, yet still hung out with stoners like me. We’d grown up together, and that week he was crashing on my couch while we did whatever it was that 25-year-olds do during San Francisco summers. We drank a lot of booze and floated through Mission District dive bars and house parties, overdosing on that elusive thing people call youth.

I know this column is called the Weeknighter, but this particular installment should be the Weekdayer since we’d crawled out of my place with what we thought at the time were hangovers and weaved our way down to Balompie. I say “thought at the time” because at 25, a hangover is something that can be cured with pupusas. At 33, a hangover is something that lays you up in bed for a day while you one-eye a Law and Order marathon.

But pupusas were what we were after and sitting down at one of those long tables populated with Salvadorian families, we ordered plenty of them. As always with Balompie, all the screens in the joint were showing soccer. And while I focused on keeping down the remnants of the previous evening’s Beauty Bar festivities, Nick got into a conversation, in Spanish, with some of the folks around us. They gabbed on about soccer and who was gonna win what, while I stared vacantly at the TV. This was in 2006, so all you really did with your cell phone back then was talk on it. I didn’t have the option of losing myself in a Facebook feed, and though my Spanish is pretty good, it all gets tossed in the trash when I’m hungover.

The pupusas arrived, and up until that moment I hadn’t quite known what the meaning of salvation was. Here it was, in a pile, on a plate, with a side of cabbage slaw and a bowl of hot sauce. So this is what it meant to “see the light” I thought to myself. Everything I needed in the world at that moment was hot, delicious, and in front of me ready to be eaten. Everything in the world was OK.

We ate our fill, chased the pupusas with some beers, and hung out for a bit talking. I pretended I knew things about soccer.

Nick is a dermatologist now and married and living in Los Angeles. I still usually end up sleeping on his couch when I’m down there. We don’t get nearly as trashed as we used to because it just hurts too much the next day. Sometimes we do hang out, though, and tell stories about the days when the Mission was weird and dingy and drinks were $4. We also reminisce about when a pupusa was all we needed to cure a hangover. At this point, all that just sounds like fairy tales.