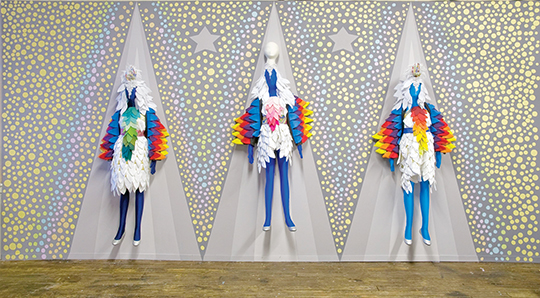 THEATER Out at the Headlands Center for the Arts in Marin, just after sunset, the darkness and the silence are real presences in themselves, not just a context for something else. They’re right now pressing their respective noses against the windowpanes of the large, beautifully-worn army barrack–turned–artist studio in which Saya Woolfalk is pouring some dark red concoction from a squat glass jug.

She begs her guests not to try to translate the hokey Portuguese label on the bottle, brought back from Brazil by her husband, an anthropologist, as she hands each of us a crimson thimbleful in a plastic dentist cup. Looking like NyQuil but tasting more like some berry-based moonshine, it gives me an almost instantaneous headache but is otherwise kind of nice. Anyway, it does the trick. We’re now prepped to enter the mandala.

Standing there with me are Marc Mayer and Annie Tsang, both of the Asian Art Museum, as well as Brian Karl, the Headlands’ program director. The mandala corresponds, for now, to a tape mockup on the floor next to us. It’s a circular shape about four feet in diameter, with concentric and crisscrossing lines. At four equidistant corners outside the circle are small freestanding pieces of heavy paper representing alcoves, on the outside of which a slide projector illuminates a colorful figure in exotic garb. Behind each alcove, Woolfalk explains, a dancer will be tucked away.

Also standing around are two department store mannequins, each draped in a careful clash of fabrics and traditions: a skirt of pink-and-gold-striped glitter cloth from the Mission, a tourist version of a Chinese vest from Grant Street, a batik shoulder wrap brought back from Africa.

Woolfalk’s dance-performance installation — the scale model of which was still being toyed with and adjusted when I visited her temporary studio — has been developed during a residency at Headlands under a commission from the Asian Art Museum, where it will run Thu/4 in the AAM’s capacious upper chamber in conjunction with the exhibition Enter the Mandala: Cosmic Centers and Mental Maps of Himalayan Buddhism (ongoing through Oct. 26). The piece, called ChimaTEK: Hybridity Visualization Mandala, culminates a seven-year project by Woolfalk that has received exhibitions and rapt attention around the country.

It began in No Place, which Woolfalk describes as “a utopian paradise in which hybrid identities flourish in tolerant communities with elaborate cultural rituals.” Its alternative narratives and reconfigured systems of representation took multiple forms across an integrated set of media, an environment unto itself, including a six-chapter ethnographic film documenting No Place made in collaboration with anthropologist Rachel Lears.

In the second iteration of the project, the narrative of No Place advances in time. Now its inhabitants have evolved into beings called the Empathics, who have developed a way of sharing their hybrid consciousness with others, while conducting research through their own nonprofit, the Institute of Empathy.

In this third and final stage, the Empathics have redirected their technology into a for-profit model, namely a corporation called ChimaTEK, a virtual world enterprise in which customers buy access to different Chimeric identities and consciousness through their own personalized virtual avatars. The chimera (which here refers simultaneously to the mythological she-monster made up of different body parts and to an organism with two or more genetically distinct tissues) ends up the repository and agent of corrupted utopian impulses.

As a tool for spiritual guidance, the mandala represents the universe, while helping to train the mind on essential insights and untapped potentialities. Made in collaboration with four local dancer-choreographers working in disparate ethnic traditions — with essential input from DJ Dr. Sleep (Melissa Maristuen) and a “virtual” DJ (none other than Paul D. Miller, or DJ Spooky that Subliminal Kid, who composed the original score) — ChimaTEK will be a kind of contemporary mandala, manifesting a chimeric state of being in which participants remix identities through virtual avatars in a virtual space. Fact and fiction blend so freely here that the distinctions between them might be called into question. So might the degree to which this virtual space is coextensive with the universe itself, or at least our tangled and conflicted corner of it. *