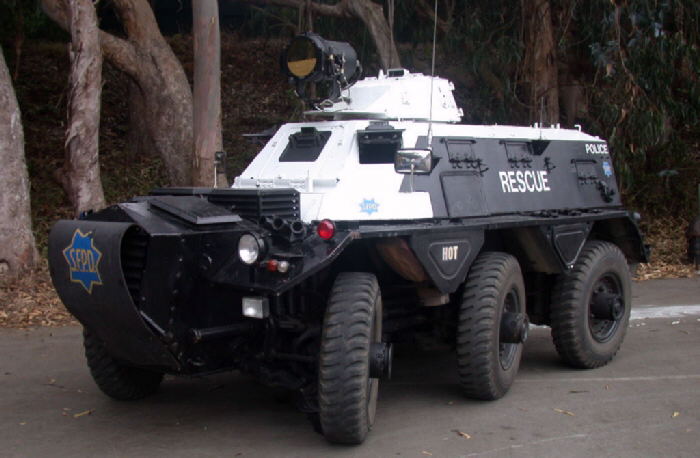 Our news feature story this week covered the militarization of police departments across the country, including the SFPD, and how the easy accessibility of “cool toys” like grenade launchers and armored vehicles encourages violence.

But one conclusion we were left with as we worked on the story was this: the SFPD ain’t all bad. During the last Police Commission meeting, Chief Greg Suhr mentioned he was almost hesitant to order four forklifts from the Department of Defense due to scrutiny from the news media.

All photos courtesy of the SFPD, via Police Car Website.net.

Sure, one of these isn’t intimidating, but have you seen them in action? They climb stairs like it’s nobody’s business, and often can be seen buzzing around the homeless of Golden Gate Park. Imagine a team of four motorbikes racing towards you, and that’s reason enough to shake in your boots. Toss the weed, it’s the cops!

This might be the biggest police vehicle you’ve ever seen, and I’d be just as happy to never actually lay eyes on it in real life.

It comes as no surprise that the SWAT unit uses this bad boy, which looks like it could withstand anything…except maybe the police department’s own grenade launchers and helicopter armament subsystems, that is.

Although it’s a “rescue vehicle,” this behemoth looks like it can do, well, a whole lot more than rescuing. Let’s just say it gives the Batmobile a run for its money.

Okay, this one doesn’t look too scary. But for anyone who has been slapped with a parking ticket that costs somewhere in the triple digits, this vehicle probably evokes painful memories best kept in the past. Ironically, the SFPD car we should all fear the most is the one that looks the least harmful.

This bus looks old enough to be out of commission, but if the SFPD were to put it into active duty you can be sure someone’s grandmother would get on, asking how far it is to the zoo. Beep beep!

The SFPD uses this vehicle to conduct business away from the office, but it also brings to mind a certain Breaking Bad RV. (Okay, that’s kind of a stretch.) But the way things have been going lately, from the crooked drug lab to federal indictments of SFPD cops, would you be surprised if the Police Department had a big-time meth operation going on in its “command centers?” (We’re kidding, of course.)

Sometimes walking around is just too much effort. If you’re a cop and you ride this, you may as well swap your gun belt for a fanny pack.

We’re not sure if the SFPD has any lawns to mow given California’s crippling drought, but this little machine could be used to get rid of the type of weed that doesn’t grow in everyone’s garden. (Yes, that one.) Commence operation weed-killer!

The meter maid’s vehicle of choice is a dual win. Because getting ticketed for parking in the wrong place at the wrong time is a scary thought for anyone, but appearance-wise, this cute little scooter won’t scare a flea.

When it comes to the SFPD’s acquisition of these vehicles and other “toys” like body armor and high-powered weapons, oversight is generally nowhere to be found. Though not every SFPD vehicle looks worthy of oversight, it’s clear that federal funding finances some of the Police Department’s high-scale purchases, including the BearCat and Mobile Command Center.

But our story this week found that the Police Commission often holds hearings for the appropriation of funds for military weapons after the equipment has already been ordered, like in March 2010 when a commission agenda had a request to “retroactively accept and expend a grant in the amount of $1,000,000.00 from the U.S. Department of Justice.” More oversight on these matters could go a long way toward preventing militarization.