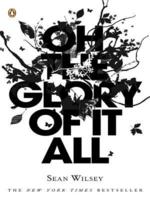 “We used to call this Café High,” author Sean Wilsey says of Café International, our meeting spot, before letting out a hearty chortle. By “we” he means his late-80s classmates at the Urban School, the private prep school 10 blocks or so from the Haight and Fillmore coffee shop. By “high” I assume he’s alluding to marijuana in some form or another, but I’m too intrigued by Wilsey’s instant openness and nostalgia to probe. Despite four other high schools (he never graduated), myriad other cities (he doesn’t come back to San Francisco very often anymore), and 25 or so intervening years (he’s pushing 45), Wilsey still grasps the vibe of his native hood with the exactitude of a lifelong resident.

“A lot of places used to look like this …Café High only stands out now because it’s a relic.” The joint, which plays reggae tunes, has scuffed floors, and whose waiters delivered a gorgeous mango smoothie to Wilsey, is no longer the stereotypical SF hangout spot. Instead, the boutique and artisanal bars and coffee houses of the tech boom are the preferred haunts for most interviews and meetings of the literati. As he discussed his own evolution on gentrification, his wide and incisive eyes, usually full of exuberant twinkle, squinted in judgment. “When it first started happening, I said, ‘Shit, yeah!’” But then it loses its edge of interestingness,” Wilsey says. “The Haight used to feel totally wild and nuts. Now I wouldn’t think twice about bringing my grandmother here at any hour of the day.”

Wilsey’s ability to instantly contextualize San Francisco’s commercial shifts despite his absence is testament to the depth of his analytical mind. The writer has managed to become a magazine mainstay, wildly successful memoirist, and, most recently, author of the McSweeney’s essay collection More Curious, because of this uncanny observational ability. He’s had a prolific and varied career and is only picking up steam. Yet, like the stories of many artists, Wilsey’s journey is one built more on compulsion than pure bliss, calling than serendipity.

Given his background as the son of San Francisco socialites Al Wilsey and Pat Montandan, Wilsey is astonishingly self-made. “I have endured a certain amount of ridiculous preconception, especially in this town, out of the fact that I have a family that casts a shadow here,” he explains. “But I don’t feel like I have anything to do with it.” Despite his feelings of distance from his family’s legacy, Wilsey appears anything but bitter — he talks of his parents with a smile. Instead, he simply seems to have fought to find his own road.

After his tumultuous and often delinquent high school journey, he began honing his writing and eventually moved to New York City with the express desire to get a job at the New Yorker. “I said, ‘I’m not leaving until it happens.’ There was a lot of determination,” he says. Wilsey sent his portfolio to the New School, got in, and happened to find a professor who worked at the New Yorker. Wilsey had been at Newsweek organizing responses to letters, but eventually, after a year of calling the head of the messenger room, finagled a job as an in-house deliveryman at his dream publication.

“It had to be one of the favorite jobs that I ever had, because they would literally be like, ‘run this down to Norman Mailer’.” Despite the high-profile deliveries, Wilsey’s life was scrappily exhilarating as opposed to glamorous. He lived on a ferryboat that had docked at Pier 25, did restoration work in exchange for habitation, and got by on the $18,000 messenger salary.

I couldn’t help but think that the author’s early years in the industry were ripe for some sort of further artistic exploration, so it wasn’t surprising when Wilsey revealed that he is working on a new memoir that will incorporate his New York years. Our conversation began to transition from the biographical to the philosophical as we discussed his initial trepidation at the endeavor. “Until recently I’ve felt kind of intimidated about writing about New York, most notably because my editor — I love her, but she’s a badass — said, ‘Oh, you think you can write about New York?’”

While Wilsey delivered the quote with a hilariously sassy tone, he was clearly serious about the pressures of self-criticality and perfectionism in the writing world. He told me a bit about the plight of legendary New Yorker writer Joseph Mitchell, whom he got to meet while at the magazine and talked extensively about in the introduction to More Curious. At the height of his powers in 1964, Mitchell stopped writing and, until his death in 1996, still came to the New Yorker almost every day without ever publishing anything significant.

Relative mystery still exists about what exactly happened in Mitchell’s mind that led to his silence. Wilsey, however, has gleaned ideas from the memoirs of one of the writer’s secretaries. “They had these flirtatious lunch dates — she was a very good-looking woman — and eventually Mitchell would tell her about what he was working on and how hard it was.” The empathy that Wilsey felt for Mitchell was palpable in his voice as he recounted his literary idol’s struggles. “He tried to bring every piece he wrote to the next level and it became harder and harder for him to do it …a bit of it has come out and its not as amazing … there’s a kind of mania in it.”

Wilsey’s candor is so without pretense that I found it difficult to maintain a critical eye while we discussed. As he told the Mitchell story, I remembered to take in his appearance — a blue messenger cap (which appeared so poetic given his “in” at the New Yorker), a button-down, jeans. His dress and light, baritone voice both evoked a lasting youth — while he spoke with authority and maturity, his vigor and presence quelled all supposes that he is approaching some sort of Mitchell moment.

Wilsey battles the pitfalls of self-doubt through several writing strategies. While he was immensely appreciative of my review of More Curious, he called me out for suggesting that his immaculate fact checking was “of the Wikipedia age.” “I over-research to an incredible degree, but I actually try to avoid web research altogether.” The personalized investigative process, much of which he chronicles within his pieces, seemingly keeps Wilsey focused. The compressed timing of magazine writing also appears to help the writer keep energized in his detective work and retain perspective about the inevitable imperfection of his articles. “When you have an editor and a deadline it’s harder to get caught up in the potential craziness of working in a vacuum,” he says.

Wilsey also generates genuine interest in all of the subjects that he takes on and manages to imbue them with a philosophical depth that usually isn’t instantly obvious. While we discussed “Some of Them Can Read,” his frightening treatise on New York’s rat population, Wilsey recounted a surreal piece of information that, while not making it into the essay, buoyed its thesis. “Some explorers in South America entered a crater that no one had ever entered before. They found these huge dog-like rats, but they were like, pure love, extremely friendly, and vegetarian.” Using the rats as the uncorrupted variable against their more vicious and conniving New York equivalents, Wilsey came to a startlingly deep conclusion about the beasts. “Rats are reflections of us. They are our alter egos.”

While Wilsey can’t help but uncover facts and endlessly theorize about rats, NASA, World Cup soccer, and the other facets of contemporary society that he explores, he doesn’t necessarily want to. “You have to be called to do this thing. This is what I do. Otherwise it’s very lonely and frustrating to have a literary view of the world and not be able to set it down and stop analyzing.” The moxy that Wilsey showed in climbing the literary ladder and the attention he pays his focuses is not as much a desire so much as a necessity.

After discussing his powerful impulse to write for several minutes, Wilsey grabbed the copy of More Curious that I’d brought with me and flipped to its centerpiece, “Travels With Death.”

“I never wanted to write [this as] the main essay, but this dude we met went on this insane monologue.” The dude in question, an eccentric San Antonian interested in the architectural work of Wilsey’s traveling companion, the architect Michael Meredith, presented the duo with a multi-hour tirade about Texas history. Wilsey read his response to the surreal scene out loud: “It put me on alert. I started expecting I’d have to write about all of this, and there’s no surer impediment to a good time than knowing you have to write about it.”

Marfa, Texas, an artist enclave of around 2,000 people where Wilsey lives much of the time, offers the writer shelter from the emotional burden of his constant analysis. “Marfa, though overwhelming in its natural grandeur, allows me to step outside of my mind and just chill, and that’s almost a subversive act for me.” While Wilsey’s first and last essays in his collection focus on Marfa, he doesn’t feel the same internal expectation to chronicle its happenings.

That hasn’t stopped him from receiving a fair amount of derision in the local press. He explains a particularly damning piece: “It basically said, ‘Why does he get to write the book that is going to in some way define or advance the conversation about what this place gets to be?’” Thus, even when Wilsey manages to turn off his internal self-judgment in Marfa, his neighbors sometimes manage to pick up the slack. Despite the stress, however, Wilsey is still in love with the locale. “That’s not the Marfa that I know. Marfa can be edgy, but usually very kind.”

As we left Café High and walked up Haight Street to his reading at the Booksmith, I couldn’t help but think that Wilsey is like his home — full of sharp and often biting insight, but immensely generous and restrained, lacking almost entirely in cruelty. As he regaled me with stories of ’80s quasi-brothels on Haight that were frequented by Urban students and sighed at the sight of another steel-tinged bar with stylist mixologists, I could tell that the mania of Wilsey’s life and mind were all worth it — he’s doing what he has to do.