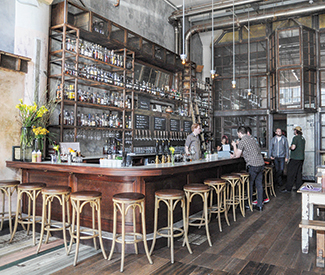 THE WEEKNIGHTER I was hanging out with Steve Jones. I’m pretty sure it was the first time just the two of us were kicking it, even though I’d known him for years and he’d been my editor at SFBG for at least six months. There was supposed to be some kind of Mixmaster Mike event at a loft in the Dogpatch, and when we arrived, there was nothing. So we did the next best thing. We got some drinks.

After chewing on some jerky and tipping back a tipple at Third Rail, one of us remembered that Magnolia Dogpatch and Smokestack (2505 Third St, SF. www.magnoliapub.com) had recently opened nearby. And it was our job, nay, our duty to check it out.

Cruising down Third Street, me walking, Steve pushing his wild looking bike, we nearly passed Magnolia’s front door. “Is it open?” Steve asked. The windows were covered in old newspapers and the exterior looked like some rundown factory.

“I think so,” I replied. “I think I hear music.” As I pulled the door open suddenly it was that scene in The Wizard of Oz where Dorothy steps into Technicolor, except instead of badass musical munchkins, Steve and I were greeted by the smell of barbecue and the clanking and thrumming of people drinking.

Now you are looking at Steve and me. Time has stopped outside on gritty Third Street and the golden light of the wondrous inner world of Magnolia illuminates our faces as we are frozen in wide-grinned delight. And boom! Time picks back up and we step inside. Steve looks at me, “I think we made the right choice.”

“I’m gonna eat the fuck out of everything,” I respond.

There’s a trend that’s getting tired in all of San Francisco’s new bars and restaurants. You know it: reclaimed wood, exposed Edison bulbs, typewriters that, for fuck’s sake, no one will ever use. Magnolia is not like this. Yes it feels old-timey, but in a way that actually seems like it might be real. Housed in a former can factory, Magnolia looks like an indoor beer garden where the workers might have rushed to drink once the foreman blew the whistle. It harks back to the neighborhood’s dilapidated past while enticing San Francisco’s well heeled modernity. It’s magnificent.

And it has beer. Lots of it. Magnolia — an offshoot of Magnolia Pub in the Haight — brews it in mega vats (this is not a technical term) on the premises, and it’s really lovely. The beers have musical names like Cole Porter, or contain Grateful Dead references like New Speedway Bitter and Delilah Jones Rye. Oh yes, proprietor Dave McLean — I, too, am a fan of the Dead. And the food, good lord the food! Dennis Lee from Namu Gaji really did the thing this time calling it “non-denominational” BBQ, or so it says on Eater, because I’m reading that right now since I didn’t take notes. I was eating BBQ and drinking beer, man, I couldn’t take notes… I just wanna know what’s behind the door that says “Dictating.”

Steve and I stepped out of magical Magnolia-land and back onto dreary Third Street. He peddled off on his bike and I wandered over to catch the bus. I popped around the corner to take a piss before my long bus ride, and a girl rounded the corner and almost ran into me. She stopped, looked at my face, looked at my dick, then turned around and continued smoking a cigarette, with her back to me, while texting on her phone. The scene was made weirder by the fact that I was wearing a captain’s hat and probably had BBQ sauce all over my face.

And that, my friends, is how you write a story about a bar.