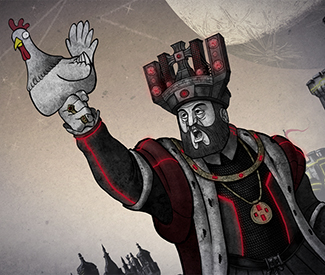 Nintendo is ready to pull on our retro-gaming heartstrings yet again with the newest Super Smash Bros. The fan-service fighter pits four characters against each other in a battle royale, and the now-familiar Nintendo roster of Mario, Link, Starfox, Donkey Kong, and gang will be joined by new third party characters: the blue bomber, Megaman, and everyone’s favorite pellet muncher, Pac-Man. Online play and the ability to create your own fighters using the Wii and 3DS Mii system are enough to get any Nintendo geek doing a barrel roll for joy.

Leonardo Da Vinci has discovered a way to transmute egg yolk into a super-powerful golden substance that jump-starts human intelligence and allows the manipulation of space-time (like you do). This strange, wonderfully chicken-laden concept launches the French Revolution into space, as Renaissance-era kingdoms wage war in a Real Time Strategy-style game. It’s like Age of Empires meets Starcraft meets chickens. This is the game no one knew we wanted until we saw it enslave fowl, and launch to the stars. Bawk bawk bawk la revolucion!

World of Diving is like a fish tank you can dive into, and just relax. It’s not a game in the traditional sense, rife with goals, action, or perilous adventure (though you must avoid the occasional shark). The game outfits the player in diving gear for a leisurely paddle through ocean reefs, sunken ships, and other underwater settings. Your mission? To look at the pretty fish, snap photos of them, and chill out. There are occasional checklists (how many lionfish can you find?), and the randomly generated maps are sure to keep things fresh, but this is definitely a placid affair. Bonus: The game is Oculus Rift compatible, if you want a dose of virtual reality swimming.

The Final Fantasy series is known for its stellar orchestral compositions, so it’s surprising so few games in the series have centered around music. But now that historic injustice has ended! TheaterRhythm is a rhythm game (like Guitar Hero), centered entirely around chibi-versions of well-known Final Fantasy characters. Okay, it is a little strange to avenge the death of Aerith while battling Sephiroth using hip-swinging dance moves, but still … Chocobos, dancing! The quest mode spans most of Final Fantasy‘s 13-plus games, giving every FF fan music to jam to.

The life of a cat seems easy, but this game will convince you otherwise. Cats have goals, dammit, and in Catlateral Damage you must knock over as many of your owner’s possessions as you can within the time allotted. Look, a perfectly whole coffee mug! It’s an obvious invitation for a swat of your paws. The satisfying crash signals gaming success. The demo, out now, features cel-shaded cartoon graphics à la Zelda: The Wind Waker, and your kitty avatar seems to be able to jump with super-feline prowess. But don’t hiss over the small stuff, because you’ll have too much fun swatting the big stuff, like that TV on the dresser.