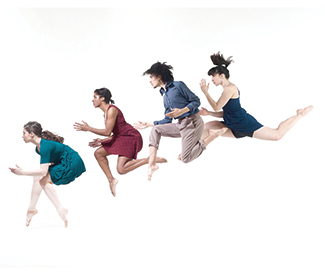 FALL ARTS I wish somebody could come up with a better word than the ugly “locavore,” particularly since it was originally used for cattle. But the idea of eating locally-grown food is fabulous: it’s good for the environment, the wallet, and the state of one’s psyche. The same approach also rings true for the way we feed our spirits. Local artists seed, tend, and harvest a crop that needs and deserves our attention. The sheer variety of Bay Area-cultivated dance offerings this fall could make gluttons out of many of us. Here is a baker’s dozen to whet your appetite. All but a few are world premieres.

For The Imperfect is Our Paradise, Liss Fain Dance’s Liss Fain fashioned her choreography from the cadences of William Faulkner’s prose in The Sound and the Fury. Imperfect promises to be another of her translucently intelligent dances, here performed in designer Matthew Antaky’s reconfigured ODC Theater. Sept. 11-14, ODC Theater, SF; www.lissfaindance.org.

In This is the Girl, Christy Funsch of Funsch Dance Experience reaches out — big time. Known for her exquisite solos, Funsch steps back into ensemble work, with seven dancers, six taiko drummers, and a chorus of singers. Never fear, the core of this look at womanhood is still that wondrous partnership between Funsch and Nol Simonse. Sept. 12-14, Dance Mission Theater, SF; www.funschdance.org.

The world premiere of Multiple Mary and Invisible Jane, by Jo Kreiter’s Flyaway Productions, takes place on the exterior wall of the UC Hastings College of the Law in San Francisco’s Tenderloin. The work gives voice to the homeless women who live in the surrounding neighborhood, whose lives have become even more difficult because of San Francisco rapid gentrification. Multiple is another of Kreiter’s finely crafted, emotionally resonant choreographies that also serves the political and social aspirations so basic to her artistry. Sept. 12-20, 333 Golden Gate, SF; http://flyawayproductions.com.

Jose Navarrete and Debbie Kajiyama’s NAKA honors the late Anastasio Hernandez-Rojas with The Anastasio Project. Mexican citizen Hernandez-Rojas, a longtime US resident, died in 2010 after being taken into custody by the US Border Patrol after re-entering the country. For the multidisciplinary Anastasio, NAKA collaborated with the Oakland Eastside Arts Alliance, whose youth are subjected disproportionally to violence and discrimination — and sometimes lose their lives — in conflicts with authority. Two years in the making, NAKA’s project aimed to help these artists develop their own voices. Sept. 19-21, Eastside Arts Alliance, Oakl; http://nkdancetheater.com/anastasio.

Now with a permanent home at Kunst-Stoff, the Mark Foehringer Dance Project/SF has taken on its most ambitious project yet. Besides choreography, Dances of the Sacred and Profane inspired contributions from motion-capture and digital artists and electronic musicians. Dances offers a high-tech encounter with the French Impressionists — radicals in their own days. Sept. 13-14 and 19-21, Cowell Theater, SF; http://www.mfdpsf.org.

Besides being a choreographer for her own Push Dance Company, Raissa Simpson has also a well-defined entrepreneurial spirit. Following the adage that if you want something done, ask a busy person, Simpson put together a two-program “PUSHfest,” spotlighting artists she thought would mesh well together. The idea is to establish cross-cultural communication in a field where too often, you only go and see what you already know. Sept. 19-21, ODC Theater, SF; www.pushdance.org.

Joe Goode Performance Group is bringing back two radically different works that complement each other poignantly. What do they have in common? They speak of vulnerability, self-awareness, and longing. The 2008 Wonderboy, a collaboration with puppeteer Basil Twist, is tender, poetic, and musical. Goode’s solo 29 Effeminate Gestures, now performed by Melecio Estrella, dates back to 1987; it is fierce, proud, and angry. Sept. 25-Oct. 4, Z Space, SF; http://joegoode.org.

With Jenny McAllister’s 13th Floor Dance Theater, you never know what you’ll get — except that it’ll be wacky, with a skewed sense of humor. For A Wake, the company’s latest excursion into absurdity, McAllister draws inspiration from James Joyce’s Finnegans Wake. I have always been told that the book is a comedy, and perhaps now we’ll find out why. Oct. 16-19, ODC Theater, SF; www.13thfloordance.org.

Dohee Lee is a phenomenon unto herself. Steeped in Korean shamanistic traditions, masked and contemporary dancing, Korean-style drumming, and extended vocal techniques, she brings all of these into play in MAGO, an installation piece in which she looks at the upheaval created by developer of her home island, Jeju. Nov. 14-15, Yerba Buena Center for the Arts, SF; www.doheelee.com.

Both a scientist and a dancer, Katharine Hawthorne asks questions about time — via clocks geological, chronological, biological, and mythic — and the way it manifests itself in our physical bodies. For the intimate Pulse, she recorded her dancers’ heartbeats to explore how their internal senses of time related to external clock time. In The Escapement, she looks at the history of time-keeping, and the way it affects our sense of darkness and light. Nov. 20-23, ODC Theater, SF; www.khawthorne.net.