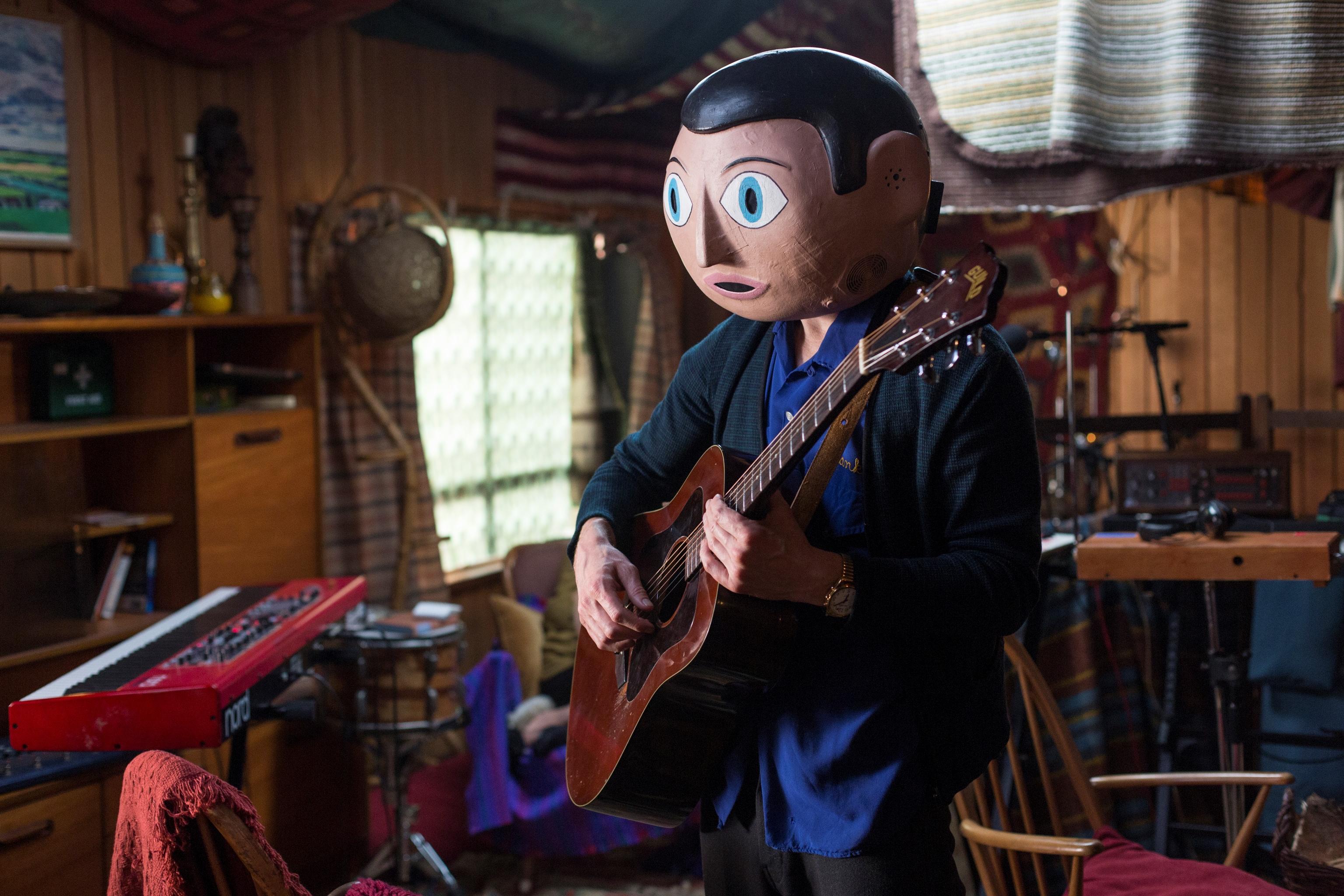 A mask-wearing musician, a Star Trek alum, coming-of-age tales, a rom-com with a sci-fi twist, a rom-com with a zombie twist, and a romantic drama (rom-dram?) with a metaphysical twist are all part of the weekend movie outlook. Read on for reviews and trailers!

Frank Who doesn’t want to be a musical savant, visually riveting, naturally gifted, freed from convention, and liberated of linear thought? The exception might be the doll-headed, damaged namesake of this comedy loosely inspired by the life of late English musician and comedian Frank Sidebottom (real name: Chris Sievey), and real-life Sidebottom sideguy Jon Ronson, who co-wrote the screenplay. And if this loving, very funny, bromantic take on the so-called creative process of rock seems a bit forced at times, that’s only because the movie is so clearly filtered through the archetypal wannabe, made likable by Domhnall Gleeson. His office worker Jon is struggling to write songs when he stumbles across a band, Soronprfbs, after watching their keyboard player attempt to drown himself at the beach. Manager Don (Scoot McNairy) taps the bystander to contribute to the chaos happening onstage, then drags him off for the making of the album. Mysterious leader Frank (Michael Fassbender), who never takes off his massive, faux-happy head, finds inspiration in threads protruding from upholstery. As Jon’s nest egg gets sucked into the recording budget and theremin player Clara (Maggie Gyllenhaal) rages against the interloper, he posts the band’s, er, artistry to YouTube, obtaining the group a coveted gig at South by Southwest. But who really wants this shot at fame? The sideman with a will to power, or the damaged true talent? Director Lenny Abrahamson and Ronson wisely place Frank squarely in the viral video/GIF/Vine-poisoned multiplatform miasma of today, put across all the more powerfully by Gleeson and particularly Fassbender, who reveals a fine singing voice. While cleverly referencing outsider artists big and small by way of right-on original songs by Stephen Rennicks, Frank asks vital questions about motivation and art-making in an era when it seems like everyone is getting their 15 minutes of fame — and we’re getting increasingly weary of eyeballing it and filtering the wheat from the gone-in-a-nanosecond chaff. Some make music because they want to be stars, while others, Frank says, do it because they have little other choice. (1:34) (Kimberly Chun)

If I Stay Chloë Grace Moretz stars as a teen caught in limbo between life and death in this adaptation of Gayle Forman’s best-selling YA novel. (1:47)

Island of Lemurs: Madagascar Morgan Freeman (who else?) narrates this IMAX documentary following scientist Dr. Patricia Wright as she studies lemurs on the island of Madagascar. (:40)

The One I Love Sophie (Elisabeth Moss) and Ethan (Mark Duplass) have hit a speed bump in their relationship — they don’t have fun together like they used to, and even direct attempts to replicate that past magic fall completely flat. Ergo they take the advice of a couples counselor (Ted Danson) and book a weekend at a country getaway he swears has done “wonders” for all his previous clients in relationship trouble. Things get off to a pleasant enough start, but the duo’s delight at recapturing their old mojo becomes complicated when they realize … well, it’s best to know as little as possible going into The One I Love, a first feature for director Charlie McDowell and scenarist Justin Lader that approaches a fantastical narrative idea with a poker face and considerable ingenuity. Duplass and (especially) Moss are terrific in roles that eventually require some very complicated (and subtle) nuances. (1:31) (Dennis Harvey)

Sin City: A Dame To Kill For Frank Miller and Robert Rodriguez co-direct this sequel to 2005’s Sin City, based on Miller’s graphic novel series. (1:38)

To Be Takei The erstwhile and forever Mr. Sulu’s surprisingly high public profile these days no doubt sparked this documentary portrait by SF’s own Jennifer Kroot (2009’s It Came From Kuchar). But she gives it dramatic heft by highlighting the subject’s formative years in World War II Japanese-American internment camps, and finds plenty of verite humor in the everyday byplay between fairly recently “out” gay celebrity George and his longtime life and business partner Brad Altman — the detail-oriented, pessimistic worrywart to his eternally upbeat (if sometimes tactlessly critical) star personality. We get glimpses of them in the fan nerdsphere, on The Howard Stern Show, at Takei’s frequent speaking engagements (on internment and gay rights), and in his latter-day acting career both as perpetual TV guest and a performer in a hopefully Broadway-bound new musical (about internment). Then of course there’s the Star Trek universe, with all surviving major participants heard from, including ebullient Nichelle Nichols, sad-sack Walter Koenig, thoughtfully distanced Leonard Nimoy, and natch, the Shat (who acts like a total asshat, dismissing Takei as somebody he sorta kinda knew professionally 50 years ago.) We also hear from younger Asian American actors who view the subject as a role model, even if some of his actual roles weren’t so trailblazing (like a couple “funny Chinaman” parts in Jerry Lewis movies, and in John Wayne’s 1968 pro-Vietnam War film The Green Berets). Even if you’ve tired of Takei’s ubiquity online and onscreen, this campy but fond tribute is great fun. (1:30) Sundance Kabuki. (Dennis Harvey)