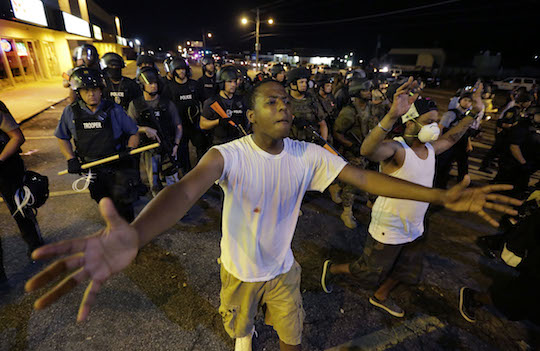 As the nation’s eyes watch police officers in Ferguson firing rubber bullets and tear gas into crowds of protesters, one UC Berkeley sociologist is exploring how and why such violent conflicts erupt in the first place.

Nicholas Adams and his team call themselves Deciding Force. Its goal? To prevent violence between police and protesters at peaceful demonstrations through deep data analysis of the Occupy movement.

“There’s a misconception that police have a single style or repertoire to approaching protests,” Adams told the Guardian. “They have a range, and they should know better how to use these tools.”

Adams hopes to facilitate free speech by demonstrating best practices in nationwide police tactics, to allow peaceful protesters to trumpet their message without the threat of violence. The study, he said, is made possible by the variety of geographic locations the Occupy movement took place in. The different municipalities and varying levels of police use of force provided a buffet of data for Adams and his fellow researchers to compile and parse.

A video about the project.

They started with news reports of various Occupy movements nationwide, which were then compared to other local and national news articles for accuracy and to help identify bias. Even that process revealed interesting data, he said.

“Media bias is most often a bias of omission,” he told us. “You go to protest events and what happens most often is a news outlet won’t report on it. Fox News outlets across the country reported on the Occupy movement at drastically low rates. If an ABC affiliate reported on an Occupy (encampment) 100 times, Fox News affiliates reported it three times.”

The researchers then handpick relevant data from those news articles and broadcasts. The next step is even trickier (and wonderfully geeky).

Adams and the researchers trained computer programs to pick similar data from the over 8,000 news reports, automating the process. Articles from Boston, Chicago, New York, San Francisco, and more than 200 cities with Occupy movements are parsed for patterns. Did the police wear riot gear? What formations did they use? Were horses present? Assault vehicles? Was the crowd mostly Latino, black, white, Asian, or a mix? Were the Occupiers sitting or standing? These are the few of the hundreds of variables crunched by Adams’ team.

After the variable compiling, the computer’s usefulness ends and the human element picks up again, as Adams and his sociologists then sift through the patterns to see what elevates conflict between police and protesters. In the end, he hopes to be able to show police departments what specific actions can de-escalate violent situations.

The team has been at it for two years, and already the data is yielding some results. Police skirmish lines, for instance, are a heavy indicator that violence will occur.

“You’re facing off against protesters,” he said. “It’s called a skirmish line for a reason. You’re setting up skirmishes.”

But Adams’ research isn’t just about aiding police forces, it’s about holding them legally accountable for escating violence, he said.

“You can start to, from a legal standpoint, establish liability with research like ours,” he told us. “If we reach out to police departments later on attorneys can hold them accountable for their actions.”

And with that information in hand, maybe future incidents like the clashes in Ferguson may be prevented. At the very least, there may be a stronger legal mechanism with which to hold police accountable for clashes with citizens.

You can read more about Deciding Force’s research here, and support them through their IndieGoGo campaign.