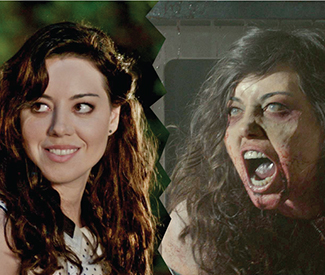 FILM Consider the zombie comedy — more specifically, the zombie romantic comedy. Simon Pegg of 2004’s Shaun of the Dead famously coined the term “zomromcom,” and it makes sense that the genre has only continued to grow. Even the best zombie movies hit the same ol’ story beats: the dead rise up, a dwindling group of survivors bands together to fight back, someone gets yanked through a window and devoured by a hungry horde, etc. The variables tend to be things like cause of outbreak (disease, aliens); speed of ghoul (from lumbering to sprinting); and outrageousness of gore (the gold standard remains Lucio Fulci’s 1979 eye-gouger, Zombie). But just add in some laughs, or better yet, yearning young hearts, and you’ve got new sources of tension and plot twists galore.

The 2013 Warm Bodies (zombie meets girl, girl loves zombie back to life), 2004’s Zombie Honeymoon (self-explanatory), and the 1993 Bob Balaban-directed My Boyfriend’s Back (in which Matthew McConaughey appears as “Guy #2,” shortly before his breakout role in Dazed and Confused) are other zomromcom examples. Now there’s Life After Beth, which keeps the pun-tastic naming tradition of the genre alive. Like Shaun of the Dead, it’s about a relationship on the rocks that happens to coincide with a zombie outbreak. The twist is that the girl, Beth (Aubrey Plaza), is among their numbers, and may even be Zombie Patient Zero. Her boyfriend, Zach (Dane DeHaan), and parents Maury and Geenie (John C. Reilly and Molly Shannon) are just happy she’s alive again. Or is she?

Beth’s “resurrection” (as her dad puts it) unfolds like something out of The Monkey’s Paw, only when she knocks on her front door after apparently bursting out of her grave, she’s suspiciously preserved and has no memory of suffering that inconveniently fatal snakebite. At first, everyone’s overjoyed; Maury can mend fences with the daughter whose final words to him were “Dad, you’re being annoying,” and Geenie can finally snap all the photos she regretted not taking. It’s more complicated for Zach, whose last conversations with Beth 1.0 included the revelation that she wanted to “see other people,” not that she remembers any of that — and whose own family members (Paul Reiser and Cheryl Hines as his distracted parents; Criminal Minds’ Matthew Gray Gubler as his aggro-nerd brother) are too self-involved to offer any support.

Not that they’d know where to begin, since Zach’s romantic troubles soon become supremely spooky. Maury is as dead-set on keeping his undead offspring a secret (“She died, and she’s not dead now. I don’t know why. Who cares why?”) as he is with keeping her in the dark about the fact that she’s back from beyond. Though Zach would rather be honest with Beth — he’s bummed he wasn’t more open with her the first time around — he goes along with the ruse until things get weird. Like, bellowing-fits-of-anger, window-smashing, decaying-skin, smooth-jazz-obsessed weird. “I kinda wish she’d stay dead,” he admits. It isn’t long before Beth’s affliction begins spreading through the greater Los Angeles area, and the inevitable chaos reigns.

Life After Beth was written and directed by Jeff Baena, whose biggest prior credit is co-writing David O. Russell’s I Heart Huckabees (2004), but who also happens to be dating Plaza. Known for her dry, deadpan delivery, Plaza (2013’s The To Do List, 2012’s Safety Not Guaranteed) is more prickly than other leading-lady comedians, like her Parks and Recreation co-star Amy Poehler. Even dressed in Beth’s sweet polka-dotted dress, Plaza is equal parts snarky and unpredictable, a vibe that perfectly suits the scene where Zach tries to woo her with a song he’s written for her. “This fucking sucks!” she growls, before exploding into a rage that ends with a beachside inferno involving an unfortunately situated lifeguard stand. She’s high maintenance. She’s shrill, demanding, jealous, and terrifying. And her boyfriend may have written her the part, but Plaza is 100 percent in control of this character — even in the scenes after Beth has morphed into a teeth-gnashing monster, she appears to be having a blast. Did I mention that zombies in this movie are obsessed with smooth jazz?

Zach is the first romantic leading role for DeHaan, who’s best-known for sinister turns in Chronicle (2012) and The Amazing Spider-Man 2. Though he spends most of his scenes with Plaza recoiling from Beth’s antics, his emo intensity is the perfect foil for the easygoing Reilly, whose cool-dad persona (he keeps a joint stashed for emergencies) starts to crack as Maury becomes more desperate to protect his daughter.

Life After Beth could have dared to shove the skewer a little deeper into the zombie genre — the notion that Haitian voodoo causes the dead to rise does get a well-deserved knock, and there are some funny bits with zombies who behave in non-traditional ways (some of them even deliver the mail). But aside from Plaza’s oversized performance, the humor here is surprisingly subtle, and often of the muttered-under-the-breath variety. As for the romance, the movie cops out a little bit by bringing Anna Kendrick in about midway through as Zach’s childhood friend Erica, a living, breathing alternative to Beth — who by that point is displaying aggressive mood swings and giving off killer death breath. But there’s also the suggestion that giggly airhead Erica, who agrees with everything Zach says and whose favorite word is “Ohmygod!”, isn’t much of an upgrade. A different kind of zombie, perhaps? *

LIFE AFTER BETH is available for viewing on DIRECTV.