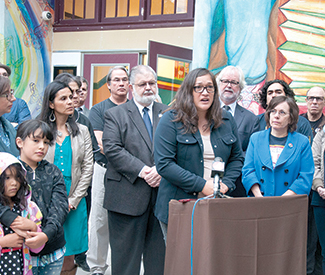 The first day of school was Aug. 18 in the San Francisco Unified School District, but a group of teachers started the day with a press conference announcing the possibility that they could soon go on strike.

The teachers union, United Educators of San Francisco, announced the results of a strike authorization vote held the previous Thursday. The vote, which was the first of two required to authorize a strike, resulted with an overwhelming “yes” with 99.3 percent of teachers saying they would take that step if necessary.

UESF President Dennis Kelly noted that 2,251 teachers had voted, and all but 16 were in favor of authorizing the union to go on strike if contract negotiations with the school district do not result in an acceptable settlement. “It’s pretty unequivocal,” noted UESF spokesperson Matthew Hardy, “and it demonstrates the need for teachers to have a wage that allows them to live in San Francisco.

On Aug. 14, teachers streamed onto the grounds at George Washington High School to cast ballots for the first strike authorization vote. Among them was Kelly Lehman, a first grade teacher at Mira Loma Elementary, who said she’d recently been forced to leave her longtime Mission District residence under threat of eviction.

“I am one of those people who has been ‘Googled’ out of the city,” she said. “I used to be able to afford the city.”

Since she relocated in Marin County, Lehman said her commute has gone from 10 to 40 minutes each way. “It means either less time with my family, or less time with my class,” she noted, adding that she ended up purchasing a car and now drives to work.

Public school teachers’ contract ended June 30, but contract negotiations began months earlier, in February. In June, the negotiations went into impasse, which means the union and district were unable to meet without the presence of a mediator. If mediated negotiations now underway don’t result in a settlement, the process would move to fact finding, where parties on either side of the bargaining table would make presentations to a neutral party, who would in turn prepare a report and make recommendations. If that still doesn’t result in an agreement, the district could impose its last and best contract offer and the union could opt to go on strike, provided it wins approval in a second strike vote.

Hardy said it would likely take weeks before a final outcome is determined, but he stressed that “the goal is to get a settlement.”

While there are several issues of contention, the major point of disagreement comes down to teachers’ salaries. Teachers have demanded a 21 percent pay raise over three years, saying that amount is necessary for educators to be able to provide for themselves in San Francisco. But the district, which has made an offer that would raise pay by 8.5 percent instead, maintained in a statement that it “has not received increases in revenue sufficient to raise salaries enough to keep up with the high cost of living in San Francisco.”

Ken Tray, a UESF organizer and longtime social studies teacher at SFUSD, said he was alarmed by the trend of schoolteachers being forced out of the community. “Today there are many, many teachers facing eviction,” he said. “One of my oldest teacher friends, who was voted best teacher at Galileo High School and then at Lowell High School, is leaving San Francisco because he is losing his apartment. So that is a loss not only to him and his wife, but it’s a loss to his community. What kind of community drives its…best teachers out of town? What about the soul of San Francisco?”

The next mediation session is scheduled for Sept. 2. “We are currently in mediation with UESF and remain hopeful that we can resolve our differences and reach a fair and equitable compensation agreement,” SFUSD Superintendent Richard A. Carranza told the Guardian via email. “We are a public agency and our revenues and expenditures are carefully monitored and audited on a regular basis. Anyone can view our detailed budget and auditors reports online. We are committed to giving our employees much deserved raises but we are also committed to being fiscally responsible which means submitting a balanced three-year budget to the state with a minimum reserve.”

The SFUSD statement indicated that the district expects the total cost of salary and benefits for teachers to increase by at least 18.5 percent over the next three years. But Hardy was skeptical of those figures. “That’s crazy,” he said after reviewing the district statement. “I don’t know how they ran those numbers.”

Claudia Delarios Moran, a former paraprofessional at SFUSD and Restorative Justice coordinator, started her comments at the Aug. 18 press conference by saying she was excited to be taking her kids to their classrooms for the first day of school. “They’re so eager to find out who their teachers are, which of their friends are assigned to their class, and to settle back into the warmth and familiarity of their school site, which is filled with staff who are consistently affectionate toward them and interested in their academic and social development,” she said. “These days, that kind of environment for students and families is more crucial than ever, given what they’re up against. Many of our students and families are living on the margins, due to their immigration status, their language capability, and their limited income. They’re stressed out — due to fear that they’ll be displaced from their homes and never find another place in their neighborhoods that they can afford. … And though the work is hard, educators know that it is a great privilege to serve our children — to help the working families of San Francisco survive here.”