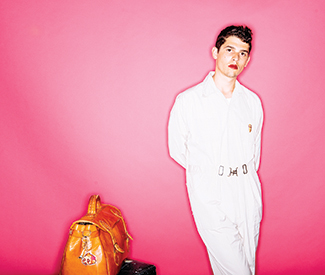 SUPER EGO “I’m starting my own line of lipstick called Freak Flag, the proceeds of which will go towards funding sex change operations,” 24-year-old tech house sensation Nick Monaco told me over the phone, as he drove to his studio in San Rafael. “I started wearing lipstick onstage and to afterparties as a kind of shtick, but I began to notice all the hypermasculinity that’s present on certain house scenes, the quasi-homophobia. Which is so weird, since house music was nurtured by the LGBT community. So this is my way of being a better ally.”

Monaco’s fresh-faced idiosyncrasy in a tech house scene rife with unfortunate conformity extends not just to his goofy stage persona — part bargain-basement Lothario, part kids’ Halloween costume closet — but, essentially, to his music as well. Hypercool new album Mating Call (out on Crew Love Sept. 8) is a loose-limbed squiggle of neon pop ideas, slippery grooves, and good jokes that plays off the styles of Monaco’s mentors, Soul Clap and the dirtybird crew, while going off in a few great, woo-woo directions all his own.

Monaco grew up in Santa Rosa. (“You can imagine what my exposure to club music was like out there,” he laughs.) But at 17 he wandered into a house club in Switzerland and was hooked. “I had to go to Europe to discover this American music, in Euro-house form. Then after college, I was working as a DJ in Barcelona — on the beach at Sitges, I heard [Boston duo] Soul Clap for the first time and thought: That kind of sound is exactly what I want to do. So I wrote to them out of the blue. And they took me under their wing.”

“I’ve been listening to a lot of early ’90s New York house records from the likes of Masters at Work, who combined Puerto Rican music with house, and acts like Freddie Mercury, Arthur Russell, Talking Heads, and Deee-Lite,” Monaco said. (Russell’s mellow experimentalism seems to be the guiding force on Mating Call.) “But I’ve been recording at TRI Studios, the Grateful Dead’s old studios, and there’s all these great old-school musicians there jamming. I think as a result this album was a lot more organic, in sound and structure. I started out with clear ideas, but things really expanded to other places.”

Monaco’s been developing a live show since March, taking the one-man-band-with-visuals approach, and will be touring extensively in the months ahead. “You have no idea how many nightmares I’ve had where I press the wrong button onstage,” he says in mock terror. “But I’m ready to do this.”

Oh, and the shade of that lipstick he’s planning to sell? “Mating Call red, of course.”

Kieran Hebdan, aka Fourtet, jazzy intellectual of the UK bass scene, goes head to head with Jamie xx — yes, of ruminative indie erotics The xx — whose own deep electronic explorations have taken him to the limits of pop. Two biggies, lotta bass.

“There’s a kind of cultural compression going on, similar to audio compression, where everything has to be ‘punched up’ to the same intensity or people feel lost. What the fuck is so wrong with being lost?” Terre Thaemlitz, aka trans musician and philosopher DJ Sprinkles, told me last year. Then she proceeded to send the Honey Soundsystem party into an intense, wonderfully deep spiral. Now she’s back to do it again.