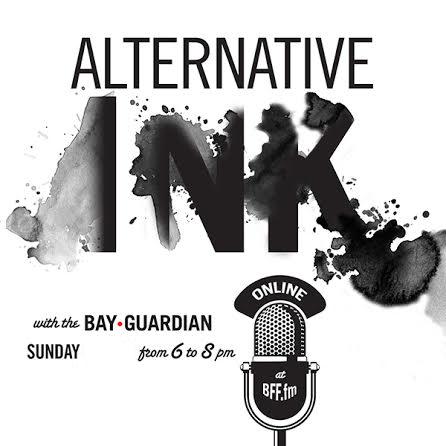 We Guardianistas aren’t just tethered to our keyboards, writing stories for our weekly print and daily online editions. We’re also working the microphones at public events and online broadcast outlets on a regular basis, including our biweely Alternative Ink show on BFF.fm.

Last night’s show (which you can listen to here) was something special as News Editor Rebecca Bowe broadcasted live from the Block the Boat protest outside the Port of Oakland, discussing events as they unfolded with the in-studio staff of Editor Steven T. Jones, Music Editor Emma Silvers, and reporter Joe Fitzgerald Rodriguez.

That was just one of several topics that we covered last night’s show, including the battle over contentious political endorsements by the San Francisco Democratic County Central Committee, the strange political dynamics around this fall’s BART board race, and ongoing clashes between protesters and police in Ferguson, Mo and their implications here in the Bay Area, where the SFPD shooting of Alejandro Nieto remains a source of unresolved tension. In the musical portion of the show, Silvers even debuted a just-released song about the Ferguson standoff by J. Cole.

We also talked about Burning Man and how the public sees the modern incarnation of this homegrown event, something that Guardian readers weighed in on live during the show through the SFBG Twitter feed. And if you want to hear more about Burning Man from Jones — a longtime burner and author of The Tribes of Burning Man — you can also catch his hour-long appearance yesterday on the Expanding Mind podcast and look for his upcoming cover story on Burning Man in the Bay Guardian this Wednesday.