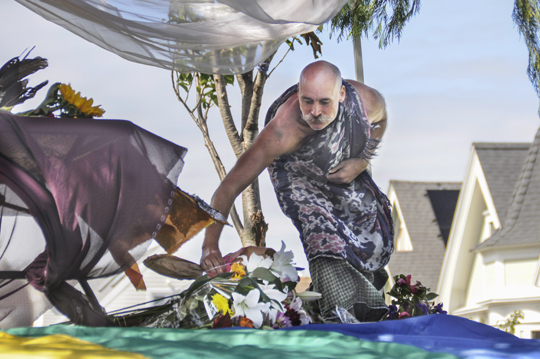 An unseasonably warm afternoon breeze wafted the scent of burning sage over Duboce Park yesterday, as a crowd of 200 or so mourners joined hands in a giant prayer circle to celebrate the life of Feather — the Radical Faerie community member found beaten nearby on Sunday morning.

Chimes rang in the sunshine, and colorful swaths of cloth twirled from a makeshift altar, heaped with flowers, perched atop the park’s central hill. A large, iridescent feather stood up from the grass.

Faerie friends and spiritual conductors spoke of Feather’s life and led a ritual of letting go. Passersby stopped to partake in the ritual or watch the particularly San Franciscan scene.

At 3:33 — the moment Feather was being detached from life support at SF General Hospital with his family and husband present — Faerie Justime asked the crowd to observe several minutes of silence.

Then declaring that Feather’s “spirit is free,” he led everyone in taking three deep breaths. Flowers were distributed to the crowd, which collapsed into a mass of hugs and remembrance, after raising linked hands and vowing that “Faeries meet again.”

Police are investigating the case as a homicide, and looking for a white male in a dark-colored hoodie. Security footage that may have captured the assault has not been released by the police. They are asking anyone with relevant info please contact 415-575-4444 or text TIP411 with “SFPD” at the start of the message.