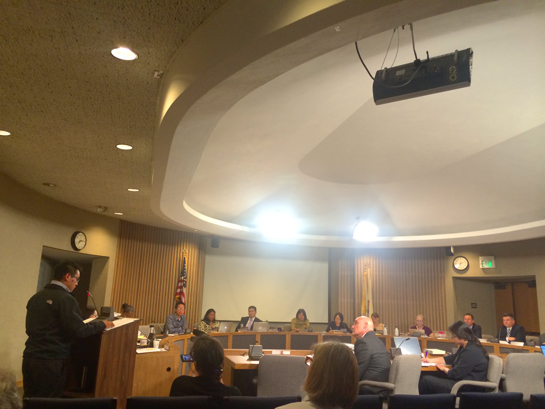 Waves of Central American child refugees are landing in San Francisco, fleeing violence in their home countries. A growing number of supporters are lending aid, and now the San Francisco Unified School District is the newest group to join the cause.

“We are a nation of immigrants, which is often forgotten when we talk about ‘those kids,'” SFUSD Superintendent Richard Carranza said to the board. “These are our children.”

To help them, he said, “we will move heaven and earth.” Carranza then pledged to forward the text of the resolution far and wide, saying he hoped the SFUSD’s efforts would cross the desk of President Barack Obama, and set an example for the rest of the country.

Child refugees coming to San Francisco face language barriers, inadequate city services, and major gaps in their education. The resolution, authored by board member Matt Haney, will beef up teaching resources for child refuegees, connect these children with counseling services, and enroll them in specific classes geared towards new English learners. The district will also soon hire an administrator to coordinate these new and existing services for refugees. This new administrator will need the qualifications of a social worker, the district said, and it’s easy to see why.

One counselor put the kids’ needs this way: normal teenagers have it hard enough, but adjusting to school with the trauma of near-death behind you can be almost impossible.

“These kids have a set of needs which are at a higher level than any set of kids we deal with,” Haney said.

The US Department of Health and Human Services reported 175 unaccompanied minors were released into custody of San Franciscans, though federal data shows many hundreds more wait in the wings for aid. Some of these refugee children will join school in the new year, which starts Monday, but many are already in attendance.

Dawn Woehl, a counselor with the Newcomer Pathways program at Mission High School, told the board during public comment she started noticing more child immigrants who spent time in detention centers in New York and Texas.

“We may not know much about each individual family, but we know enough about the trauma they’re facing,” she said. After she spoke to the board, she told the Guardian that wraparound services for mental health are most needed.

“We take care of the basic needs first,” she said, “but counseling is where we get stretched.”

These children and teenagers often come from towns where gangs recruit new members through high schools. Those that refuse to join up meet violent fates: rape, dismemberment, and death. With those challenges, it’s no wonder that many of these kids show up in San Francisco with gaps in their learning, and significant need of counseling.

“The need for Spanish-speaking therapists is high,” Woehl told us.

The Newcomer Pathways program is a successful one, and alumni of the program came to the board to laud the proposal to aid the refugees.

“I was born and raised in Guatemala, I emigrated here when I was 14 years old,” Anna Avalos Tizol, now 21, told the Board of Education. “I had to learn the language, the culture, and work to help my family back in Guatemala. It was a culture shock.”

But in the end, the young student found success at Mission High School. She’s now a senior at UC Santa Cruz, and interned in Washington DC, where she witnessed child refugees testifying before Congress, telling them of the cold hard floors and thin sheets of their detention centers.

“When we come here, we give up everything. Our home and our loved ones,” she said. “Remember: all children are sacred.”