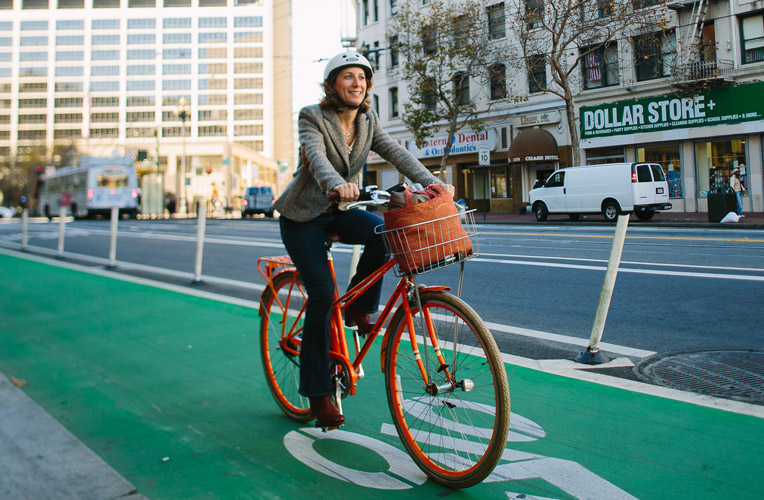 San Francisco cyclists are losing a key advocate — but this and other US cities may next year gain a knowledgable new leader for Vision Zero, the ambitious program for eliminating all pedestrian deaths — with today’s announcement by Leah Shahum that she is stepping down as executive director of the San Francisco Bicycle Coalition at the end of the year.

Shahum has been accepted into the German Marshall Fund Fellowship, a four-month program where she will study European success stories in the Vision Zero concept, focusing on cities in Sweden, the Netherlands, and Germany, before returning to the US to work on programs that reduce traffic-related fatalities.

“They’ve made huge progress after they started with Vision Zero in the late ‘90s,” Shahum told the Guardian. “I’m really passionate about the potential of Vision Zero in San Francisco and other US cities.”

At the SFBC, Shahum worked her way up from a volunteer to becoming executive director 12 years ago, presiding over the organization becoming the city’s largest grassroots, member-based advocacy organization, one that has a strong influence at City Hall.

Shahum has also sought to broaden the SFBC’s mission, working closely with organizations such as Livable City and Walk San Francisco to challenge paradigms and funding models that heavily favor the automobile on the streets of San Francisco.

“The work we’ve been doing at the Bike Coalition has long been broader than just biking,” Shahum said. “The work we’re doing benefits all road users and I think it’s important to bring everyone into this discussion.”

“It’s really sad to see her go and we’ll dearly miss her tenacity and leadership in San Francisco,” Schneider told the Guardian. “But I’m thrilled that she’s working on Vision Zero and she’ll be a huge asset in this country.”

While the Board of Supervisors adopted the goals of Vision Zero earlier this year, that program has yet to be fully defined or funded, particularly after Mayor Ed Lee ditched a fall ballot measure that would have increased the local vehicle license fee, which would have dedicated some funding to pedestrian safety improvements.

“We need to really figure out what Vision Zero means for a US city, so we can learn a lot from European cities,” Schneider said. “In order to implement Vision Zero, we’re going to need funding to replace our obsolent traffic infrastructure that valued speed over safety.”

Shahum said it was a good time to make the transition and focus on Vision Zero, which will be the subject of an international conference she’ll attend this November in New York City, which has been leading the way on the concept among major US cities.

“It’s at the valuable crossroads of injury prevention and sustainable transportation,” Shahum said. “I’m excited to take Vision Zero to the next level, not just in San Francisco, but around the nation.”

SFBC put out a statement commending Shahum for her 17 years of work with the SFBC and announcing it will be conducting a nationwide search for a new director.

“We thank Leah immensely for leading our community’s efforts to make San Francisco a safer, more inviting place to bike and a better place for all of us to live,” SFBC Board of Director President Lawrence Li said in the statement. “Leah leaves behind a legacy of one of the most bike-friendly big cities in America and one of the most well-organized and effective membership groups in the country.”

Shahum said she’s not sure exactly what form her post-fellowship work will take, but that she’s excited about the possibilities of this opportunity.

“I think it’s time for some new adventures,” Shahum told us. “As much as I love what we’re doing in San Francisco, things have to move faster to be meaningful.”