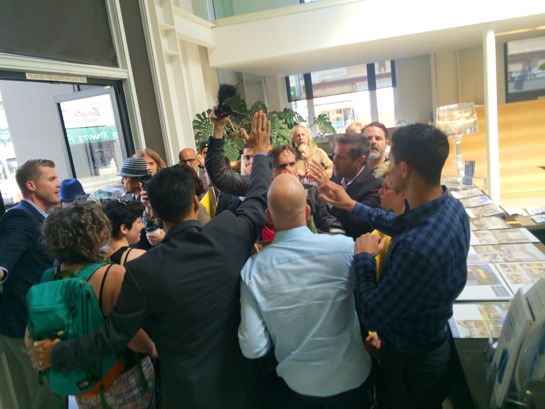 Native San Franciscan Benito Santiago, 64, joined a protest Aug. 12 in an attempt to remind his evictors that he’s a human being – not a roadblock to profit.

Santiago is facing an Ellis Act eviction from his 47-year Duboce Triangle home, where his monthly rent is just below $600.

Clad in a stylish blue fedora, Santiago and a dozen or so protesters filed into Vanguard Properties to deliver a letter asking Vanguard co-founder Michael Harrison to rescind his eviction. Harrison initiated an eviction proceeding against Santiago last December through his corporation, Pineapple Boy LLC. But by the end of the protest, Santiago and other tenant activists were physically pushed out of the building by Vanguard representatives in a show of aggression.

Before it got to that point, protesters called out Harrison for exploiting the Ellis Act for profit.

“We do not believe that you, Michael Harrison, are ‘going out of business’ which is the purpose of using the Ellis Act. We know that instead you are exploiting a loophole in state law for your greed.”

Suffice to say, Vanguard representatives didn’t accept the letter. But the message still got across: The protesters brought a bullhorn.

“My name is Benito Santiago,” Santiago blared, standing at the front desk, but was soon interrupted. A young-looking man in a grey suit approached protesters and asked them to leave.

“I’m calling the San Francisco police,” he said. Santiago may have approached the business with a bullhorn, but he has much to lose.

While Vanguard may perceive Santiago merely as someone who doesn’t offer monetary value, he’s of much value to the developmentally disabled children he teaches at San Francisco Unified School District.

The protesters intended to make these points to the folks at Vanguard. But before words could be exchanged, a crowd of Vanguard workers (real estate agents or employees, perhaps?) swooped in and physically carried out the protesters.

Fred Sherbun-Zimmer held her protest sign and chanted as one Vanguard agent placed hands on her back and swiftly pushed her out. Peter Menchini, a videographer, held his camera high and away from the snatching hands of real-estate experts turned vigilantes. Poet and activist Tony Robles had a paper slapped out of his hand by a Vanguard employee, before protesters were pushed out in a wave behind him.

As you can see from the video, things turned downright nasty as the real-estate representatives shoved and pushed the anti-eviction protesters as well as journalists there to document the event. (They even tried to yank my phone out of my hand.)

By the time the SFPD arrived, things had settled down. No arrests were made, and after a few sidewalk declarations by bullhorn, the protesters cleared the scene.

Afterwards, Santiago told us his housing prospects aren’t looking good. The Bill Sorro Housing Program helped him file many affordable housing applications, but he hasn’t gotten any word back yet. The rent he pays now eats up a hefty chunk of his paycheck, leaving little for basic expenses by the end of the month.

“I’m getting lots of positivity from family,” he said. And he does have an extension, until December, to find a new apartment. But, he noted, with median rents almost reaching $4,000 in San Francisco (they’re actually at $3,200, but that’s still bad), his chances of staying in the city are slim.

“I might be bad at math,” he told us, “but that seems like shooting for the moon.”

From its brief on Harrison:

Michael Harrison is the co-founder of Vanguard Properties, where he specializes in “residential investment properties.” He is a property flipper: his shell company Pineapple Boy LLC bought the building in November 2013 and tried to evict Benito and the two other tenants immediately. Vanguard Properties is currently involved in a number of luxury property developments in the Mission District and Duboce Triangle area including the development at 19th and Valencia that in February 2014 set record sale prices for the neighborhood.

Santiago did have some flickering hope when an in-law unit behind a garage next door went on the market for rent. His hope was deflated, though, when his friend told him the rent for the single room.