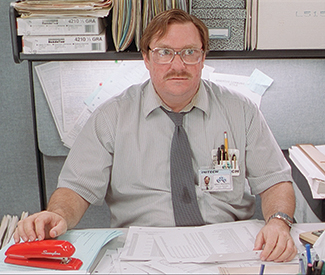 FILM For anybody who has ever had to put up with a creepy boss, annoying co-workers, or a soul-sucking work environment — and that is most likely all of us, at some point in our lives — Mike Judge’s 1999 comedy Office Space has become a supremely entertaining and highly relatable touchstone for its razor-sharp take on office politics and corporate culture.

Written and directed by Judge, who also created Beavis and Butthead and King of the Hill, along with the recent HBO show Silicon Valley, the movie has gone on to become a cult classic, with a variety of quotable lines (“Yeah, I’m gonna need you to go ahead and come in tomorrow … that would be great”) and cultural references (do you have the requisite pieces of flair?)

Office Space fans are in for a treat this weekend when SF Sketchfest presents a special 15th anniversary screening in 35mm at the Castro Theatre, with actor Stephen Root — who plays the stapler-obsessed Milton — in person for the festivities.

“I don’t think there’s a set that I go on where some part of the crew doesn’t have something for me to sign from Office Space — it’s its own little animal, much like Rocky Horror was in its day,” says Root.

“For me it’s a constant amazement that it continues to get a new audience; people who weren’t born [when it came out] get it, people who enter the work force get it, and it keeps a life of its own. It’s about the interplay of the people in the office. That’s universal.”

While Root has fond memories of working on the film, he says that bringing the mumbling, mistreated, and bespectacled Milton to life did present some challenges, particularly when it came to wearing the character’s signature glasses.

“They were a nightmare!”, he remembers. “They were about a half an inch thick at least, and I had to wear contact lenses behind those glasses to be able to see at all. I didn’t have any depth perception whatsoever, so whenever I had to reach for something during a scene I had to practice it because I couldn’t tell where it was — just reaching for the stapler and putting it to my chest, I had to practice that, because I could have reached out and missed it by five inches.”

That stapler, the red Swingline that Milton prizes (and loses), has gone on to become a pop culture icon of its own — a fact that still makes Root laugh.

“There was no red Swingline stapler [when the film was made]. I have one of the props, and Mike [Judge] has another one. Who knew it would start a cottage industry for staplers? I see them every week — people want me to sign them. It is what it is, it’s crazy, but it’s great, and it makes me smile.”

While he has appeared in many other films and television shows (including NewsRadio, King of the Hill, and Boardwalk Empire) since Office Space, Root admits that he’s recognized as Milton most of the time — and that’s fine with him.

“I always tell everybody, my obituary will be ‘Milton’s dead!'” Root laughs. “And I’m okay with that!” 2