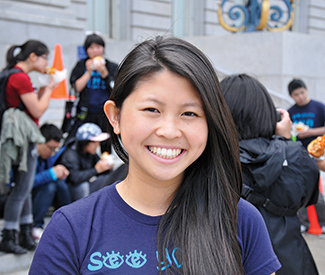 The first would raise the city’s minimum wage to $15 an hour by 2018. The second, known as the anti-speculation tax, would impose a steep financial penalty on real estate investors who sell apartment buildings within five years of purchase, an effort to reverse the rising trend of Ellis Act evictions and limit skyrocketing rental prices.

High school student Alice Kuang, who has been active with Youth MOJO since last year, said she felt the effort to preserve affordability was critical for Chinese families who typically earn low wages. “I lived in an SRO in Chinatown for 13 years,” she explained, referring to a single-room occupancy hotel, a dormitory-style housing complex. Throughout the city, thousands of low-income tenants rely on SROs for affordable housing, but these units have been subjected to price increases and have started to become lost as affordable housing stock when they’re listed as short-term rentals on Airbnb.

“In the SRO, it was like one big community,” Kuang said. “Everyone supported each other. Like my mom knew exactly who was boiling water and then, to make sure the water didn’t spill over, she would run up to knock on people’s doors and be like, hey, your food’s done. It was a really strong community. I remember living there since I was born. It was a very small room. The four of us lived in it — we had a bunk bed, and another bunk bed, basically.”

Jessica Ng, a recent high school graduate and Youth MOJO member, said she was focused on advocating for the minimum wage proposal. “One of my parents became unemployed last year so it really took a toll on me, and made me realize that I have to also help,” she said, “like paying my part of the bill, or paying for groceries even.”

She said an internship with Young Asian Women Against Violence helped her earn some supplementary household income. “When I started getting a paycheck every three weeks or so, I started to pay my part of the bill,” she said. “With an increase in the minimum wage, it would really help with people who are my age who are going to college and want to help their families.”