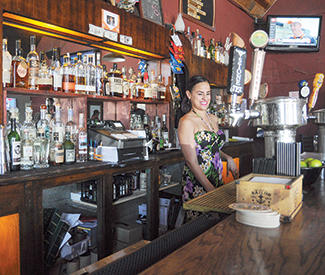 THE WEEKNIGHTER It’s a funny thing to be filling out a job application and have to put your previous employer as Tony the Pope. But that’s the name I know him by, and truthfully, I don’t wanna know his real last name, anyways. I prefer to have at least a little bit of mystery in my life.

I had been working at The Unresolved Love Life of Evelyn Lee, which may be the longest name for a bar ever, when I got news that the bar had been sold to Tony and would now be called Mission Hill Saloon (491 Potrero, SF. 415-552-5545)… again. It had been Mission Hill before it was Evelyn Lee, and apparently Tony was changing it back. Regardless, I came to love working at the place and didn’t care what it was called as long as I had a shift or two.

Depending on the bar, the regulars can either be the best or worst thing about it. The jury is still out about which category Mission Hill’s falls into. Or at least, that’s the kind of shit I’d talk to them while behind the bar. A bartender’s best weapon is his wit, and working at Mission Hill Saloon was a good test of mine every time I was at the stick. The crowd ranges from hipsters to cooks and construction workers — and all of them are prepared to give you a hard time for absolutely no reason at all. And that’s just how I like it.

I experienced one of my most ridiculous San Francisco moments ever while working there. I’d been chatting with a girl on OkCupid, and we had made plans to grab a drink on Sunday evening. We never discussed where I worked so we were both surprised when she came in on my Thursday night shift. Coincidently, she lived above the bar. That is some serious San Francisco shit right there. We went out once and decided it would be easier to just be friends considering she lived above the bar I worked at. [Good call — Ed.]

The Mission Hill Saloon is in an old building. I’m not sure of its age, but it’s old enough. One night, Raph, one of the regulars, told me — as I was closing the bar at 2am — that the place was seriously haunted and that he wouldn’t want to be in there all by himself at night. He gave me a wink as I ushered him out the door and locked it behind him. The asshole knew I had at least an hour of closing duties, by myself, in that old bar. I didn’t want him to know that his saying that shit really spooked me, and I put at least $5 in the jukebox so I wouldn’t hear any late night creepy old building sounds. Nothing ghostly ended up happening. Or if it did, I couldn’t hear it over the jams.

Unfortunately I only worked at Mission Hill Saloon for a little while. After Tony bought the bar he decided to work as many shifts on his own as he could, just to keep costs down. I completely understood, and I knew he’d be a great reference for whatever my next bar gig would be. Which is why I found myself filling out an application and using Tony the Pope as a previous employer. Tony may not be a religious man, but he sure does pour some strong-ass holy water. Plus, now it’s nice to be on the other side of the bar — so I can join the peanut gallery and give him shit.

P.S. This Weeknighter is dedicated to Ashley Dickinson who loves Mission Hill almost as much as I do.