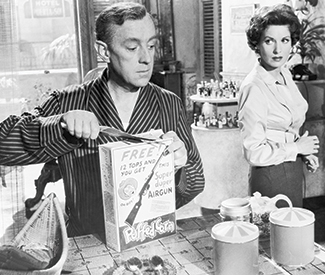 FILM In the 14 years since Sir Alec Guinness’ death, his fame has only grown, thanks to the enduring cult of the biggest hit of his long career — a film he famously dubbed “fairy-tale rubbish.” Star Wars (1977) made the stage-trained thespian a very rich man. It also meant that he was forever branded as Obi-Wan Kenobi in the minds of every moviegoer born in the post-lightsaber era.

Star Wars is notably absent from “Alex Guinness at 100,” a slate of digital restorations (and one archival print) screening at the Smith Rafael Film Center — just down the road from George Lucas’ Skywalker Ranch, as it happens. The series does include the actor’s two Best Picture-winning collaborations with director David Lean: 1962’s Lawrence of Arabia, in which a heavily eyeliner’d Guinness plays a supporting role; and 1957’s The Bridge on the River Kwai, for which he won Best Actor. These films are, obviously, glorious and best seen projected onto a theatrical screen, particularly when they’re being offered in sparkling 4K resolution. So if you haven’t seen either, this is a great opportunity. But the real attractions of “Alex Guinness at 100” are its lesser-seen selections, including several post-war comedy classics made at London’s venerable Ealing Studios.

The earliest among them (and the first film in the series, which begins Sun/17) is Robert Hamer’s Kind Hearts and Coronets (1949), made a year after Guinness’ turn as Fagin in Lean’s adaptation of Oliver Twist. Technically, he’s not the star of Hearts — that’d be Dennis Price as Louis Mazzini, whose deeply involved and darkly hilarious explanation of how he became a serial killer unfolds from his elegantly appointed prison cell, where he’s penning his memoirs the night before his execution. Born to a poor father and a mother disowned by her aristocratic family, Louis learns he’s eighth in line to be the next Duke of Chalfont. Spurred on by a number of factors (revenge for his mother’s treatment by her snooty family; his longing for a pretty childhood friend, played by the husky-voiced Joan Greenwood, who won’t take him seriously as suitor while he’s toiling as a sales clerk), he decides to start takin’ down the D’Ascoyne family, one branch of the tree at a time.

Hearts‘ most enchanting gag is that all of the D’Ascoynes are portrayed by Guinness, who dons wigs, facial hair, costumes, and even drag, but has such a way with characters that he barely requires the enhancements. Some of the heirs are more odious than others, and some of them conveniently pass away before their number comes up, but Louis’ victims all meet ghastly-yet-posh ends, like a plunging hot-air balloon (thanks to a carefully-aimed arrow) and an exploding jar of caviar. Throughout, the script is full of zingers (“My principles would not allow me to take a direct part in blood sports,” insists the bloodthirsty killer before a hunting excursion), an escalating parade of hats (worn by Greenwood’s conniving character), and the thrill of wondering in which guise Guinness will pop up next. In 2013, a Broadway musical based on the same source novel — Ron Horniman’s Israel Rank: The Autobiography of a Criminal, retitled A Gentleman’s Guide to Love and Murder for the stage — won a Tony for Best Musical.

Guinness moved to the forefront for Charles Crichton’s 1951 caper The Lavender Hill Mob, which netted him his first Oscar nomination (T.E.B. Clark’s script won for Original Screenplay). He’s bank worker Henry Holland, who oversees the delivery of gold bars from foundry to vault — and has been cultivating a persnickety, detail-obsessed persona for 20 years, biding his time until he can pull off the ultimate heist. Enter new lodging-house neighbor Alfred Pendlebury (Stanley Holloway), who’s in the souvenir-trinket trade (“I propagate British cultural depravity!”, he says proudly), and has access to a foundry of his own. The first-time crooks round out their gang with two career criminals, and the conspiracy creaks into motion only to hit a major snafu in the form of one wayward, solid gold miniature Eiffel Tower. Keep your peepers primed for a pre-fame Audrey Hepburn (bangs already on point), who pops up in an early scene.

Also in 1951, Guinness starred in Alexander Mackendrick’s satire The Man in the White Suit, about textile-factory genius Sidney Stratton, who gets his kicks tinkering with fabrics on a molecular level. (That he’s a mere loading-bay worker is only a slight inconvenience, since he still manages to con his way into the research lab.) With the help of his boss’ daughter (Greenwood again, here playing a woman turned on by nerdiness), the socially-awkward Sidney creates a seemingly indestructible cloth — terrifying both factory management and the labor union, which join forces to obliterate the invention that’ll render their jobs obsolete. Lots of goofiness in this one, including Sidney’s bleep-blooping chemistry setup, which wouldn’t be out of place in Willy Wonka’s HQ. More juicy cameos, this time for classic horror fans: Hammer Film Productions player Michael Gough plays Greenwood’s uptight beau, and Ernest “Dr. Pretorius” Thesinger shows up to wave a cane around as an anxious senior executive.

Guinness and Mackendrick teamed up again for 1955’s The Ladykillers, remade in 2004 by Tom Hanks and the Coen Brothers. The original — which features a young Peter Sellers, The Man in the White Suit‘s Cecil Parker, several rascally parrots, and Guinness in comically ill-fitting false teeth — remains the better version, with several Ealing Comedy motifs in play: boarding-house shenanigans, a heist gone wrong, one or more ludicrous chase scenes involving hapless cops. Ringleader Guinness, as “Professor” Marcus, assembles a group of ne’er-do-wells, who pretend to be a string quintet for the benefit of their kindly but meddlesome landlady, Mrs. Wilberforce (Katie Johnson). Her creaky home overlooks a train station, which is perfect positioning for the faux musicians’ robbery scheme. But, naturally, nothing unfolds as intended. “All good plans include a human element,” the Professor muses through his choppers. “But no really good plan would include Mrs. Wilberforce.”

The seventh film in the series, 1959’s Our Man in Havana, is neither Lean epic nor Ealing farce, but it has its own impressive pedigree: director Carol Reed (1949’s The Third Man), screenwriter Graham Greene (who adapted his own novel), an authentic pre-revolutionary Cuba setting, and a supporting cast of Noël Coward, Ralph Richardson, Maureen O’Hara, Burl Ives, and Ernie Kovacs. Guinness is brilliant as an expat whose desire to provide a better life for his materialistic teenage daughter (Jo Morrow) leads him to set aside the vacuum-cleaner biz and accept a gig as a British secret agent. Thing is, he’d rather just sip daiquiris than engage in espionage, so he fakes his way, with luck and imagination, into being “the best agent in the Western hemisphere.” With spy-jinks galore and a plot that veers from silly to suspenseful, Our Man is probably the gem of the series — and it’ll unspool in an archival 35mm print. As Lavender Hill Mob‘s Pendlebury would say, “Capital! Capital!” 2