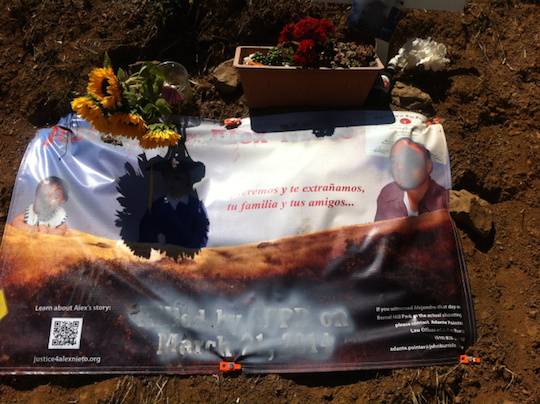 Alejandro Nieto was killed after a hotly debated, horrifying confrontation with the SFPD nearly five months ago. Since his death, his family and loved ones often gather at a memorial on Bernal Hill to remember Nieto. Now however, that memorial is allegedly being desecrated.

Just a week ago, a bystander caught the alleged vandal on video, following him after watching him throw pieces of the memorial down a hill.

Is this the man vandalizing Nieto’s memorial?

Before this man was captured on video, the vigil keepers had noticed that the vandal’s most recent MO was to wait until no one was looking, then grab something from the altar, and toss it across from the altar, downhill, off the path. (Before he had also been spray painting the banner.) Sometimes only one item was missing, sometimes everything was tossed. Clearly, he didn’t want to be seen carrying off an item, so he tossed them away out of sight, whenever and whatever he could when people were not watching.

Adriana came upon him around 1:30pm on Aug. 1, 2014, just as he was tossing a set of pebbles (used to weigh down the flower pot) off the side of the hill. She took out her phone and started walking towards him. As soon as he saw her, he started walking away, keeping his face off to the side (like a knowing pro.) She didn’t confront him, because she wanted to verify the missing memorial item. Once she verified the missing pebbles, and found the pebbles exactly underneath the spot he had been standing, she felt certain that this was the Memorial Vandal.

Even more problematic is the August vandalization wasn’t even the first time Nieto’s memorial had been spray painted, or otherwise disturbed. Apparently the site had been vandalized at least three times before. Banners have been spraypainted, flower pots thrown, and other items on his memorial were trampled.

Supervisor John Avalos, who worked closely with Nieto, told the Guardian this was “pathetic. It’s hard to ascribe any motive for vandalizing the shrine, but it certainly shows callous disregard for the community still grieving, and angry at the SFPD’s questionable killing of Alex Nieto.”

Much controversy has swirled around Nieto’s death. As the Guardian has reported, an initial examination of Nieto’s body suggests he died from wounds inflicted by at least 10 bullets, fired by multiple officers. Police initially encountered Nieto in Bernal Heights Park in response to a 911 call reporting a man with a gun. Nieto, who was employed full-time as a security guard, actually possessed a Taser and not a firearm.

Some say it was an understandable mishap by police, as SFPD Chief Greg Suhr has claimed the setting sun obscured officers’ vision of the taser, which they assumed to be a gun due to its laser sight. Nieto’s family and others strongly question that narrative, and filed a claim against the SFPD with attorney John Burris, the fate of which is still up in the air.

No matter which side of the debate about Nieto’s death you fall on though, we should all be able to agree that desecrating a memorial site of a dead young man is just plain wrong.