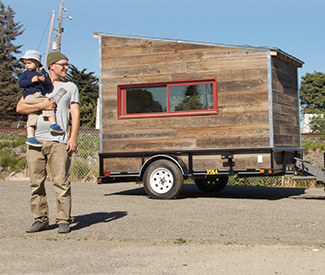 THEATER Once the image of the highway-bound pioneer, the camper van has been reborn on the plains of the Wild West of arts programming, just off 51st Street in Oakland. It’s been sighted here and there since May, greeted with honking and cheering by fans of the tiny house movement, idle curiosity by idling bystanders, and mild frustration by those anticipating a sidewalk taco or crème brûlée.

Something like the sloped cross-section of a survivalist’s shack, the trail-able cabin, with a pair of wide windows set in its redwood-plank sidewalls, looks modest enough if a little odd. But husband-and-wife artists and Range Studio founders David Szlasa and Katrina Rodabaugh see it as the beginning of a convoy, and endless possibilities.

The idea was born shortly after the couple’s son was born, about three years ago. Szlasa had just left his position as programming director at Z Space to pursue life as a stay-at-home artist and dad, and was quickly finding room to work at more of a premium than ever. Already a fan of the tiny house movement, he applied to the Center for Cultural Innovation for a material-support grant, with the idea of building a small studio in the parking space beside his house.

One of the needs he had hit on was a way of leveraging project-based support to artists for capital improvements that they could get further use out of.

“We as artists get in this pattern of raising money to do this show or do that show,” he explains. “This was re-thinking that and reapplying those funds to something that could give and keep giving. So with that I began to see the bigger opportunities in it, and pretty quickly realized this would be a prototype and model for a larger effort.”

Having built it over the course of about six months beginning last December — with crucial help from a few friends with specialized skills — Szlasa is now tooling around with his new mobile artist studio, hitched to the back of his old white pickup, in the hope of attracting support for the larger venture. Formalized as the Range Studio project, and co-directed with Rodabaugh, the former program director of artists resources at Intersection for the Arts, the idea is to replicate the prototype, christened Studio 1, and create a small fleet of deliverable art spaces and platforms that can be used individually, in tandem, or in remote coordination across a wide geographical area as a scalable artist residency program. Made of reclaimed and sustainable materials and entirely solar powered, the flatbed studio offers arts makers and programmers a real-world solution to the increasingly challenging problem of space in the Bay Area’s punishing real estate market, while embracing an ethic of conserving and maximizing material resources.

“And it’s all working!” says Szlasa, still a little surprised by the whole thing.

Studio 1 makes its formal debut this week as part of Yerba Buena Center for the Arts’ Bay Area Now 7 exhibition, which this year assumes an art fair format to showcase a wide range of practices and strategies among the Bay Area’s small to mid-size visual arts organizations. Parked outside YBCA’s downtown edifice, Studio 1 will house a series of micro residencies — with its guest artists on display to, and in various degrees of contact with, the general public. Artists-in-residence temporarily ensconced in the tech’d out trailer include Aaron Landsman (co-creator of last week’s City Council Meeting at Z Space); Dohee Lee; YBCA’s own Marc Bamuthi Joseph; and Keith Hennessy.

It promises to be almost as much of a spectacle as anything an artist inside might be working on. And Szlasa (who’ll be editing video there himself ahead of the Coup’s Shadowbox at YBCA on Aug. 16) readily admits, “It’ll be a hard day’s work to stay focused in there.” Still, with the amenities and accessibility Studio 1 offers, not to mention the spur to the imagination, it’s fair to assume its maker-residents will be happy campers. *