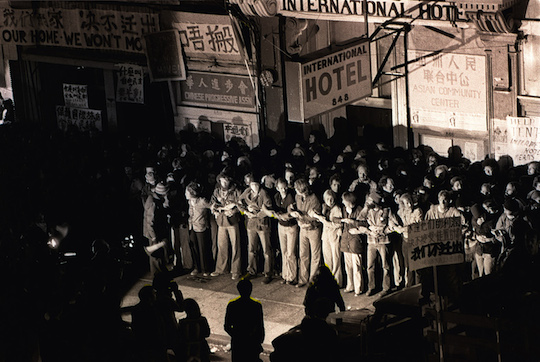 San Franciscans today may be tempted to feel we’re unique in our struggles with evictions and displacement, but one need not look far back to see rental struggles woven into our history. Yesterday the Manilatown Heritage Foundation celebrated the anniversary of the fall of the International Hotel, a mass eviction etched in the psyche of San Francisco.

The International Hotel, on Kearny street, was home to Filipino and some Chinese seniors, the last vestige of the Filipino community known as Manilatown. In 1968, the I-Hotel’s 196 tenants were served an eviction notice: the hotel was to come down, and a parking garage to come up. Much like today, the tenants fought back and resisted eviction, a years-long battle that lasted until August 4, 1977. After the sun went down, the police stormed the I-Hotel.

“That night was like electricity,” Peter Yamamoto told us, shortly after the anniversary’s celebration at the heritage foundation. Yamamoto was 23 when he was evicted along with the seniors of the I-Hotel. He stood in the third floor of the hallway, and watched the then-head of the local YMCA “get manhandled by cops,” he said. Outside, nearly 3,000 protesters linked arms to form a barricade, hoping to stop the police. In an era before Facebook events, Twitter, and cell phones, these protesters were called to action by a “phone tree” and simple word of mouth.

“We were out there to fight there for the old men,” Yamamoto said. “It was a simple thing.”

The fear of retatliation from police was real, he told us. “We stayed in the rooms with the old men to make sure they weren’t harmed,” he said. “The adrenaline level was incredible, but the old men were cool as ice. There were thousands of people outside ringing the block. The cops charged and charged.”

Even Mayor Ed Lee was on hand at the time. He was then an attorney at the Asian Law Caucus, and in his recent state-of-the-city speech he recalled the night everything ended.

“As Reverend Norman Fong, Gordon Chin, Jeff and Sandy Mori and so many others will remember, we stood together to stop the wrongful eviction of hundreds of our seniors and immigrants from the International Hotel,” he said. “One summer night, while the rest of the City slept, an army of riot police, many on horseback, marched on the I-Hotel. In defiance, some 3,000 of us banded together and surrounded the building, singing ‘We Shall Overcome.'”

The tenants were ousted. Yamamoto said some of the evicted seniors died shortly after, “of broken hearts.” The I-Hotel struggle lost, temporarily.

But that’s not the end of the story. Three decades later the Manila Heritage Foundation and 100 or so affordable housing units were constructed, and the I-Hotel was born anew. It owes its existence to Bill Sorro, a San Francisco native and activist in the Filipino community who fought against the closure of the I-Hotel, and then to later revive it. Sorro died in 2007, survived by his wife Giuliana Milanese and his six adult children.

After the anniversary celebration, Milanese recalled happier times at the I-Hotel.

“Let me tell you one story that brings joy to me,” she said. “We had a community kitchen and we had one guy from Albania and one guy from Italy cooking. All the Italians and the Filipinos held their nose because it was so bad from the smell of the food!” she recalled, laughing as she thought of the seniors that were her and Sroro’s chosen family.

The couple loved the place so much, they even married there. “We had two big cakes,” Milanese said, “one said Makibaka, ‘power of the people,’ and mine was Italian. I’m a lefty Italian!”

While speaking to the Guardian, Milanese was modest, but she is a political force in San Francisco in her own right. She’s on the board of directors of Coleman Advocates for Children and Youth, which just had a major victory in calling for the San Francisco Unified School District to curb suspensions, which they contest harms academic achievement. She also works with Jobs with Justice, who fought for the California Domestic Workers’ Bill of Rights.

A shrine to Sorro now stands at the Manila Heritage Foundation, which Milanese said brings her “tremendous joy.”

And much as Milanese fights for working class and vulnerable San Franciscans, the struggle for the tenants of the I-Hotel spawned many of the rental protections San Franciscans enjoy now, including rent control. But as Supervisor Eric Mar pointed out just after the anniversary, many of those tenant struggles still carry on.

Mar told the Guardian: “As we organize our communities to pass Proposition G – our Stop the Flip Anti-Speculator Tax – commemorations like the 37th Anniversary of the fall of the I-Hotel help us remember that we stand on the shoulders of those that came and struggled before us. The spirit of the manongs, of the I-Hotel and Supervisor Harvey Milk… guides us in our struggle against greed and the speculators who are threatening to destroy the characters of our communities.”

The uncle of San Francisco activist and poet Tony Robles, Al Robles, who has since died, penned a poem called The Wandering Manong, in the book Rappin’ with Ten Thousand Carabaos in the Dark:

I made it to Manilatown

the people here can name every fish back home

they sang songs all night

waiting so long for the International Hotel

I dreamt of a place to gather with them

surrounded with trees and rivers

who could have caused the manongs so much pain?

I remember the rains running down their faces

writing down all their stories.