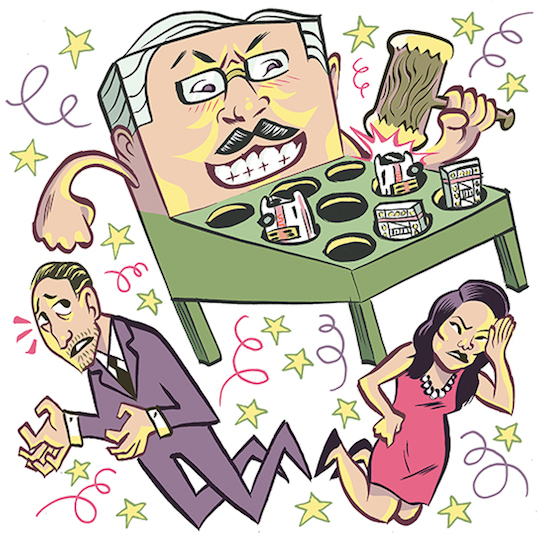 When he launched an unexpected mayoral bid in 2011, Mayor Ed Lee campaigned on a platform of changing the tone of San Francisco politics. The appointed mustachioed mayor claimed he put the civility back in City Hall, marking a sharp departure from the divisive tone of city politics as progressives battled former Mayor Willie Brown, followed by Mayor Gavin Newsom.

“We’ll continue the high level of civility in the tone we’ve set since January, and solve the problems with civil engagement,” he told Board of Supervisors President David Chiu, then his mayoral opponent, at a 2011 debate.

Yet over the past two weeks, Mayor Lee has started swinging hard against supervisors who have introduced measures that go against his own priorities. So much for civility at City Hall.

When asked about the outcome of her newly revised affordable housing measure, Sup. Jane Kim did not sound enthusiastic.

“It was definitely a compromise,” Kim said. But compromise is a word you use when you find a middle ground. By most accounts, Mayor Lee weakened the measure by hammering the right pressure points.

Kim crafted a novel solution to the city’s housing affordability crisis for the November ballot. Her initial Housing Balance Requirement would have established controls on market-rate housing construction, requiring a reevaluation whenever affordable housing production falls below 30 percent of total construction. The goal was to ensure that a certain amount of affordable housing would be built — but it was unpopular with housing developers.

Lee immediately drummed up a ballot measure in opposition to Kim’s, the Build Housing Now Initiative. The nonbinding policy statement asked the city to affirm his previously stated affordable housing goals. So what was the point?

It contained a poison pill which would have killed Kim’s Housing Balance Requirement. If Lee’s measure was approved, Kim’s would fail. The two politicians were in heated negotiations, trying to diffuse this ballot box arms race up to the very moment Kim’s measure went before the Board of Supervisors for approval at its July 29 meeting.

By the end of that process, Kim’s measure had been gutted.

Mirroring the mayor’s Build Housing Now Initiative, the new Housing Balance Requirement is a nonbinding policy statement asking the city to “affirm the City’s commitment” to support the production or rehabilitation of 30,000 housing units by 2020, with at least 33 percent of those permanently affordable to low or moderate income households.

Kim said she’d won funding pledges and promises for a number of affordable housing projects from the mayor. But Lee did not sign any agreement.

Essentially, the revised measure is a promise to promise, a plan to plan. Kim told us flatly, “We didn’t get the accountability we wanted.”

Everyone acknowledged the mayor was pissed.

Tenants and Owners Development Corporation, an affordable housing developer in SoMa, sat in on the negotiations. The city paid $170,961 in contracts to TODCO last year, according to the City Controller, and over $250,000 the year before. John Elberling, president of TODCO, and Peter Cohen, co-director of the Council of Community Housing Organizations, denied the mayor influenced them to ask Kim to revise her measure.

“I didn’t hear my phone ringing saying we’ll pull funding for affordable housers if you don’t do X, Y and Z,” Cohen told us. Yet he acknowledged the mayor “brought certain leverages to bear” in the closed-door negotiations to “compromise” on Kim’s ballot measure. Then everything changed.

“Yes,” Cohen said, “we then convinced the lead supervisor to change her position.”

Despite being labeled as a “compromise,” many observers read this as a sign that Lee had prevailed. Now the same hammer is coming down on Sup. Scott Wiener.

“I agree with the mayor on many things,” Wiener told us. But the mayor is targeting Wiener’s new Muni funding ballot measure, hoping to knock it off the ballot.

The mayor has a transportation bond on the ballot, asking voters to pony up $500 million to fund Muni. But Lee already blew a $33 million hole into Muni’s proposed budget when he decided to pull a Vehicle License Fee measure off the ballot. When that measure began to poll badly, he got cold feet, and withdrew it.

The San Francisco Municipal Transportation Agency’s budget outlined a doomsday scenario if the funding ballot measures failed to pass. It would be impossible to improve transit travel time, reliability, or to fund pedestrian and bike safety projects, the SFMTA staff noted in recent budget presentations.

Seeing the potential fallout due to the mayor pulling the VLF measure, Wiener placed his own measure on the ballot, tying expansion for Muni funding to the city’s growing population. If passed, Muni could see a $22 million bump just next year.

Openly, the mayor told reporters he would hold the supervisors who supported Wiener’s ballot measure “accountable.” Lee then initiated a conversation about slashing funding to city programs, signaling that supervisors’ favored projects could be jeopardized.

“Last week, the Board of Supervisors sent a measure to the ballot that the budget does not contemplate,” Kate Howard, the mayor’s budget director, wrote in a memo. She directed departments to cut their budgets by 1.5 percent, and asked for “contingency plans” including a “revisit” of hiring plans and scaling back existing programs and services.

Wiener issued a statement describing the move as “an empty scare tactic.”

“For whatever reason,” he wrote, “the Mayor’s Office felt the need to issue these emergency instructions now — a full year before the fiscal year at issue, in the middle of an election campaign, without even knowing whether the measure will pass.”

“The punchline is there were competing ballot measures, one from our side and one from Willie’s side,” Elberling told the Guardian. “There was an effort to reach a compromise, but that failed. I was in the meeting where he shot it down.”

“He said ‘I will make the decisions,’ quote unquote. ‘There is no compromise unless I say there’s a compromise.’ That was quite memorable,” Elberling recalled.

When things didn’t go his way, “Willie Brown took a housing project away from us,” Elberling said.

But Mayor Lee’s bluster and anger is new, and Elberling said it should be taken with a grain of salt. “Is it a bluff? That’s always a question. Real retaliation like Willie did, that’s a real thing. But huff and puff, that goes on all the time.”