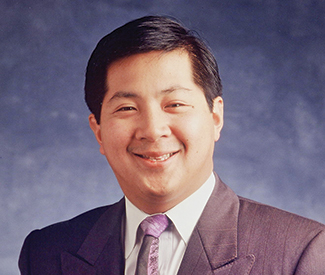 BART Director James Fang is San Francisco’s only elected official who is a registered Republican, yet over the last 24 years, he has somehow managed to easily win election after election in a city dominated by the Democratic Party, often with the endorsements of top Democrats.

But this year, Fang is facing a strong and well-funded challenge from investor and former solar company entrepreneur Nicholas Josefowitz, a Harvard graduate in his early 30s. Thanks in part to support from the tech community — Lyft cofounder Logan Green is one of several prominent figures in tech to host fundraisers for him, according to Re/Code — Josefowitz has managed to amass a campaign war chest of about $150,000.

After Josefowitz sold his solar company, RenGen, almost two years ago, “I got more and more involved in sustainable community advocacy,” he told us. “Then the BART strike happened and I was like, wow, this shouldn’t be happening.”

Josefowitz cited BART’s history of worker safety violations, last year’s unnecessarily divisive labor contract negotiations, the district’s massive deferred maintenance budget, property devoted to parking lots that could be put to better uses (he sees potential there for real-estate development), corrupt cronyism in its contracting, and lack of cooperation with other transit agencies as problems that urgently need correcting.

Fang is being challenged by well-funded Democratic newcomer Nicholas Josefowitz.

“BART does a terrible job at coordinating with other transit agencies,” Josefowitz told us, arguing the transit connections should be timed and seamless. “James has been there for 24 years, and if he was going to be the right guy to fix it, then he would have done it by now.”

We asked Fang why he’s a Republican. After saying it shouldn’t matter as far as the nonpartisan BART board race is concerned, he told us that when he was in college, he and his friends registered Republican so they could vote for John Anderson in the primary election.

“Some people feel the expedient thing for me to is switch parties,” Fang said, but “I think it’s a loyalty thing. If you keep changing … what kind of message does that send to people?”

Fang said he thought the focus ought to be on his track record, not his political affiliation. It shouldn’t matter “if it’s a black cat or a white cat, as long as it catches mice,” he said. He pointed to programs such as seismic upgrades, completing the BART to the airport project, and instituting a small-business preference for BART contractors as evidence of his strong track record. “I’m a native San Franciscan — I’ve gone through all the public schools,” Fang added. “It’s very important to get people from a San Francisco perspective and San Francisco values.”

Josefowitz supporters say he has perhaps the best shot ever at defeating Fang, largely because of his prodigious fundraising and aggressive outreach efforts on the campaign trail. “He is doing all the things that someone should do to win the race,” Radulovich, San Francisco’s other longtime elected representative on the BART board, told us. “There’s a lot of unhappiness with BART these days.”

But in an interesting political twist, Fang has the endorsement of Service Employees International Union Local 1021, a champion of many progressive causes in San Francisco, after he walked the picket line with striking BART employees last year and opposed the district’s decision to hire a high-priced, union-busting labor consultant.

“It’s a priority for us to elect Fang,” SEIU 1021 organizer Gabriel Haaland told us. “When we needed him on the strike, he walked our picket line.”

SEIU Political Chair Alysabeth Alexander sounded a similar note. “In the middle of one of the most important and highest-profile labor fights in the nation, when two workers had to die to prove that safety issues were the heart of the struggle, Fang was the only board member who took a position for safety,” she said. “Every other member shut out the workers and refused to acknowledge that serious safety issues put workers lives at risk every day. If more BART Board members has the courage of Fang, two workers would be alive today.”

BART got a series of public black eyes last year when its contract standoff with its employees resulted in two labor strikes that snarled traffic and angered the public. Then two BART employees were killed by a train operated by an unqualified manager being trained to deliver limited service to break the strike, a tragedy that highlighted longstanding safety deficiencies that the district had long fought with state regulators to avoid correcting. Finally, after that fatal accident helped force an end to the labor standoff, BART officials admitted making an administrative error in the contract that reopened the whole ugly incident.

“One of the things that really opened my eyes in this labor negotiation is that often we get told things by management, and we just assume them to be true,” Fang said, noting that he’d questioned the agency’s plan to run train service during last year’s strike.

Yet Josefowitz said the BART board should be held accountable for the agency’s shortcomings in dealing with its workers. “It starts with having a genuine concern over worker safety issues, and not just at bargaining time,” he said. “If the board had acted early enough, that strike was totally avoidable.”

Indeed, BART’s decisions that led to the tragedy have been heavily criticized by the National Transportation Safety Board, California Division of Occupational Safety and Health, and the California Assembly Committee on Labor and Employment.

Fang also has the support of many top Democrats, including Attorney General Kamala Harris, US Rep. Nancy Pelosi, and former state legislator and current Board of Equalization candidate Fiona Ma, who told us: “I have endorsed one Republican in my political history, and that is James Fang for BART Board.” Noting that Josefowitz “just moved here,” Ma said, “The BART system is one of our jewels, and I don’t think we should elect first-time newcomers in San Francisco to manage it.”

Radulovich said he was mystified by prominent San Francisco politicians’ support for Fang, saying, “In this solidly Democratic town, this elected Republican has the support of these big Democrats — it’s a mystery to me.”

One reason could be Fang’s willingness to use newspapers under his control to support politicians he favors, sometimes in less than ethical ways. Fang is the president of Asian Week and former owner of the San Francisco Examiner, where sources say he shielded from media scrutiny politicians who helped him gain control of the paper, including Willie Brown and Pelosi (see “The untouchables,” 4/30/03).

But political consultant Nicole Derse, who is working on the Josefowitz campaign, told us that she thinks support for Fang among top Democrats is softening this year, noting that US Sen. Dianne Feinstein and state Sen. Mark Leno haven’t endorsed Fang after doing so in previous races.

“[Fang] has longstanding relationships with folks, but Nick is challenging people in this race to stop supporting the Republican,” Derse told us. “It’s now up to the Democratic Party and it’ll be interesting to see what they do.”

She was referring to the San Francisco Democratic County Central Committee, which plans to vote on its endorsements on Aug. 13. While DCCC bylaws prevent the body from endorsing a Republican, Ma and other Fang allies have been lobbying for no endorsement in the race, which would deny Josefowitz a key avenue for getting his name and message out there.

“This is going to be one of the most expensive races in BART’s history. He will kill me on money,” Fang said of Josefowitz. He suggested that his opponent’s candidacy underscores tech’s growing influence in local politics, and urged voters to take a closer look. “People are saying oh, it’s all about Fang. What about this gentleman?” Fang asked. “Nobody’s questioning him at all.”

Derse, for her part, noted the importance of having a well-funded challenge in this nonpartisan race. “It allows him the resources to get his message out there,” she said of Josefowitz. “Most San Franciscans wouldn’t knowingly vote for a Republican.”