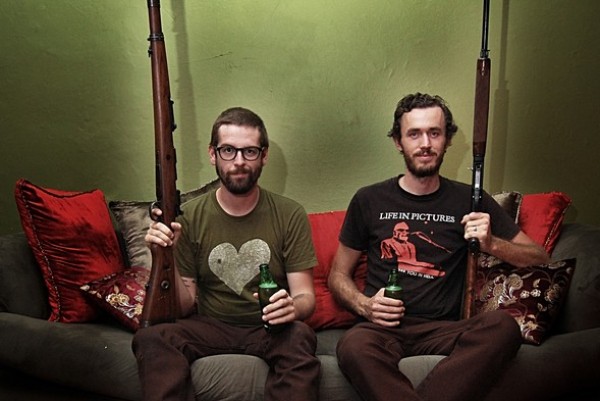 Andrew Jackson Jihad may be the most important punk band in America, but they sure don’t look like it. They’re cheerful and (relatively) clean-cut. They don’t want you to crowd-surf. They don’t move around a lot, and when they do they’re self-conscious about it. They don’t use any distortion beyond a pretty, almost psychedelic phaser. They’re technically proficient enough that they could probably back up Dolly Parton if they wanted to. Most importantly, they have to be mixed well, as anything that might distract from Sean Bonnette’s lyrics must be turned waaaay down.

Though their arrangements have become increasingly ornate over time, Andrew Jackson Jihad has always been an intensely lyrical band. A huge part of their appeal comes from the fact that just about any shitty situation anyone’s ever experienced, from stubbing your toe to watching your loved ones die all around you, can be soundtracked by one of their songs. This has allowed them to effortlessly transcend subcultures; not all might vibe with their aesthetic, but just about anyone can find something to appreciate in their lyrics.

At their show at Slim’s on Monday, July 28, I found myself next to two Death Grips-obsessed hipsters and then next to a gaggle of patch-adorned punks after the mosh had settled. After leaving the mosh, I spent some time next to a dude in a Streetlight Manifesto shirt. I ran into two friends there, one a punk and the other a staunch classic-rock fan who had no idea who he was seeing; the latter came out a convert.

I noticed the crowd seemed to react more strongly to lyrical than musical signifiers. I’ve never seen more people cry at a show, nor sing along of their own volition.  Furthermore, the unusually claustrophobic mosh seemed to tighten whenever Bonnette dropped a choice line, indicating that the audience’s fervor owed more to the lyrics than the music. AJJ’s music isn’t exactly custom-built for moshing, and I’ve seen far more energetic bluegrass bands that haven’t triggered anywhere near that reaction.

The amount of energy the crowd had accumulated by that point may also have had something to do with the opening bands. Hard Girls, the San Jose outfit that came on immediately before Andrew Jackson Jihad, were relentlessly and militaristically energetic; for much of the crowd, not moshing wasn’t an option. By that point, the moshers had tested the waters and were ready for the whole-room clusterfuck that occurred during AJJ’s set.

The first band on, the unfortunately named but phenomenally good twin-guitar ensemble Dogbreth, was the least intense band there. Yet their tamest songs were still wilder than a lot of the AJJ songs people moshed to. The crowd was relatively still during their set, leading me to believe Hard Girls’ main duty on the bill was to ramp up the crowd to breaking point.

Would the crowd have reacted as strongly to Andrew Jackson Jihad had Hard Girls not delivered such a hearty adrenaline shock to the crowd? Maybe the pit wouldn’t have been quite as oceanic as it was, but I’m sure there would still be plenty of shoving. Andrew Jackson Jihad’s music is about emotional release — both for the band and anyone who can associate with Bonnette’s almost uplifting pessimism. And as nobody goes to shows to have drunk life-talks with strangers, the next best thing one can do is just slam into them instead.