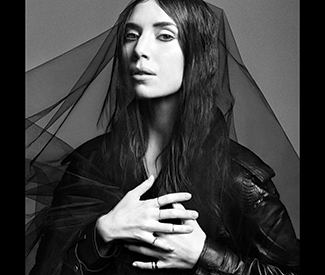 Lykke Li is a pop star who surrounds herself in clouds of reverb, so the obvious reference point for her music is Phil Spector’s ’60s girl-group productions. But strip away the layers of sound and her third album I Never Learn is essentially a set of adult-contemporary ballads that would slot nicely into any KOIT lineup. These songs are personal rather than universal, introverted rather than extroverted, subtle and slight rather than big and dumb — though there are some pretty shameless hooks on this album, readymade for festival sing-a-longs.

Li and her production team took a gamble on taking the brutally-short approach to this album; it’s only nine songs over 33 minutes, and music this fluid usually needs more room to splash around. But these songs are rich enough in content that each one feels like an event. “Just Like A Dream” and “Silver Line” have great choruses, while “Gunshot” and “Heart of Steel” feature neat production touches (slinky organ and twangy Morricone guitar, respectively). The album’s highlight is undoubtedly “Love Me Like I’m Not Made Of Stone,” a great acoustic ballad that could make it onto the charts with a bit more exposure.

Xiu Xiu has always been a bit silly. Though Jamie Stewart’s long-running project is often brutal in its emotional honesty, there’s no denying how over-the-top Stewart’s gasping vocals are, how absurd their lyrics can be are. Angel Guts: Red Classroom continues this trend, and it’s more theatrical than ever. And while this is the first Xiu Xiu album in about ten years that still might have the power to shock people, it also has more ill-advised moments than usual.

The main edge Angel Guts has musically over past Xiu Xiu albums is the change in Stewart’s voice. The vulnerability and hurt remains, but it’s overshadowed by a commanding deepness. The porn ode “Black Dick” wouldn’t be effective if he didn’t sing it with such power. But then we have him screeching “IT TASTES LIKE A COOKIE” for no reason, opening and closing the album with shameless noise, delivering monologues that scan as melodramatic even by Xiu Xiu standards. Though Angel Guts is flawed, it’s their most engaging listen in a decade, and it also features two of their best songs to date: the Michael Jackson-like “Stupid In The Dark” and “Adult Friends,” the most terrifying aging ballad I’ve ever heard.

There are 12 songs on this album, none of them are really about love, and if you put this on during an acid trip you’d probably be in ultimate entrapment by track four. Sam Ray’s ironic streak has always been pretty obvious — he’s got a folk project called Julia Brown (he’s not really a girl, haha) and previously performed under the name Teen Suicide. But as annoying as indie-rock irony can be, Ray can get away with it simply on the virtue of how sincere his music is. As on his wonderful Julia Brown debut To Be Close To You, Three Love Songs evokes the mundane but beautiful — empty rooms, road crews working late at night, light filtering through curtains.

As such, it’s a great all-purpose ambient album. Just about any situation could easily be soundtracked by a track on this album; while the first half of the record is a bit melancholy and might ruin your day in the wrong context, the second half is playful and almost goofy. There are better ambient albums for specific situations, but if I can’t think of the proper music pairing for a certain environment, I’d feel safe turning to Three Love Songs.