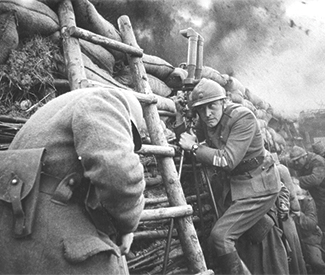 FILM “The First World War holds the distinction of being America’s most popular conflict while it lasted, and the most hated as soon as it was over,” writes Russell Merritt in the intro to his guest-curated Pacific Film Archive series “Over the Top and Into the Wire: WWI on Film.” Though World War I is a much less popular cinematic subject than WWII, or even the Vietnam War, its complexities mean that the films it did inspire continue to fascinate.

The PFA series kicks off Sat/2 with Charlie Chaplin’s Shoulder Arms (1918), in which the Little Tramp heads “over there” and becomes a most unlikely hero. Included in that same program are Disney short Great Guns (1927), and Winsor McCay’s The Sinking of the Lusitania (1918), a fiery argument in favor of America going to war, as well as one of the first animated documentaries.

I spoke with Merritt, an adjunct professor in UC Berkeley’s Film and Media Studies Department, just days before the 100-year anniversary of the war’s outbreak on July 28, 1914.

SF Bay Guardian How did you become interested in World War I films?

Russell Merritt For me, World War I is the event that shaped the 20th century, more than the Depression or World War II — and to see how films contributed is one of those endlessly interesting kinds of problems. They were mainly part of the war hysteria that gripped the country starting in 1917, and that in itself is of interest, because we were so opposed to the war just a few years before that, and we became even more opposed to the war after it was all over. The movies reflect that. Trying to account for these dramatic mood swings is part of the fascination.

SFBG How did you select the films in the series?

RM I tried to find both classics and some off-center ones. I suspect nobody who does a series on the First World War is going to forget All Quiet on the Western Front, Grand Illusion, or Paths of Glory, but few would think of Dovzhenko’s Arsenal or Gabriel Over the White House — though those enable us to get to some hidden aspects, or lesser-known aspects, of the ways in which the war was considered.

Of the war films that were made during the war, the only two that anybody remembers are a cartoon [The Sinking of the Lusitania] and a comedy featurette [Shoulder Arms]. Meanwhile, the most popular war film made during the war, D.W. Griffith’s Hearts of the World, with Lillian Gish, is all but forgotten.

SFBG World War I coincided with the early days of cinema. What bearing do you think the two had on each other?

RM In the case of Hearts of the World, it has a direct bearing. This production was unique in that Griffith is the only filmmaker — the only American filmmaker, the only fiction filmmaker — to be allowed onto battlefields, and onto the training grounds in England, to use the armies more or less as extras. It represents this great effort at trying to use motion picture fiction films as what would have been called “informational films” back then — today, we would call them war propaganda films. It reflects this fascination with movies as the latest medium with which to try to influence public opinion.

One of the most fascinating things about this film is Griffith is an American, world-famous for [1915’s] Birth of a Nation. He is invited by the British to make a feature film that will encourage Americans to join the war, or at least to be sympathetic to the Allied side of the war.

But by the time he arrived in Europe, the war had already come to America. So the project changed, and he created an American story about the war. I’m shortening a story that goes on even longer, but this kind of crazy wandering from one project to another reflects the difficulty of trying to find an image for the war other than making the Germans hideous, lustful barbarians. How do you portray the battles, the French, the Americans? That’s all being changed as he’s making the film, and he starts falling back on the patterns that he used when trying to sell the Civil War [in Nation].

All of this relates to your question, because today we have a quite pronounced way of selling government, or more frequently anti-government documentaries. Back then were the very beginnings of this effort to use film for these types of social purposes.

SFBG Hearts used real soldiers, and some of the films, like Grand Illusion, don’t depict any battles, but some of the special effects in the other films are surprisingly impressive. Disembodied hands gripping the barbed wire in All Quiet on the Western Front…

RM That is an unforgettable image, even all these years later. There was also a silent version made of that, with that same shot in it. In some ways, Paths of Glory is the most shocking of the films in the series, because it’s so angry. But the sheer horror of the war, I think, has never been better illustrated [than in All Quiet].

This leads to a subtext in this series: In some ways, you could regard this as a kind of cross-section of the kinds of films that represent the war. But I have a particular argument to make, which is that the films help perpetuate the illusion that the war that Americans fought was interchangeable with the war that Europeans fought. All Quiet is a great example of that. To this day, we think the Americans fought in trenches, that our cause was as confused and as hopeless to understand as was the European cause, and so on.

But in fact, we fought quite a different war. Our reasons for going into the war were quite different, and the experiences we had in the war were quite different. You can ask a class, as I do, “How many of you had relatives that were killed in the First World War?”, and just a sprinkling of hands will go up. Ask the same question in Europe, and it doesn’t matter if it’s France, England, or Germany — all the hands will go up. That gets blurred over in these films, and I’d like [audiences] to reconsider that.

The other thing I want to do is show how the war was used as the teens gave way to the 1920s, and into the 1930s. It had different functions, especially during the Depression, [when it was] interpreted so that it was appropriate to this great economic disaster. That’s the reason I’m including Gabriel Over the White House. And it has a much different purpose when it’s being incorporated into Soviet history; that’s why I’m showing the Ukranian film, Arsenal.

SFBG Perhaps it’s due to those complexities, but World War I hasn’t become a part of pop culture, for lack of a better phrase, the way World War II has.

RM I can’t think of a modern film about America’s involvement in the First World War. I suspect with the American centennial coming up in 2017, that will change. But even documentary filmmakers haven’t touched it. There was a 10-part British documentary series that was made 10 years ago, but we have nothing like that; Ken Burns isn’t going to do something on World War I. The strange part is, it may be as influential as any war we ever fought, certainly more than World War II, in shaping what kind of country we became.

SFBG Why did you only choose one film that was made after World War II? Is it because there just aren’t very many?

RM That’s one reason. And they’re not as interesting, since they more or less recycle the party line on World War I: it was terrible, it was unfair. There’s no new news coming out about the First World War after Kubrick’s movie, as far as I can tell.

SFBG Do you have a favorite among the movies you’re showing?

RM No, I love all my children [laughs]. When you see Grand Illusion, how can you not respond to Renoir’s humane view? This is the most generous view of the war, of officers, and of POWs, that you’ll ever see. It’s not exactly a comedy, but it’s this remarkable way of reconciling enemies, and officers and enlisted men.

Paths of Glory never gets old. It’s based on a historic event that took place in 1914, and kept on taking place; soldiers were frequently being executed for mutiny or cowardice when a military operation became a disaster.

I haven’t seen All Quiet on the Western Front in a long time, and yet for me it’s unforgettable. The big battle scene comes toward the beginning of the film, rather than where it usually comes at the end, and that makes all the difference. *

OVER THE TOP AND INTO THE WIRE: WWI ON FILM