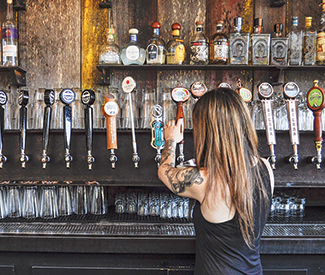 THE WEEKNIGHTER It opened a couple years ago at this point. Someone had said to me, “Hey man you been to Southern Pacific Brewing yet?” I hadn’t even heard of it, “What the fuck is a Southern Pacific Brewing?” I asked. A giant, 10,000-square-foot brewpub had just opened almost directly behind my regular bar, The Homestead, and, like, two blocks from my apartment — and I hadn’t even heard of it. Well maybe it’s because it’s not my apartment anymore, I thought to myself. I’d recently moved out of the neighborhood after breaking up with my long-term girlfriend and was sleeping on my cousin’s couch… for a few months.

You know, just some SF shit.

It seemed like my life, my neighborhood, and my city were all spiraling, not exactly out of control, but past mere comprehension. Besides the upheaval of my personal life, San Francisco was just beginning to swell with some kind of sickness, one that it had somehow survived a decade before. And my neighborhood, the Mission, seemed to be the place on San Francisco’s body where the sores of the Money Virus were showing the most. Restaurants were opening on Valencia faster than zippers at the (soon-to-be-closed) Lusty Lady, and little shops and bookstores that had been around for decades were getting tossed out with the trash.

But the thing that worried me the most was that I, Broke-Ass Stuart, the guy who likes to think he knows this city better than anyone, hadn’t even heard of Southern Pacific Brewing. “Have I lost a step?” I wondered. I knew I had to check it out.

All anyone had really said about Southern Pacific Brewing (620 Treat Ave, SF. www.southernpacificbrewing.com) was that it was HUGE! The ceiling is probably 2.5 stories high and the old warehouse space holds not just the bar-restaurant but also the entire brewing operation as well. I noticed all this when I walked in that first night, despite the fact that I was pretty trashed. I’d downed some booze at Dear Mom, banged a few back at Bender’s, hoovered some shots at the Homestead, and then sauntered into Southern Pacific. I was drowning in heartbreak and — that friend’s couch — numbing backache.

“It is huge,” I said to whichever of my no-goodnik friends I was with that night. We took in the environs. There was a sizable crowd, lots of good-looking people who probably would’ve been terrified to go that deep into the Mission a few years before. Thrillist or something like that had just blown the place up that day so all the Chads and Madisons from other parts of the city were there to explore a “hot new neighborhood spot,” I figured.

And then I looked around some more and saw plenty of Mission locals and natives whom I’d spent my twenties running around the neighborhood dive bars with. It was a good mix of everything the Mission was at the moment, for better and for worse. I liked the place immediately.

A bit later I ran into a girl I hadn’t seen in awhile and we talked about the city and its changes and about all the things that happen to you while you’re trying to grow up. And then it was last call and my friends were gone so the girl took me home with her. I hadn’t slept in a bed in a long time, so for at least that night my heartache and my backache were put to rest.