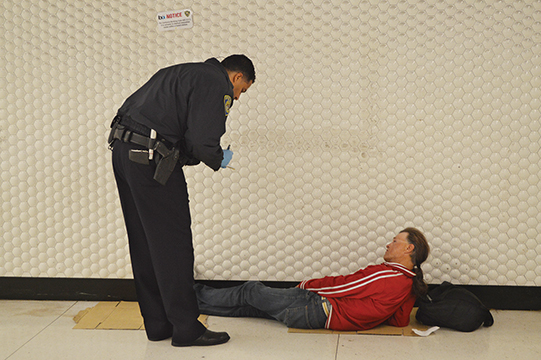 For most people, the Bay Area Rapid Transit system’s stations are just that: transitory. Walk into Powell Station, zip down the escalator and glide out on a train, destination somewhere. But for homeless people drawn to BART stations, the agency is a place to be stationary, a home and safe haven from the elements, muggings, and other hazards of sleeping on streets.

But now, BART intends to reclaim the T in its name. It wants the homeless to be transitory and get out of the stations.

Last week, the agency announced new enforcement of existing safety regulations that ensure people can evacuate a BART station in an emergency. BART argues homeless people sleeping or sitting in BART station hallways are in the way of a swift evacuation.

This legal interpretation gave BART carte blanche to scoop the homeless up and out. On the first day of the new rules, 17 homeless people were removed from Powell Station, which the agency justified to news media by repeatedly showing a video of a smokey accident that sent passengers fleeing.

“We had places where a big puff of smoke would fill the station very quickly,” Jeffrey Jennings, BART Police’s deputy chief, told the Guardian. “People were running not knowing what happened, very fearful. Other people were lying down, tripping folks. We could have had significant injuries occur because of that.”

First time offenders get a verbal warning, the second offense garners a citation, and the third offense jail time, all in the name of safety.

But the idea that homeless sleepers in all parts of a BART station may be trampled seems a little silly. Sure, there are sections of BART that are narrow and should be kept clear, but a walk through Powell Station shows 20-foot wide hallways throughout. This is where the homeless often sleep and sit.

At 8pm on a Wednesday, Powell Station is quiet and mostly empty, except for Charles T. He’s sitting in a chair right by the Powell Street entrance, strumming a guitar (skillfully), singing Otis Redding’s “Dock of the Bay.”

Some still sat in Powell Station that night, flouting the new ban. A woman in baggy clothes sat by the Fourth and Market streets stairwell, cuddling her very big, very droopy-faced Rottweiler. A bald man in soiled gray pants sat along the hallway to the next exit. Slightly past him lay a man with long black hair snoring next to the wall. And at the end of that hallway, two men stayed in each other’s orbit: a slender one in a red jacket and blue jeans slept with his dirt-caked hands folded over his stomach, while a portly man sat nearby on cardboard boxes, tapping his fingers to a silent tune.

The last man we saw sat with his feet pulled under his knees by the entrance to the Westfield Centre, studiously reading his Bible as he underlined passages from Revelations. The would-be scholar, Henry Terry, 59, greeted us with a smile.

Terry was born in Los Angeles, a child of Watts who was a kid during the violent 1965 riots when 34 people died, over 1,000 people were injured, and the neighborhood burned. Terry’s mother sent him to Alabama with his father.

After bouts with the bottle and drugs, Terry cleaned himself up and got a place to live at the Hotel Essex, part of the city’s Community Housing Partnership. But alcohol lured Terry back. While in rehab, he missed an important court date, and he was evicted.

Now he spends his nights holding his Bible sitting in a BART station, seeking guidance and shelter. “The only thing getting me back to functioning is reading God’s word,” he said.

Terry’s already been ousted due to BART’s new rules. But on this day, some of the officers were more lenient. “[The officer] told me to cross my legs the entire time I’m here,” he said, “so people walking don’t trip over you.”

They also asked him to leave the commuters be. “I don’t ask for food or money,” Terry said. He just wants shelter until he can appeal his eviction.

Counterintuitively, BART Police officers who already threw Terry out once are the reason he stays there. He said the streets are dangerous, and muggings by other homeless people are common. The gates to the station go down at 12:30am, and Terry sleeps next to them because he knows the BART police will keep the muggers away.

BART argues the new rule is about safety of the passengers. California Building Code 433.3.2.2 states, “There shall be sufficient means of exit to evacuate the station occupant load from the station platforms in four minutes or less.”

Though Terry was glad the officers left him alone to sit, the Guardian saw BART police apply the law to other homeless people: usually the ones mumbling to themselves, or, frankly, the dirtiest ones.

The two men in each other’s orbit were ousted. One tall and broad-shouldered officer woke the man sleeping in the red jacket.

“Excuse me sir, excuse me. Do you know about the new rules at BART?” he asked. After explaining the ban, he said “This is the first time, so I’ll give you a warning, the second time I will cite you. The third time, you go to jail.”

The officer recommended services they could call, together. He spoke kindly, even sweetly, but the result was the same as if he had been cruel: The man in the red jacket picked up his cardboard and went out into the streets.

We told Deputy Chief Jennings about the apparent selective enforcement, questioning the law had anything to do with safety. From our four hours of observation at Powell Station, it seemed to be applied only to the dirtiest or rowdiest people, or the ones specifically sleeping, we told him.

“Our policy is someone needs to be conscious, awake, and aware of their surroundings,” Jennings told us. “There’s no selective enforcement. We only have so many officers, so officers will be drawn more to someone who is not being quiet, or having a problem.”

He also told us they had never enforced the building code before because no one had ever thought to, until the idea occurred to a newly promoted sergeant.

To its credit, BART is making inroads to help the homeless. First, transit officials went to Bevan Dufty, the director of the Mayor’s Office on Homelessness.

“I was honest and said we don’t have on demand resources and our shelters are full,” Dufty told us. The Homeless Outreach Team is stretched to the limit. Dufty suggested BART hire its own help, which it did.

Its first full time Crisis Intervention Training Coordinator, Armando Sandoval, helps pair the homeless at BART stations with housing and other services. He targets his efforts on what BART calls its 40/40 list, which tracks the 40 homeless people that generate the most service calls to BART police. A BART press release said it placed 22 people with services within the last year.

“[Sandoval] hunts them down to see if he can work his magic with these folks,” Jennings said.

Supervisor Jane Kim is working with Dufty’s office to revamp BART’s new policy. “They clearly stretched safety concerns,” Kim told us. “It’s one thing to offer services, but another to force people out.”

BART’s Quality of Life service calls doubled from 2013 to 2014, according to a BART quarterly report, generated by complaints like public urination and disturbing the peace.

A BART police officer, who did not want to be named, told us he thinks BART has a hard choice: to let riders feel harassed and unsafe, or to oust people clearly in need of compassion. He said he saw the homeless population in the station swell with “the weather and the economy.”

He’s half right. Though being homeless and dirty may not be illegal, it may get you thrown out of a BART station.