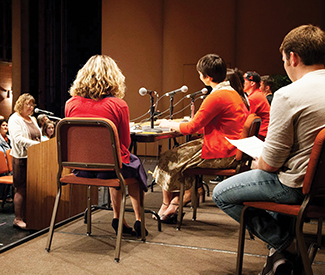 THEATER From a certain angle, democracy is just one big bout of audience participation. So when playwright Aaron Landsman, director Mallory Catlett, and designer Jim Findlay started kicking around the idea of somehow staging a city council meeting, of all things, the notion that the audience itself should enact it must have come as a eureka moment.

It is indeed the charm and challenge of City Council Meeting that, while conceived and instigated by the New York–based artistic trio, the show is ultimately a collaboration with whoever shows up, plus a few semi-rehearsed locals in on the running of the thing. These latter include a group of “staffers” who help guide participants through an actual city council meeting — or more precisely, a seamless composite of public transcripts of such meetings held around the US in the past couple of years, plus an artistic flourish or two. For the San Francisco premiere (running this weekend at local co-presenter Z Space), the staffers include Claudia Anderson, Awele, Dwayne Calizo, Jennifer Chien, Sarah Curran, and me.

Moreover, the piece always concludes with an original ending crafted specifically for the locale in which it plays (that, so far, has been Houston, Texas; Tempe, Ariz.; and New York City). This time, the play’s unique final movement, a creative response to what has preceded it, was built in partnership with Bay Area director-choreographer Erika Chong Shuch.

As a staffer, your job is to help facilitate the encounter between the play and its audience. Since that’s kind of what a critic does anyway, I reasoned, and given that everyone in the audience is already at least minimally involved in the production, I signed on for a more inside track on City Council Meeting‘s three-day San Francisco run. At the first rehearsal, director Catlett introduced us to our binders, which contained things we’d need, including something like the script of the performance.

(There is no definitive script. The play is an un-distillable architecture of discrete dialogue, directions on note cards, live and recorded video feeds, and whispered cues, not to mention the unforeseeable but pretty much guaranteed contingency. And perspectives and experiences will vary pretty widely depending on the physical and dramatic space one chooses to occupy: council member, speaker, bystander.)

It was a little confusing, frankly. But halfway through a swift two weeks of rehearsal, I’m seeing more clearly the shape of the show as well as appreciating the subtleties in its construction. Like much contemporary participatory performance, or what’s sometimes called “social practice” art, City Council Meeting moves the bulk of the action and agency onto its audience as a way to simultaneously investigate and manifest our social circumstances and potentialities. It is therefore purposely unsettled — participants are always themselves and yet tasked with enacting the words of other real people like, or more often not like, themselves.

The sheer awkwardness of it is really the point. Is this a study, a parody, an incitement, an invocation? In enacting the form, does the piece share in some of its power? A strange combination of sincerity and dry humor runs throughout it all, as the double-consciousness built into the piece throws everything gleefully up in the air, suspended somewhere between the rehearsal of dead forms (whether political or aesthetic) and the activation of new ones.

That’s a salubrious position, encouraged by the context at large. Or so I couldn’t help thinking. Was it merely coincidence that after leaving rehearsal one night I walked directly into road blocks, sirens, and hundreds of cops — the wake left by a president and secretary of state on political shopping sprees? Is the power that creates such disruption, traffic, and annoyance wherever it goes, like some heedless B-movie giant, even related to the power invested in local government? Was it just coincidence that after leaving another rehearsal a few days later, the Chronicle building was papered over in posters reading, “the media lies as Gaza dies,” this time the unsanctioned wake of a protest on behalf of the powerless?

For a moment there, Occupy took back government from representative bodies and held it in the bodies of real people, acting on their own behalf. It was wild, unexpected, and startlingly easy. It was also strikingly creative — and art was everywhere in the movement. It’s become clearer since then that the relationship between art and politics is a much more serious question than many of us had realized. We can’t afford a paucity of imagination in either. We need the room and wherewithal to ask questions. If nothing else, City Council Meeting asks questions. Including these:

“Are we working together? Are we capable of it? Is that why this structure is here? Or is that what the structure prevents?” *