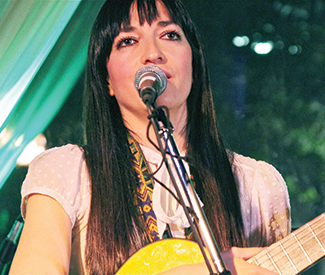 LEFT OF THE DIAL The way in which Diana Gameros first came to America is a world away from the heart-wrenching images we’re currently seeing in the news media of children who’ve been sent, on their own, to the U.S. border from Honduras, Guatemala, and El Salvador. At 13, she arrived on an airplane from her home city of Juarez, Mexico; the plan was to stay with an aunt who lived in Michigan for the summer. When Gameros visited her cousin’s school there, and saw that it had a swimming pool, among other luxurious-seeming facilities, her aunt asked if she wanted to go to that school and learn English. Gameros couldn’t say yes fast enough. She wound up staying three years, returning to Mexico for the second half of high school, and then moving back to the U.S. for college.

So no, no one ever sent her out on foot for the border, hoping that on the other side lay someone or something that could mean a brighter future.

And yet: “I’m kind of a fanatic when it comes to following this country’s immigration system and its history,” says Gameros, a fixture in San Francisco’s singer-songwriter scene for her thoughtful, melodic story-songs that contain both English and Spanish (she’s been referred to as the Latin Feist).

“I think there’s a lot that most American people don’t know. You hear people judging, calling these parents irresponsible…it’s so much more complicated than that,” she says. “People don’t know how the U.S.’s actions have affected these countries. People are risking their children’s lives because they need to be here. It’s not for the American dream, they’re not here to buy a nice car, a big house. They’re here because they want to eat, have a roof over their heads, fulfill basic necessities. It’s frustrating. There’s so much ignorance.”

Her unique perspective on border issues is one reason Gameros was selected to perform at MEX I AM: Live It to Believe It, a nearly weeklong festival organized by the Yerba Buena Center for the Arts in conjunction with SF’s Consulate General of Mexico. Bringing together musicians, actors, visual artists, and academics from throughout Mexico from July 31 through Aug. 5, the festival includes classical, indie, and pop music and dance, lectures and discussion of Mexico’s achievements and challenges, and a meeting of minds around border issues.

The program in which Gameros will perform, on the evening of Friday, Aug. 1, is called “Ideas: North and South of the Border,” and aims to explore innovation in the sciences, arts, and culture in Mexico. Among the other speakers: astronaut Jose Hernandez, who grew up in the Central Valley as the son of immigrant farmers; he’ll discuss his journey from childhood (he didn’t learn to read or speak in English until he was 12) through getting a degree in electrical engineering and eventually being tapped by NASA. Rosario Marin, the first Mexican-American woman to serve as Treasurer of the United States, will also be present, along with Favianna Rodriguez, a transnational visual artist whose work “depicts how women, migrants and outsiders are affected by global politics, economic inequality, patriarchy and interdependence” and the director of CultureStrike, an arts organization that works to organize artists, writers, and performers around migrant rights.

On the afternoon of Saturday, Aug. 2, actress-dancer Vicky Araico will perform her award-winning monologue Juana In a Million, which chronicles an undocumented immigrant’s quest to find home.

Gameros, whose 2013 album Eterno Retorno (Eternal Return) features a song called “SB 1070” (after the racist Arizona law designed to prosecute undocumented immigrants), says she thinks her music can be a subtle form of education, an artistic entry point for people who might not know or think much about immigration issues.

“It’s a topic that touches me deeply, so my protest music is my offering, my way to say I’m with you and I stand with you,” she says. “Though if you listen to my lyrics you might think many [songs] are love songs, or written to a lover who didn’t treat me right.”

Gameros adds that she hopes the Latino community in San Francisco will embrace the festival and show up, a sentiment that carries a particular weight as housing prices in areas like the Mission are changing the local face of the local Latino population. “Unless its the symphony doing something with a Mexican artist, we don’t really have access to events like this that are mainstream cultural celebrations, normally,” she says. “And there’s such a fascinating group of people all here for it — I just hope as many people as possible take advantage of it, that they come and hear these stories we have to tell.”

MEX I AM: LIVE IT TO BELIEVE IT

Most events at Yerba Buena Center for the Arts