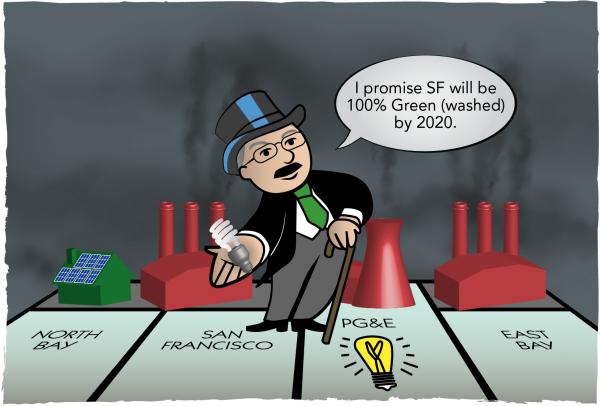 News outlets from Sacramento to Los Angeles are crowing about Pacific Gas & Electric Company’s alleged “cozy relationship” with the utlity that oversees it, the California Public Utilities Commission.

At least 41 emails obtained by the city of San Bruno reveal an intimate, friendly arrangement between the monopolistic power company and the regulators that are supposed to keep them in line. Where the public would expect a separation as hard and fast as church and state, the emails reveal a buddy-buddy relationship.

This is of no surprise to long-time Guardianistas, who may remember Rebecca Bowe’s cover story three years ago “The secret life of Michael Peevey, [5/11]” chronicling the CPUC president’s extravagant trips to Madrid, Spain and Germany with top energy officials, as well as other activities that may seem strange for an official who’s supposed to be a watchdog against PG&E malfeasance.

But if world-trekking trips to pricey hotels aren’t enough to raise eyebrows about the relationship between PG&E and its regulators, now we have suspicious emails to add to the pile.

In an April 2013 email, Carol Brown, chief of staff for Commissioner Peevey, wrote to PG&E executive [Laura] Doll and offered advice about how to handle one of the proceedings related to the San Bruno explosion. In the email, Brown said she had talked to one of the PUC administrative law judges about the matter.

“Send back a sweet note” to the PUC about the matter “and then wait for them to throw a fit” was part of Brown’s advice. Brown also said she was “happy to chat” about the matter with PG&E to help guide company officials through the PUC process.

Doll replied to Brown, “Love you. Thanks.”

Even Peevey himself emailed PG&E, offering them public relations advice. It’s like an umpire sneaking around between innings to coach a first-baseman — unseemly, and totally strange.

All of this should ring alarm bells in The City. The city of San Bruno obtained the emails through settlement of a lawsuit, which are now revealing potential corruption at top levels of the CPUC. But here in San Francisco, Mayor Ed Lee flouts public records laws and, as we revealed, drafted a policy allowing him to delete his own emails.

There’s no way we can check what Lee is saying to PG&E in emails, making exposing any alleged “cozy relationship” much more difficult than PG&E’s alleged romance with the CPUC.

And the consequences for The City are very real, as well as potentially fatal. As we’ve covered before, there are PG&E pipelines aplenty in San Francisco (including one right along Bernal Hill). When San Bruno’s pipeline exploded, eight lives were lost and many more homes destroyed.

As the San Francisco Chronicle reported last month (and as we’ve said for years), Lee already has suspiciously close ties with PG&E.

However, multiple city officials say that Lee’s administration has consistently, and quietly, raised objections about legislation and policies that PG&E opposes. They also point to the utility’s charitable giving to the city and some of Lee’s pet projects as an example of how PG&E tries to exert its influence.

Critics of Lee’s relationship with PG&E extend from the political left to at least five current and former high-level city officials. In some cases, several of the sources said, that relationship appeared to be inappropriate. PG&E officials regularly went to the mayor’s office when they were unhappy with city staff members, said the sources, who requested anonymity because of their relationship with the mayor.

“They were in his office all the time, meeting with either the mayor or his staff, and seemed to directly intervene in city decisions,” said one official. “It isn’t normal for most businesses in the city to always have meetings with the mayor.”

Lee, in several interviews, dismissed the idea that he was doing PG&E’s bidding as “a little off base.”

“I look at PG&E like any other company in the city,” Lee said. “I don’t think I have any special relationship with them.”

But in the case of the mayor, we may never know how close he is with the utility, as long as his off-kilter public record laws allow him to delete any paper trail. The CPUC is discovering what Lee long ago learned from former-Mayor Willie Brown: The “E” in e-mail stands for “evidence.”