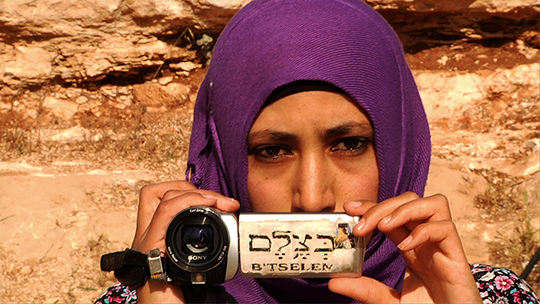 SFJFF The San Francisco Jewish Film Festival opens July 24 with The Green Prince, a documentary based on the memoir of Mosab Hassan Yousef. The son of a founding member of Hamas, he worked as an undercover agent for the Israeli secret service for 10 years, sharing a profound trust with his Shin Bet handler. The closing night film is also a documentary about a conflicted childhood that paves the way for tough choices later in life — but if Little White Lie is also a personal story, it’s a far less political one.

It’s a thoroughly American story, telling the tale of filmmaker Lacey Schwartz, who was raised by her parents — both products of “a long line of New York Jews” — in the decidedly homogeneous town of Woodstock. All of Schwartz’s grade-school friends had light skin and straight hair, while Schwartz was dark, with coarse curls. Lovingly recorded snapshots and home movies of her Bat Mitzvah and other occasions suggest a happy young life, but the “600-pound gorilla in the room,” as one relative puts it, was that Schwartz did not look white, despite ostensibly having white parents. Once she reached her teenage years — and particularly after she enrolled in a high school that had African American kids among its population — she began to realize the go-to family explanation (yeah … that one Sicilian way back in the family tree …) was nothing but a flimsy excuse holding back a mountain of denial.

Now in her 30s, Schwartz has overcome years of identity confusion and is self-confidently assertive in a manner that suggests years of therapy (and indeed, we see footage of sessions she filmed for a student project at Georgetown, where she found a supportive community among the Black Student Alliance). Her parents, however, are not quite as psychologically evolved, although her mother — a pleasant woman who has nonetheless been content to spend her life surfing the waves of passive-aggression — eventually opens up about the Schwartz family’s worst-kept secret. The aptly-titled Little White Lie clocks in at just over an hour, but it packs in a miniseries’ worth of emotional complexity and honesty. Schwartz will be on hand at the film’s San Francisco and Berkeley screenings — the Q&As are sure to be lively.

Another, rather different tale of women using cameras in pursuit of the truth surfaces in Judith Montell and Emmy Scharlatt’s In the Image, a doc about Palestinian women who work with Israeli human-rights NGO B’Tselem. Group members, who include high school girls and middle-aged mothers, are given small video cameras to keep an eye on protests, harassment, and anti-Palestinian violence perpetrated by Israeli soldiers and settlers. (In one disturbing clip, we see a small child launch a giant spitball at the lens.) Able to capture footage in areas deemed off-limits to mainstream journalists, In the Image shows how B’Tselem brings investigative reporting to the front lines, and then to the world (thanks, YouTube). It’s also an empowering outlet for the camerawomen-activists, for whom career opportunities are otherwise as rare as are opportunities for artistic expression.

Women are also front and center in a number of SFJFF’s stronger narrative entries. Writer-director Talya Lavie won Best Narrative Feature and the Nora Ephron Prize at Tribeca for Zero Motivation, a pitch-black comedy about female frenemies jammed into close quarters while doin’ time in the Israeli Defense Forces. Most movies prefer to show soldiers in combat, and Zero Motivation does just that — if “combat” means fighting to avoid boring admin work, to achieve the highest score at Minesweeper, to fuck up the most extravagantly, or with staple guns. “There’s a war going on — get a grip!” a superior officer reminds self-centered slacker Daffi (Nelly Tager), and that’s more or less the only current-affairs statement uttered in a film that’s mostly concerned with the agonizing task of achieving responsible young adulthood.

Another coming-of-age tale unfolds in Hanna’s Journey, director and co-writer Julia von Heinz’s drama about a Berlin business-school student (Karoline Schuch) whose résumé is lacking in the sort of warm-fuzzy community service that’ll elevate her in the cutthroat job market. Her estranged mother, who works with a German group placing volunteers in Israel, proves unexpectedly helpful, and Hanna is soon winging her way to work with developmentally disabled adults in Tel Aviv, leaving her sleek wardrobe and yuppie boyfriend behind.

Hanna’s Journey has all the potential to be a pat story about a German woman coming to terms not just with her own life choices, but with complicated family history (hint: it involves World War II) only a trip to Israel can unearth. There’s also a conveniently hunky Israeli (Doron Amit) in the mix. But! Schuch, who resembles Jessica Chastain, brings authenticity to a character who morphs from superficial to soulful in what might otherwise seem like too-rapid time. She also benefits from a subtle, nicely detailed script, which avoids stereotypes and oversimplification, and is not without moments of wicked humor (“German girls are easy — it’s the guilt complex!”)

Less successful at achieving subtelty is For a Woman, writer-director Diane Kurys’ latest autobiographical drama. Here, she explores her parents’ troubled marriage, inspired by a photograph of an uncle nobody in the family wanted to discuss. The fictionalized version begins as Kurys stand-in Anne (Sylvie Testud) and older sister Tania (Julie Ferrier) have just buried their mother, who was long-divorced from the girls’ ailing father.

For a Woman takes place mostly in flashbacks to post-war Lyon, where young Jewish couple Léna (Mélanie Thierry) and Michel (Benoit Magimel) settle and have Tania soon after. Russia-born Michel is a devoted Communist, and he’s overjoyed — yet understandably suspicious — when long-lost brother Jean (Nicolas Duvauchelle) suddenly appears in France, having somehow escaped the USSR. Michel’s political paranoia blinds him to the fact that Léna — who married him to escape a death camp (he didn’t know her, but couldn’t resist her icy blond beauty) — is bored with her stay-at-home-mom life, and has taken an unwholesome interest in his mysterious little bro.

There’s more to the story than that, of course, but For a Woman never goes much deeper than a made-for-TV melodrama: entertaining in the moment, but ultimately forgettable. And even gorgeous period details (Michel’s car is to die for) can’t make up for a frame story that feels rather wan next to the film’s cloak-and-dagger main plotline. 2