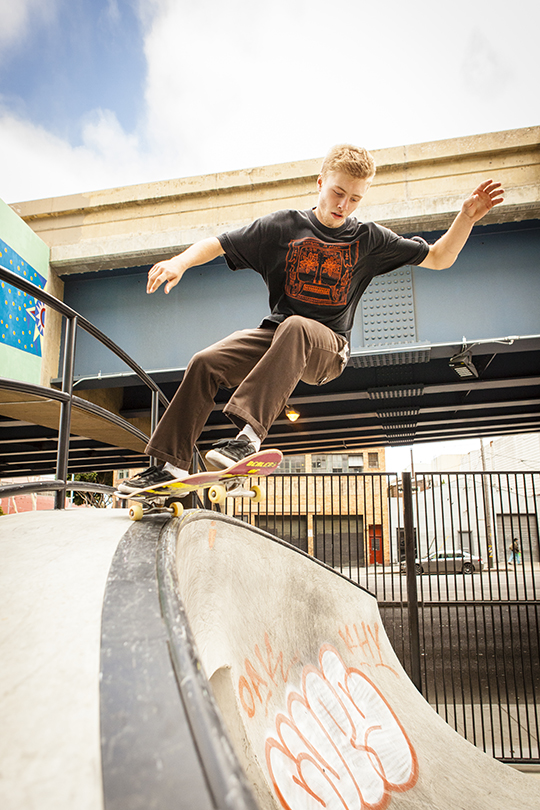 Chances are, you’ll find Jonathan Dean at the SoMa West skatepark. Dean, 23, is a San Francisco native who spends the majority of his free time at the newly opened skatepark located on Duboce Avenue between Valencia and Otis.

“I’ve been here every single day, except the first day the park opened,” Dean told the Guardian. “Everybody here loves this park. It feels like you’re skating on a street.”

The hum of overhead traffic on the freeway makes conversation difficult at times, though many of the skaters aren’t here to talk. Some stand off to the side smoking or drinking 40s in paper bags. But in the end, everyone comes to the park to skate. There’s constant activity, never a moment without someone flying into the air or grinding on a ledge, and the sound of skateboard wheels screeching on sharp turns regularly pierces the air.

The park itself is spacious, covering an entire block. Graffiti lines some of the walls and ramps, but the majority of the park has been left untouched, at least for now.

“I remember when I was 13, 14, dreaming about this park, and now it’s finally here,” said Flash Canet, 20, a San Francisco native. “I’ve been doing this since like the 7th, 8th grade, and it’s all I know, really. This is my life, this is my passion.”

The park cost more than $2.2 million, according to the Department of Public Works, which initiated the conceptual planning phase in March 2009. But already, problems are beginning to spring up, even though the park opened on July 1. For one, the graffiti that has started to line the walls and ramps is hazardous for the skaters.

“When you take krylon [a type of aerosol paint] and put it on glassy concrete, your wheels are not going to stick on it,” said Ryan Barlow, 22, a skater who moved to the area eight months ago. “It’s not even that the graffiti looks bad. It’s just really dangerous.”

Barlow says the graffiti issue will inevitably turn into a bigger problem, as is the case with many skate parks, but the skaters mostly seem to love the new park.

“It’s really easy to meet people here,” Canet said. “Skateboarding brings so many different kinds of people together to form a common bond, and that’s the beautiful thing about it. It’s like music, it just brings people together.”

All photos by Tim Daw Photography.