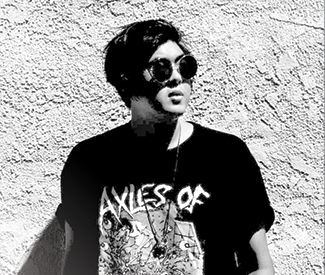 LEFT OF THE DIAL Yoodoo Park is the kind of musician who might make some people — people who didn’t find their calling until well into their 40s, or 50s, or 60s, aka lots of people — a little angry.

As GRMLN — a band name he chose when he realized the word “Gremlin” wasn’t Google search-friendly — the singer-guitarist’s new album, Soon Away (out Sept. 16 on Carpark records), is 10 tracks packed into 45 minutes of introspective yet confident, caffeine- and hormone-fueled energy, with nods to power pop and an eye toward the grittier side of the ’90s punk spectrum.

A follow-up to Park’s full-length, 2013’s far dreamier, poppier Empire, GRMLN’s sophomore effort (if you don’t count the self-produced EP he put out in 2011) still contains fairly simple songwriting, is still maybe a little overly concerned with being catchy — but on the whole, the album reads like evidence of maturation, of a songwriter stepping off the suburban curb and tentatively into the street; it’s the sound of someone picking up speed, realizing potential, realizing he’s just getting started. (He’ll debut songs from the record July 30 at the Rickshaw Stop.)

“You know, we were in the van driving back from Texas, and it was, like, barren,” says Park, who’s Korean-American, but grew up splitting time between Japan and Orange County, of how he spent the milestone birthday. “I would’ve stopped somewhere to get a couple drinks just because, but there was really nothing.”

If the new weight and levels of distortion on this album (recorded and mixed at a breakneck pace at SF’s Different Fur) speak to the familiar pains of growing up — “Go, go, go outside/be the one you want,” Park urges in the album’s first single, “Jaded,” over the peal of an electric guitar hook that lodged itself in my head the first time I heard it — Park, the person, seems far less angst-ridden. Either that, or he doesn’t believe in showing it.

Still, there’s a musical genealogy here that calls to mind Weezer’s most jagged, honest (best) stuff, a little Teenage Fanclub here and there, with a breezy understanding of pop-punk structure that he seems to have learned by osmosis (Orange County tap water?) and a tone that could maybe be described as “what you sound like when you grow up thinking of Social Distortion as senior citizens and then start a punk band. “

“I guess writing-wise I got way more darker and aggressive on this one,” he muses in the easy, sunny, pseudo-stoned drawl of which only kids who grow up in Southern California are truly capable. “This album is about how a lot of things don’t work out the way you want to, and how in life in general, getting attached to things really isn’t good, emotionally or materialistically. I’ve been reading about Krishna, and how the best thing you can do to make yourself a better person has to do with letting things go…so, yeah.”

What kind of things is he letting go of at the moment? Well, there’s school, for one. He just talked to his counselor from UC Santa Cruz, and it turns out he could graduate in one quarter but he’d have to take a lot of credits, which sounds like a lot on top of touring. So the plan right now is to move to SF and take the whole next year off for playing live, which is, he says, “way more fun” than any other aspect of being a musician (especially now that he and his friends can drink legally). It probably helps that his band is made up of his brother, Tae San Park, on bass, and a friend from high school, Keith Frerichs, on drums.

To be fair, he knows he has it good. “Part of what I wanted with this record was to send a message about how life really isn’t that bad,” says Park. “Life is great in California, but if you pay attention to what’s happening in the world, you watch any documentaries, see how people live other places&ldots;I’m really blessed. I think people take it for granted.”

With Everyone Is Dirty, Mall Walk (Different Fur showcase)

Just like the line for Bi-Rite ice cream on a day when the temperature climbs above 70 degrees, summer festival season seems to be getting longer all the time. This past week brought the announcement of two different festivals that promise solid lineups of local acts alongside serious grub, hopefully warm weather (as is usually the case when fall begins) and, of course, fine excuses for day drinking. The 20th Street Block Party, a free food and music festival brought to you by Noise Pop and the darlings of the SF culinary world (Thomas McNaughton and David White’s love-child of a restaurant group, made up of flour + water, Central Kitchen, Salumeria, and Trick Dog), will take over, yes, 20th Street in the Mission on August 23 for performances by Rogue Wave, Melted Toys (whose new release we highly recommend), Cayucas, The Bilinda Butchers, Myron & E, and more. Oh yeah, did we mention it’s all free? www.20thstreetblockparty.com

And on Oct. 14 – 15, the Culture Collide Fest, a long-running favorite in LA, will debut its first Bay Area event, with a thoroughly international lineup of bands from the US, Korea, the Netherlands, and Costa Rica: Cloud Nothings, Beat Connection, GRMLN, Go Back to the Zoo, Glen Check, Glass Towers, Alphabetics, KLP, and more. Participating venues include The Chapel and the Elbo Room; we’ll have more as the party gets closer. www.culturecollide.com