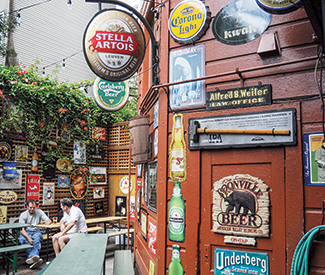 THE WEEKNIGHTER There’s a series of photos of me at Mad Dog in the Fog (530 Haight St, SF. 415-626-7279) where I am an absolute monster. I’m dressed in a wretched, beer-stained Santa suit, I have Mickey Mouse ears on, and there’s also some kind of sparkly garland thing adorning my head. In most of the pictures I’m flipping off the camera and making ridiculous faces that usually include an Elvis type lip curl. I look unhinged. I look subhuman. Goddamn, I look like I’m having fun. It was SantaCon 2011.

One of the few things I remember about our pit stop at the Mad Dog was gurgling, “I didn’t know they had a backyard here!” as we stumbled out into it. Apparently they do have one. I feel like I may have found out where the bar’s name came from as well, but that was lost, just like my sense of personhood that day. There is nothing noble about being Oscar the Grouch-level trashed. The only thing you get out of it is a bunch of photos where you look like somebody Shrek wouldn’t even fuck.

Luckily for us, Mad Dog is used to having stark, raving lunatics, in colorful garb, wasted there in the middle of the day. In fact the Lower Haight pub just had a full month of it. Mad Dog in the Fog has long been a staple for any soccer fan in San Francisco. Whether it’s the World Cup or The English Premier League or even a Las Chivas game, Mad Dog lives and breathes soccer. The doors open at 7am every Saturday and Sunday, so people can come watch their favorite team shoot goals and take flops.

I was lucky that day in 2011 that Mad Dog doesn’t serve hard alcohol. I was in a state of saying “hell yes” to pretty much everything, and who knows what would’ve happened. This lack of hard alcohol is also a blessing to serious beer drinkers: It allows Mad Dog to serve more than 150 different kinds of beer from around the world, some of which are rare and hard to get.

In fact, Mad Dog is so supportive of your beer problem that it even lets you pour your own. Yes, you read that right. A few years ago the proprietors installed a TableTender, a system of two taps that stick out of the middle of a table. You and your pals then pour all the beer you’d like from said taps and a display keeps track of how much you drink. Afterwards you settle your tab with the bar staff. I’m pretty sure they were hiding the TableTender from me and my friends that day. I would’ve if I were them.

I’d like to say that after behaving like a Garbage Pail Kid at Mad Dog in the Fog I went home and slept it off, but that would be a lie. Just like Rudolph the Red Nosed Reindeer, I was a tenacious bastard and led my party of holiday revelers to a number of other bars after that. I eventually lost them all, of course, and ended up at a house party… I think. Honestly nothing else I did later that night exists because nobody, to my knowledge, took any more photos.

But to this day, every time I walk by Mad Dog in the Fog, even when there’s a line of 50 people waiting to get in to watch a sports game, I mutter to myself, “I didn’t know they had a backyard here!” and smile thinking about that weird day back in 2011.