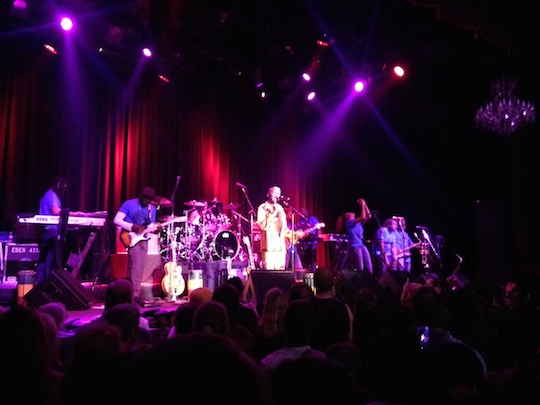 Jimmy Cliff is a goddamn maniac. It’s about 45 minutes into his 90-minute set at the Fillmore on Saturday night [July 19], and while the sheer volume of ganja smoke in the packed room is making real movement — beyond the standard shuffle/sidestep, white reggae fan head-bob, and occasional 30-second pogo accompanied by the triumphant fist-in-the-air move — seem an insurmountable challenge for most everyone on the dancefloor, 66-year-old Jimmy Cliff is onstage in matching bright yellow-and-red pants, a robe, and a hat, quite literally running circles around everyone.

His voice is strong and somehow heartbreakingly clear, whether on songs from his most recent album, 2012’s Tim Armstrong-produced Rebirth — like “Afghanistan,” an update on the classic “Vietnam,” or the upbeat, surprisingly modern-sounding “One More” — or on theclassics, which are almost too many to list: “The Harder They Come,” of course, “You Can Get It If You Really Want,” a chill-inducing “Many Rivers To Cross,” “Sitting In Limbo,” etc., etc., etc. —  Cliff stomped and shouted through the last 50 years, darting back and forth not only throughout, you know, linear time and political movements, but the evolution of reggae and Jamaican music itself, tracing the genre from from ska to rocksteady to dancehall. Forget your knowledge of or even affinity for these genres; the weight of the air feels different in the presence of an artist who’s been through, and influenced, so much of what you take for granted as musical history. And I’m pretty sure that wasn’t just the ganja.

Jimmy Cliff “One More” from dan sampson on Vimeo.

In between songs, he bantered (fan: “We love you Jimmy!” Jimmy: “I love you more!” Another fan two minutes later: “We still love you Jimmy!” Jimmy: “I love you double!”), gave history lessons (focused mostly on artists he claims responsibility for discovering: Sam Cooke, Bob Marley), led an audience-participation section for a new song he’s working on, and pretended the show was over and he wouldn’t be coming back on at least three times. And then he came back, three times. The encore fake-out was such that by the time the band walked off stage for real and the house music came over the speakers, the stoned, smiling masses didn’t believe it, chanting “one more,” for a good 10 minutes, until a stage hand who looked like she hated life at that moment walked on to unplug something; she was greeted with a collective groan.

It should be said here: I do not generally identify as a “reggae fan.” Having grown up in the Bay Area and having gone to Reggae on the River once when I was 10 (long story) and having attended a public California university full of dudes with board shorts and blacklight posters, I do not have fantastic associations with large throngs of mainly white people dancing to reggae music.

And yet: I found it difficult to dislike the bro-y, backward cap-sporting contingent at this show, which is a really weird feeling for me. They all just seemed too damn happy. Whatever Jimmy Cliff’s doing at age 66 to keep on doing what he did on Saturday, it’s keeping him healthy, and joyful, and it’s clearly catching. We should all be so lucky.