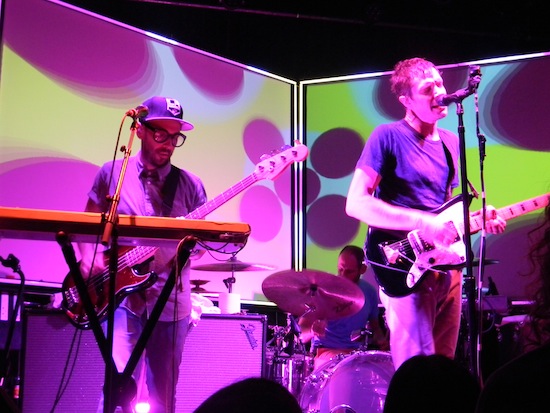 Ok Go’s catalog is the sonic equivalent of Fruit Loops. Bright, fun, tasty, and far from satisfying or substantive. They are also one of our generation’s greatest bands. Because what Ok Go lacks in musical imagination and originality, they make up for tenfold with the way they have revolutionized and thoroughly dominated the art of the music video.

Harnessing the power of internet culture and viral videos, Ok Go burst onto the music scene and the blogosphere in 2006 with their now-famous treadmill dance video for “Here it Goes Again.” Now, a century later in internet years, Ok Go continues to churn out pleasant power pop and a steady stream of mind-blowing film pieces (“music videos” almost seems condescending for these painstaking projects—while most bands go on set for six hours to two days, singer Damian Kulash pointed out, Ok Go works on theirs for six weeks to six months).

Somehow, the band has managed to continuously outdo itself with each new video, spending incredible amounts of time and energy on stunningly creative videos featuring stop-motion, Rube Goldberg machines, optical illusions, and the pure power of great choreography.

Perhaps fittingly, playing music seems to be a more of a side effect than a focus of Ok Go’s live show, which more prominently features bright video displays, interactive apps, and truly mind-blowing amounts of confetti (although, unfortunately, no dance routines). And, as with most technology-based things, a certain amount of troubleshooting was required.

However, despite a lot of technical difficulties, stalls, and spotty sound quality at their sold out Wednesday show at The Independent, the audience’s enthusiasm was not dampened in the slightest. A large part of Ok Go’s charm comes from their youthful excitement, curiosity, and energy, all aspects that translate beautifully to a live setting.

During glitches, while guitarist/keyboardist and “genuine, bona-fide nerd” Andy Ross worked on fixing technology failures, frontmen Damian Kulash and Tim Nordwind entertained the audience with Q&A sessions, and even (in what may have been the highlight of the show) a full run-through of Les Miserables’ “Confrontation,” with Kulash as Javert and Nordwind as Jean Valjean.

Ok Go are truly great performers. Their energy is high, their spectacles spectacular, and their banter playful and plentiful. I was taken aback, however, when Kulash casually called San Francisco a city “known for having a lot of faggots.” Even though Kulash is public about his support for gay rights and he followed this statement up with a lame “I say that with love in my heart,” it felt inappropriate and offensive. And all this was even before he called SF “Boston with Disneyland attached.”

But clearly not everyone in the audience took issue with Kulash’s faux pas, and there was an air of excitement and appreciation in the intimate venue from the first song to the last flurries of confetti. When the show had ended, leaving behind deep drifts of the colorful paper, fans didn’t want the fun to end. When I departed, half an hour after the show’s finish, people were still laughing, shrieking, and throwing confetti to the sky.