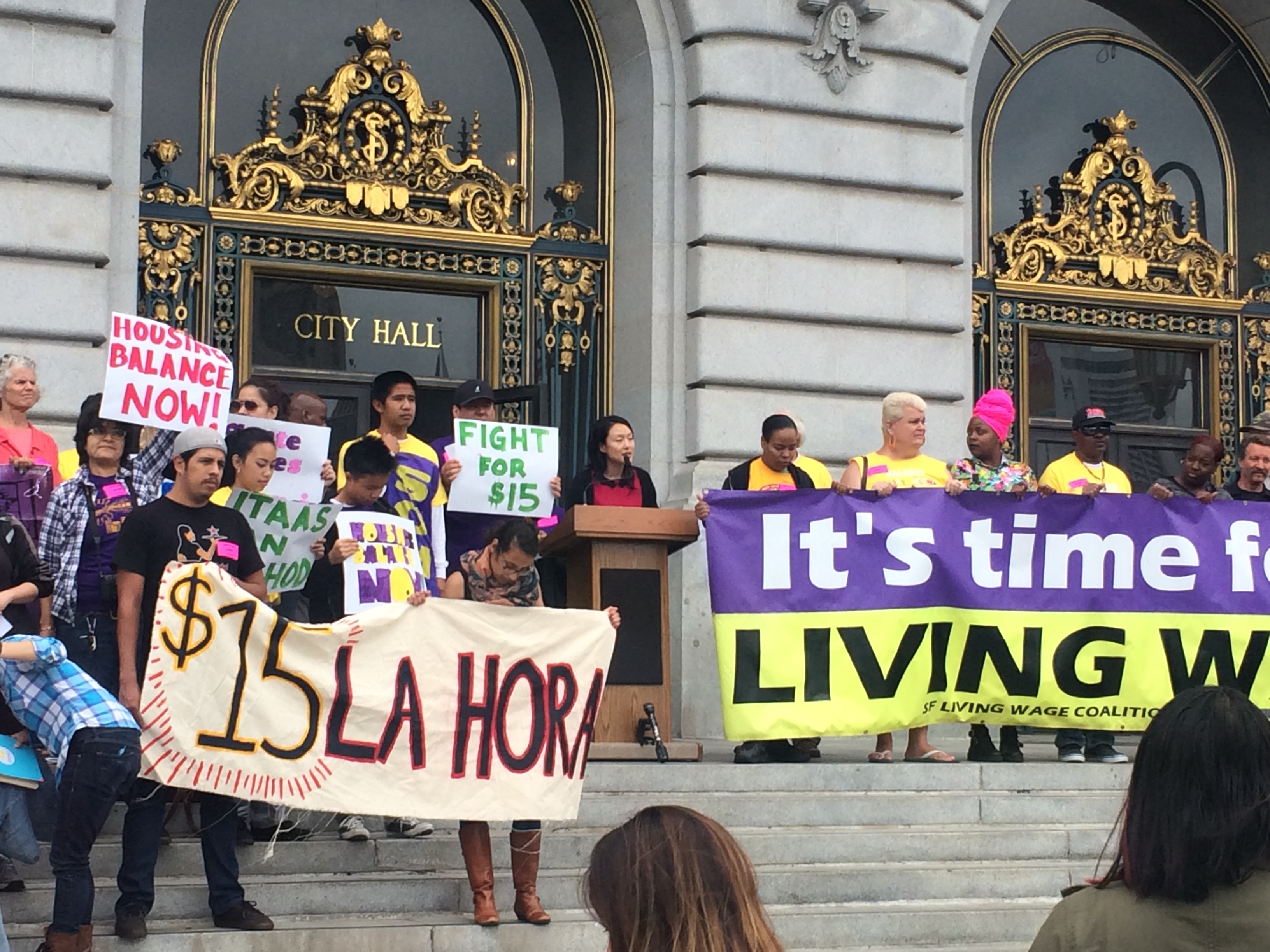 The November ballot is shaping into a housing supply theory showdown, and yesterday’s [Thu/17] Board of Supervisors Rules Committee hearing was the first round.

The mayor’s philosophy on housing, a strict supply and demand argument, was on full display.

The arguments are a little complicated, but let’s try to break them down: Kim’s initiative lays out a requirement for new construction to build 30 percent affordable housing and 70 percent market-rate housing. Currently, new construction projects can build on-site affordable or pay a fee into a pot, known as the Affordable Housing Trust Fund. If new construction needs to be exempt from the balance requirement, under Kim’s measure, that can be decided by the Planning Commission.

But the mayor and his deep-pocketed development allies are shrinking away from this like the Wicked Witch of the West from water. Affordable housing doesn’t make a dime for developers, and the mayor fears Kim’s policy will slam the breaks on market-rate housing construction.

Yet Kim’s measure is based on what many progressives in San Francisco believe: San Francisco’s housing market is hot, profits are high, demand is insatiable, and building lots of market rate housing that will never be affordable to most San Francisco won’t solve the city’s affordable housing crisis. The construction pipeline won’t slow down with a few dings to profit margins, she argued.

“I just have to say if building 30 percent affordable housing will halt development, we’re in a whole lot of trouble,” Kim said to her critics. “We have to build. Even people that make money leave San Francisco every day.”

No one is saying Kim doesn’t believe more housing needs to be built. But Lee’s staffers emphasized a belief that more housing construction alone is the solution to the city’s ills, a strategy that hasn’t exactly netted stellar results recently. They also defended the Affordable Housing Trust Fund, as the Mayor’s Office of Housing is funded about “40 percent” from developer’s fees, Olson Lee said. Sarah Dennis Phillips, from the Mayor’s Office of Economic and Workforce Development, argued sharply that any hit to developer’s fees, even marginal ones, would result in a loss of dollars for the city’s General Fund, the funding pot feeds most city services.

The mayor’s ballot initiative essentially asks for a vote of confidence in his plan to build or rehabilitate 30,000 housing units by 2020, which some in the press have pilloried as depending heavily on already-existing units. While 30,000 sounds like a lot, the Controller’s Office said San Francisco would need as many as 100,000 housing units to even make a dent in San Francisco’s skyrocketing housing prices, according to the SF Examiner (though he has since written the Examiner to say his sentiments were misconstrued). The city’s Civil Grand Jury recently released a scathing report of the mayor’s 30,000 housing unit goal, saying “While the residential real estate market is enjoying a strong recovery, it is doubtful the city can build its way out of the current affordability crisis.”

Meanwhile, people are losing their homes and fleeing the city. Some who are holding on by a thread came out to speak at the dueling hearings.

“I have health challenges including cerebral palsy,” Justin Bennet said during public comment. He spoke with a difficulty in his jaw, haltingly and with much effort. He said the housing market made it difficult to move from the dangerous areas of the city he calls home. “I’ve been robbed outside several residences I’ve lived in, so I’m hoping for a change in my housing situation in the future. Thanks for letting me speak.”

A family came up to the podium to speak, with two young housing activists, a brother and sister, 9 and 6, saying they didn’t want to see so many lose their homes.

Advocates from the SEIU 1021, South of Market Community Action Network, Alliance of Californians for Community Empowerment, and the Chinese Progressive Association, to name a few, were on hand at the hearing. They were also on hand for a press conference on the steps of City Hall shortly before the hearing. Ed Donaldson from ACCE called out the mayor’s housing measure, saying its only intent was to torpedo Kim’s.

“I say we should play chicken with the mayor,” Donaldson said at the podium. Metal bands have sung with less volume than the baritone he used while booming, “Let’s see if he has the gall.”

Inside the hearing, Patrick Valentino (who championed luxury development on the waterfront) and Tim Colen of the Housing Action Coalition spoke, defending the mayor’s measure.

“As San Francisco, as a city in affordability, we’re failing. Our rate of failure is accelerating,” he said flatly. He criticized Kim’s plan and asked, “Where’s the money? No one disagrees we need it. The shortcoming I see in the housing balance measure is its premise that if we increase restrictions on market rate housing, it helps subsidize housing.”

He argued instead to gather more stakeholders together (i.e. deep pocketed developers) to negotiate more private funding, a strategy he said that worked in the past.

As others came to the podium to argue against developer greed, Colen watched on, shaking his head, seemingly in disagreement. When someone in public comment argued that developers so far have shirked their responsibilities to build affordable housing, he shook his head again and left the hearing room.

There’s a stark divide in housing philosophy, and supply and demand’s ability to save San Francisco will soon see a trial by voter if Kim’s charter amendment can win six vote at the full Board of Supervisors.

The mayor’s policies seem to be more of the same, Kim said, and now the city seems to be fighting over the crumbs of developers’ fees. Despite opposition from the mayor, Kim told the Guardian she’s open to new ideas from the mayor.

But she also said she won’t back down.

“We’re on a two-fold path right now. If there’s a compromise to get [the city] to 30 percent affordable housing, like new revenue, we’re open to that compromise,” she said. “But we always intended this to go to the ballot.”