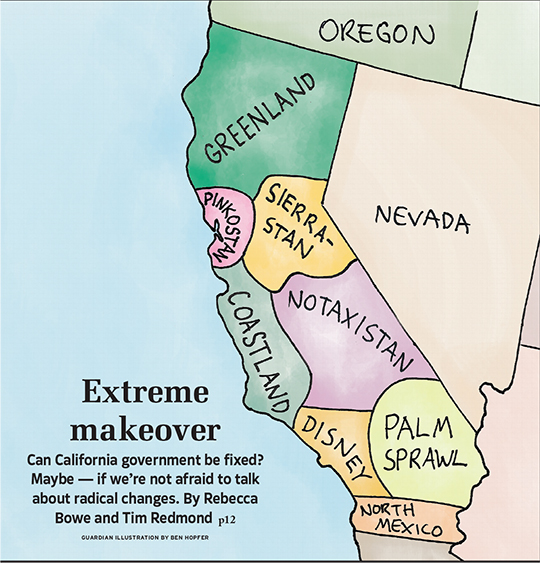 So another scheme — in a long and rich history of such schemes — is attempting to break California into more digestible parts, and gaining national attention. Venture capitalist Tim Draper’s Six Californias is all but on the ballot, attempting to rechristen the Bay Area as Silicon Valley. Good luck with that! (Although we have to say, it might create the first openly weed-driven state economy — Northern California — which would be fun to see.)

In 2009, we, too, put forth a proposal to split California up — building on an idea from conservative Central California, and echoed in Daily Kos. It was a doozy, but a logical one, with some actual Six Californias affinity.

The cover story itself grew from a Politics Blog post Tim Redmond had written in March of 2009, asking “Should California be split up?” — read the post below. As for creating states, we’ll be dreaming of Puerto Rico …

SHOULD CALIFORNIA BE SPLIT UP?

It’s an interesting question. Nothing new, really — folks up in the northern part of the state have been talking about secession since the 1940s.

But these days, the talk has shifted from North-South to Central Valley-Coast.

There’s plenty of discussion going on — the New York Times
reports on a move by farmers in Visalia, who say those of us in the more liberal western regions don’t understand what it’s like in the center of the state:

Frustrated by what they call uninformed urban voters dictating faulty farm policy, Mr. Rogers and the other members of the movement have proposed splitting off 13 counties on the state’s coast, leaving the remaining 45, mostly inland, counties as the “real” California.

The reason, they say, is that people in those coastal counties, which include San Francisco and Los Angeles, simply do not understand what life is like in areas where the sea breezes do not reach.
“They think fish are more important than people, that pigs are treated mean and chickens should run loose,” said Mr. Rogers, who said he hitched a ride in 1940 to Visalia from Oklahoma to escape the Dust Bowl, with his wife and baby son in tow. “City people just don’t know what it takes to get food on their table.”

A former Assembly member is pushing a vertical split, too :

“Citizens of our once Golden State are frustrated and desperately concerned about the imposition of burdensome regulations, taxation, fees, fees and more fees, and bureaucratic intrusion into our daily lives and businesses,” declares downsizeca.org, the movement’s website.

And all of this comes as reformers form both the left and the right are talking about a new Constitutional Convention.

Athough some of the proponents are clearly nutty, the idea isn’t. As the noted political economist Gar Alperovitz wrote two years ago

The United States is almost certainly too big to be a meaningful democracy. What does “participatory democracy” mean in a continent? Sooner or later, a profound, probably regional, decentralization of the federal system may be all but inevitable.

He was talking about California becoming its own nation, but I’d argue that the same problem applies here. The budget crisis, the gridlock in Sacramento … all of it suggests that maybe California itself is too big to govern. There’s also clear evidence of dramatic regional differences. If you take the Central Valley from about Redding on down, and wrap in Orange County, you have a red state within a blue state where most of the residents say they want lower taxes and smaller government. Along the coast from about Sonoma County down to the southern part of Los Angeles County, you have people who generally would like to see taxes pay for public services. If the coast were a state, we could repeal Prop. 13 and build world-class schools. We’d have same-sex marriage and single-payer health insurance. And we’d still be one of the biggest states in America.

Now, I’m not sure the people in the central valley quite realize the problem with their plans, which is illustrated in this wonderful chart that comes from the office of Assemblywoman Noreen Evans of Santa Rosa (PDF).

The chart shows that the people who dislike and distrust government and don’t want to pay taxes are in fact the beneficiaries of the tax dollars that the rest of us pay. In California, tax money from the coast winds up paying for services in the central valley.

But that’s okay — if they don’t want our money any more, maybe we should tell them we’re fine with that. Maybe we should split the state not just in two but into three: Let the northern counties become the state of Jefferson, where pot will be legal and the residents will be so wealthy from taxes and exports of that cash crop that they’ll make oil-richAlaskans seem like paupers. Pot will be legal in the coastal communities, too, and will generate tax revenue.

And in the central valley, they can have their low taxes and conservative values, and watch their roads, schools, and public services go to hell. Maybe eventually they’ll figure it out.

Of course, we’d have to figure out the water rights. The folks in Jefferson would have control over much of the water that now goes South, and there would have to be some long-term water contracts between the states, but that shouldn’t be an insurmountable roadblock.

And the solution would create its own problems; The GOP would control the central state, and would move to abolish the Agricultural Labor Relations Act and make life even more miserable for farmworkers. But then, maybe Jefferson would turn off the water and big agribusiness would be SOL anyway.

Meanwhile, Evans has introduced my favorite tax bill of the year, AB 1342, and it’s related to this entire discussion. She wants to allow counties to levy their own income taxes and vehicle license fees. “We went through this difficult process of trying to arrive at a budget,” her spokesperson, Anthony Matthews, told me. “For those communities that have a different view of government [than the Republicans], this bill would let them raise their own taxes to fund their priorities.”