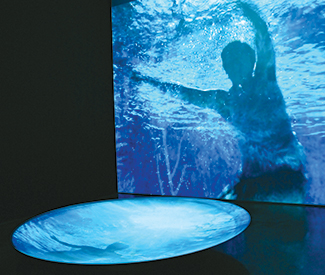 LEFT OF THE DIAL In a parable that opens one of the best-known speeches by the late great David Foster Wallace, two young fish are swimming along when an older fish passes them. “Morning boys,” says the (sentient, verbal) fish. “How’s the water?” And the two young fish swim on for a while, until one of them looks over at the other and says “What the hell is water?”

Living in the Bay Area, especially, water is a constant: Our travel routes often entail tunneling under or gliding over the Bay; white sheets of fog roll out in a damp coat over city daily, even in June; the Pacific, with its cold, gray version of the beach imagery most Midwesterners probably think of as “Californian,” provides our most obvious grounding point — I can’t un-learn directions based on the way I learned them growing up here. “Well, the ocean’s that way, so that’s west.” This was problematic when I lived in New York.

The ubiquity of water in our lives — and the corresponding ease with which we take it for granted, until, you know, we’re in a major drought that severely threatens California’s agricultural and therefore economic well-being — is part of what made H20 such a natural theme for this year’s Soundwave Biennial, a festival of music, science, visual and performance art thrown by the arts nonprofit Mediate every other year. Throughout July, August, and September, in museums and music venues throughout the Bay Area, on beaches, in bunkers and even aboard a boat or two, more than 100 different artists across all different media will explore water and its relationship to sound.

“We’re the city by the bay; water’s all around us, literally, but we don’t really talk about it, or what that means to us,” says Alan So, the festival’s executive and artistic director. “We’ll talk about drought or climate change, but it can be myopic — water makes up 70 percent of our world, and there are so many kinds of life we don’t get to see; there’s still so much that’s mysterious about it.”

After kicking off the evening of July 10 with a party at the California Academy of Sciences’ Nightlife featuring special interactive water life exhibits and live music from Rogue Wave (get it?) and Kasey Johansing, the festival continues with a somewhat overwhelming menu of happenings.

On July 19, SOMArts will host Pool, a video installation by Fernanda D’Agostino that plays off the idea of pairing memory with place, projecting watery images — a choreographer, Linda Johnson, submerged in water; salmon swimming upstream — via a two-channel generative video system.

July 26 will mark the opening night of Water World and no, that doesn’t mean you have to sit through any Kevin Costner dialogue. A multi-media exhibition that will take over SOMA’s Alter Space gallery through Aug. 30, Water World is a combination of sound and light installations, a collaboration between seven artists, designed to take the visitor through different sea levels that mirror humans’ levels of consciousness.

Viewers begin with “Ark and Surroundings,” a foggy seashore designed by Jeff Ray that features boats and bridges as interactive beings, including a 15-foot sailboat that’s been outfitted with a pipe organ. “Sirens,” by Reenie Charriere, aims to connect ocean pollution with the siren songs that nearly did in Odysseus, using sounds and fabric and barnacles and man-made tapestries, while “El Odor del Agua” explores the importance of access to clean water from the perspective of women living in rural Mexico. On Aug. 26, a musical performance called Flooded at Intersection for the Arts will see, among other artists, SF’s experimental musician Daniel Blomquist exploring the experiences of floods and flood victims, using video footage and audio from tapes that have literally been flooded — recordings that were discarded after being exposed to water.

Maybe most interesting, however, are this year’s site-specific installations. Those willing to bundle up for a trek out to Ocean Beach on July 27 will hear “music for a changing tide,” listening to an original composition by Seattle composer Nat Evans (attendees are encouraged to download the music ahead of time onto an iPod) whose ebbs and flows were designed specifically for watching the tide recede, with one group listening scheduled for twilight and one at sunset.

And on Aug. 3, a program that has Soundwave partnered with the National Parks Service will explore the potential water actually has to create music and art. Travis Johns’ hydroprinting instrument features an invented instrument that makes prints using a sonograph, measuring underwater sound reverberations in the battleship gun pool to create the water-equivalent of a seismograph line, while Jim Haynes — an artist whose bio often begins with “I rust things” — will delve into water as a chemical agent and sound conductor, making music out of amplifying processes like water turning to steam.

The festival will wrap up in late September with what So called “without being cheesy — a love letter to San Francisco,” featuring concerts (artists still TBA) on board an “audioboat” that takes participants around the Bay, with a cruise by the Bay Lights. Soundwave has done concerts on buses since about 2008, says So; this time it was only nature to make the jump to water. (This event is especially worth noting if other offerings like, say, Sept. 21’s Exploratorium performance that includes a meditation on the fear of water and/or drowning isn’t for you.)

“I’m always surprised by what comes back [from the open call for artists’ submissions],” says the director. “I think we don’t want to tell people what to do. There are some social, political pieces here, and some that aren’t at all. But if we can get people to appreciate water, what it means in terms of our daily lives — we drink it, we buy it, we swim in it — we can appreciate it for what it is, and not take it for granted. And we have researchers and city planners and scientists and artists of all kinds coming together for the closing symposium [at CCA Sept. 27-28]. I think the exciting part for a lot of people is ‘Where do we go from here?'”