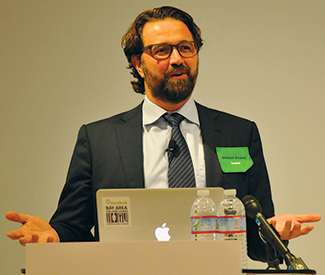 Although the mid-Market Street headquarters of Twitter was targeted with protests by the city’s largest employee union this spring, Zendesk was technically the first company to take advantage of what came to be known as the Twitter tax break.

Crafted by Mayor Ed Lee along with Sups. David Chiu and Jane Kim in 2011, that controversial policy lured the elite tech sector to the central core with the promise of payroll-tax exclusion — leading progressives to deride it as corporate welfare, served up to an industry already soaked in venture capital.

In the years since, the property values around mid-Market have swelled — ushering in the revitalization fervently desired by Lee and his political allies, but also putting the squeeze on long-term tenants who couldn’t keep pace with rising rents.

Some area nonprofits have been sent packing for the East Bay, while a group of relatively low-income tenants residing at nearby 1049 Market Street continue to float in a state of limbo, having been threatened with evictions that haven’t been carried out yet but also haven’t been rescinded.

When members of the media were invited to survey Zendesk’s sprawling new corporate headquarters July 9, spanning eight floors of newly renovated office space, I took the opportunity to witness firsthand the mid-Market facelift ushered in by the Twitter tax break.

What we found was a meticulously crafted corporate space populated by hip, well-intentioned employees, who seemed as if they inhabit an altogether different city — maybe a different world — than that of low-income residents living in the surrounding neighborhood.

“My, how things change so rapidly,” Mayor Lee said when he took the stage at Zendesk. “Two years ago, [Zendesk CEO Mikkel Svane] and I, and Sup. Kim, were celebrating the expansion from one floor to two floors. And just in literally two years, we’re celebrating a fantastic IPO.”

Zendesk’s May 15 IPO was hailed by investors as a sign that cloud computing stocks could perform well, raising just under $100 million on its first day of public trading.

Lee thanked Zendesk for its contributions to the community. The company had just announced its intention to open up its basement space for community programs and dinners for neighborhood groups, in partnership with area nonprofits and childcare providers. Under its community benefit agreement with the city, a required tradeoff for the tax break, the company commits volunteer service to activities like serving hot lunch to destitute clients at the St. Anthony’s Foundation.

“Already, being a major resident in mid-Market, I congratulate you on working so closely with our Office of Economic Development staff, our … nonprofits, our arts community,” the mayor said. “This building compliments so much of what I’ve envisioned for Market Street — to bring it back as a grandiose place. “

“The sense of being part of San Francisco reverberates with all your employees,” he added with an approving smile.

Zendesk, which sells customer-service software that’s widely used even if not well known outside the tech industry, has more than tripled in size in just a few years, expanding from 80 employees to more than 360 since 2011.

The grand opening bash was held on the basement level, equipped with a stage, amphitheater, and bar, with natural light filtering through the first floor. The mood was celebratory, with catering staff circulating through with trays of hors d’oeuvres and fresh-baked treats. Lee and Sup. Kim mixed with the crowd and delivered short speeches. Zendesk staff even presented Kim with a birthday cake, candles ablaze.

The unveiling of Zendesk’s crisp new headquarters was paired with the launch of a new initiative, the Mid-Market Business Association. With membership including Zendesk, Spotify, Zoosk, Benchmark Capital, WeWork, Silicon Valley Bank, and Koch Ventures, the newly formed group aims to spur even more business activity along Market Street between 5th and 10th streets.

It “came about organically,” explained Zendesk’s Tiffany Apczynski, who heads up the company’s corporate responsibility programs. “We’re all neighbors.” The Mid-Market Business Association “is mainly going to be focused on getting ground-floor retail space filled,” she added.

I asked Svane about working in the neighborhood. “The week we moved in, there was a murder,” right across the street from its first Mid-Market space, he said. “We did this thing, like if you’re working after dark, just take a cab — we’ll pay for it.” Three years later, “we’ve had no incidents,” Svane said, adding that he was glad to have Zendesk staff engage in community volunteer work. “It’s great to get people out there,” he said. “Like it’s really changed people — it makes them smarter, more well-rounded.”

Mid-Market used to be the type of neighborhood that middle-class white people might refer to as “gritty.” Years ago, then-Mayor Gavin Newsom bemoaned the stubborn blight of the area, vowing to do better, and Lee echoed that sentiment in the early days of his administration.

A few short years later, some long-term nonprofits and businesses have found it tough to adjust to the new market forces. And with venture-capital firms and tech companies flooding in, the contrast between rich and poor is jarring. In the area surrounding Zendesk’s gleaming new headquarters, it’s typical to see homeless people rummaging through shopping carts, or curled up in sleeping bags in storefront doorways.

Not far from Zendesk’s new headquarters, on Golden Gate Avenue, the Tenderloin Outpatient Clinic has found it must relocate due to a steep rent increase. Cindy Gyori, executive director of the clinic’s parent organization, Hyde Street Community Services, said she’s hoping to move the clinic to medical offices on Nob Hill but it has run into neighborhood resistance. The clinic, which has been in operation since 1975, serves about 1,200 clients per year. If the pending move doesn’t go as planned, then the clinic could be forced to shut its doors, Gyori said.

A city analysis from several years ago showed that a full 31 percent of the households in the densely populated Mid-Market neighborhood, mostly single-room occupancy hotels, earned less than $15,000 a year, making it three times as poor as the citywide average.

A Central Market Economic Strategy for revitalizing the area, published by the city’s Office of Economic and Workforce Development in November 2011, listed guiding principles voiced by community stakeholders at the time. Among them was: “Prevent displacement of existing residents and businesses.”

But in the face of market forces, revved up by the high interest in mid-Market created by the payroll tax exclusion zone, those guiding principles haven’t exactly panned out.

Last fall, a mass eviction facing long-term tenants at 1049 Market made headlines. Attorney Steve Collier, of the Tenderloin Housing Clinic, continues to represent some of those tenants. While the eviction notices they received have long since expired, they haven’t been kicked out, but they also haven’t been given assurance that they can stay.

“For some reason the landlord hasn’t been accepting rent,” Collier said. “The tenants know to save the rent money. But it’s always hard for people who are low income to save.”

Just before he left after touring Zendesk, we caught up with Mayor Lee to ask him a few questions, including whether he thought enough was being done to assist nonprofits being displaced from the area.

“We have a lot of focus on how to help nonprofits,” Lee responded, adding that he thought a solution was to “create even more public-private partnerships between nonprofits and tech,” and that “we need to bridge that more quickly.”

Zendesk’s new headquarters is a veritable fortress, housed in a 1909 building at 1019 Market that was once a department store. Renovations were completed in June, exposing historic wood beams and brick walls to complement the spacious workspaces, all featuring white and green hues for consistent corporate branding.

The building renovations cost $9.5 million, the same amount as the 2012 purchase price. When a reporter asked Jay Atkinson, a managing partner at building owner Cannae Partners about the sale price, Atkinson gave the number and then quipped, “Less than it’s worth today.”

Compared against the recently surging property values, that $19 million investment might now be considered small potatoes.

Just across the street, the recent flip of Zendesk’s other Mid-Market office space, at 989 Market, underscores the dramatic commercial property value increase in what the buyer termed the “rapidly-evolving Mid-Market district.”

ASB Real Estate nabbed the six-story building — which Zendesk shares with Zoosk, a social dating service — for $61.3 million. As the San Francisco Business Times reported, that’s more than double what the building sold for in 2011.

“Led by Twitter, Spotify, Yammer, and Intuit, new and expanding technology companies have made the Mid-Market District a location of choice,” ASB President Robert Bellinger said in a prepared statement, “leading to a market renaissance, from which our investors can take advantage.”

Back at 1019 Market, side office nooks and conference rooms were interspersed throughout the new space, with signs taped into the windows bearing enigmatic labels such as S’MORES, or FEATHER.

Ainsley Hill, a Zendesk staffer, led reporters on tours of the newly renovated space, describing how it had been configured “to our core brand values: airy, humble, valued, uncomplicated.” The aesthetic, Hill explained, might be described as “Danish Modern,” true to the company’s Scandinavian roots.

Danish Modern with a splash of California-style zen, you might say. The corporate logo is a cartoon Buddha wearing a telemarketers’ headpiece. Ergonomic workspaces are highly prioritized at Zendesk: That means adjustable desks, which can be lowered to the point where “you can actually sit on an exercise ball, and still be ergonomic,” Hill noted. Some choose to raise their desks and stand upon memory-foam pads (priced at $100 a pop) to support spinal health while working.

Svane, Zendesk’s genuinely approachable and gregarious CEO, could not express enough appreciation for the mayor. “Ed Lee has just been such a fantastic supporter,” he said. “I got his number, he got my number. He’s very hands-on with these things. Ultimately, we all have the same goal — to see mid-Market become a fantastic space.”

I asked Svane what he thought about the trend of displacement that had been affecting some long-term tenants in the area, particularly nonprofits. “As this neighborhood becomes more popular, it’s really hard to keep rents down,” he said. “There will be change. It’s hard to avoid.”