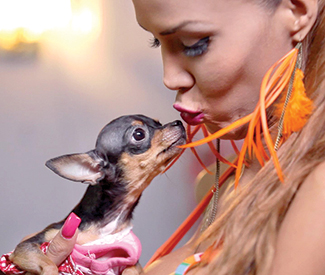 FILM As one of the Bay Area’s largest film festivals prepares for its opening (that’d be the San Francisco Jewish Film Festival, which runs July 24-Aug. 10), this weekend heralds several smaller fests with unique approaches to programming, including the San Francisco Frozen Film Festival at the Roxie, and Oakland’s outdoor Brainwash Drive-In/Bike-In/Walk-In Movie Festival. Also in Oakland: the second annual Matatu Film Festival, which takes its name from colorfully decorated mini-buses found in Kenya and other East African countries.

The reference suggests a focus on films from that region of the world. But while it is an international festival, it’s more interested in “matatu” as metaphor, presenting films as a way to transport the viewer to new places or points of view. Amid an overall strong program, one of the most timely entries is Mala Mala, a gritty yet joyful exploration of Puerto Rico’s trans community that makes great use of neon-lit streetscapes, a retro-synth score, and the oversized personalities of its subjects. Among them are drag queens, including recent RuPaul’s Drag Race contestant April Carrión, and transgender activists like Ivana Fred, who cuts a striking figure whether she’s raising awareness on TV talk shows, handing out condoms to sex workers, patiently enduring the opinions of a homophobic priest, or modeling her carefully sculpted assets (“I was born in Puerto Rico, but I was made in Ecuador,” she jokes).

The less-glamorous figures are also compelling, including prostitute Sandy, who’s refreshingly candid about all aspects of her life, and Paxx, the sole transman interviewed, who faces what he sees as a “harder transition than trans girls,” since his hormone therapy is far less accessible, and his social support system is far more limited. With trans issues in the spotlight more than ever — see: TV actress Laverne Cox’s Time magazine cover and Emmy nomination — Mala Mala directors Antonio Santini and Dan Sickles do an admirable job showing how diverse the community is, and how complex each individual’s struggles and triumphs can be. Speaking of triumphs, once the dance moves of future drag superstar Queen Bee Ho command the screen, it’s pretty clear who should star in the filmmakers’ next project — or at least season seven of Drag Race.

Elsewhere among Matatu’s docs is Evolution of a Criminal, Darius Clark Moore’s deeply personal film about his detour from standout Houston, Texas, high school student to bank robber, and from prisoner back to school — this time, at NYU’s esteemed film school. Criminal benefits from the sheen of executive producer Spike Lee, but Moore’s story would be gripping even with less polished production. He frames the film as a series of interviews with family members — mom, step dad, grandma, assorted aunts and uncles, etc. — and others (former teachers, the district attorney who prosecuted him) who reflect on the family history and financial circumstances that nudged Moore down the wrong path.

He was a bright kid from a close-knit, hardworking family that couldn’t seem to dig its way out of debt. One night, he was watching America’s Most Wanted and got the bright idea to plan a crime so flawless there’d be no way he’d get caught. He and his fellow teenage accomplices even had the perfect alibi: They’d show up at school, fake illness so they could slip out for the heist, do the deed, and then return to class several thousand dollars richer.

It did work — we watch the crime unfold in re-enactments far more tasteful than anything ever seen on America’s Most Wanted — until it went sideways, as recounted in interviews with Moore’s now-grown, now-regretful friends, and Moore himself, who brims with genuine emotion and yearns for closure, even going so far as to track down, and apologize to, bank workers and patrons who witnessed the robbery. After awhile, this feels like we’re witnessing a 12-step program in progress, but one of the men, a born-again pastor, is an effective mouthpiece for Criminal‘s themes of forgiveness. On the other hand, the DA is far more skeptical, wishing Moore well with his film career, but suggesting she won’t believe he’s really turned a corner until his prison stint is more than 10 years in the past.

Also among Matatu’s doc fare is Evaporating Borders, Iva Radivojevic’s poetic take on the current immigration crisis in Cyprus, an island ruled by both Turkey and Greece (with an “open wound” of a border between). “Its story is multi-layered and complex,” the filmmaker explains in voice-over. “It’s sordid and manipulated.” She has personal insight — she immigrated there herself during the war in her home country, the former Yugoslavia — but also offers of-the-moment perspective via firsthand accounts from recent arrivals. Many arrive fleeing war, as Radivojevic did, though now most come from Iraq, a situation that inflames the island’s considerable anti-Muslim bias. (The filmmaker interviews one Cypriot politician whose anti-immigration rhetoric sounds awfully Tea Party, a reminder that sweeping intolerance isn’t a uniquely American trait after all.)

Other Matatu docs include Virunga, about park rangers fighting to protect the dwindling population of mountain gorillas in Congo’s Virunga National Park; 12 O’Clock Boys, about a scrappy pack of young Baltimore dirt-bike riders (it had a Roxie run earlier this year, though here it’s paired with dreamy sci-fi short Afronauts as an added incentive); and Kehinde Wiley: An Economy of Grace, which follows the famed NYC-based painter as he shifts his focus from male to female subjects for the first time.

Clocking in at under 40 minutes, Kehinde Wiley is paired with a film of similar running time, if not subject matter: Unogumbe, a refashioning of the Benjamin Britten opera Noye’s Fludde. Set in South Africa, sung in Xhosa, and orchestrated with African instruments, it also recasts the Noah character as a woman (the wonderful Paulina Malefane) who gets a heads-up from the guy upstairs that she needs to gather her family and build an ark, pronto. The other two narrative films in the festival are Of Good Report, a contemporary film noir that also hails from South Africa, and the African folklore-inspired Oya: Rise of the Orisha.

But the best companion piece for Unogumbe is Matatu’s opening-night film, The Great Flood, which pairs archival footage shot during and after the devastating 1927 Mississippi River flood (curated by filmmaker-multimedia artist Bill Morrison) with a jazzy, bluesy score (by guitarist-composer Bill Frisell). It’s a memorable, haunting collection of images: slow pans across small towns with just rooftops visible; residents paddling whatever few belongings they’ve salvaged to higher ground; a makeshift tent city for the displaced, with an open-air piano providing much-needed entertainment; and starched politicians, including future POTUS Herbert Hoover, surveying the damage while skirting the mud as much as possible. *

Most screenings at Flight Deck