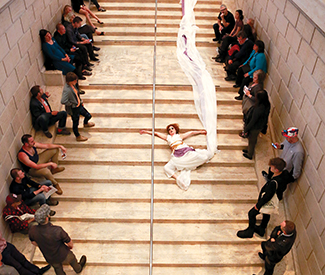 THEATER If you were milling around the Asian Art Museum last Thursday evening, you might have seen a woman tumble — ever so slowly — down the Beaux-Arts building’s elegant flight of central stairs. Ringed by a crowd of onlookers and the second floor’s imposing colonnade, her limber form caressed the marble steps luxuriously as she cascaded beneath the elegant arched ceiling, entirely at her own pace, leaving behind her the unraveling, impossibly long train of her white and lavender gown.

Bystanders ruminated silently or chatted quietly, sipping cocktails, for the duration of Fauxnique’s 20-minute high-art pratfall, Beautility, as house music reverberated from DJ Hoku Mama Swamp’s station in the nearby lobby. Passing through the lobby, you would have seen mercurial artist Dia Dear offering free makeovers, while members of TopCoat Nail Art Studio applied lacquer to willing hands, in designs inspired by pieces in the museum’s current show, Gorgeous, built from the permanent collections of both the Asian Art Museum and the San Francisco Museum of Modern Art.

Having at last landed on the first floor, in front of the shiny red and white speed demon parked there — German designer Hartmut Esslinger’s Prototype for Frog 750 motorcycle (1985), from the SFMOMA collection — Fauxnique (aka Monique Jenkinson) gathered up her enormous train and rushed up the stairs and out of sight.

Back in the lobby, you might also have caught sight of Nude Laughing, a peripatetic work by La Chica Boom (Xandra Ibarra), and followed the nude figure as she went by, dragging behind her a large nylon stocking filled with what appears to be hair and plastic breasts. You’d have ended up in an alcove on the first floor between several incongruent sculptures — including British artist Tracey Emin’s hot pink neon phrase-sculpture, Fantastic to Feel Beautiful Again (1997); a voluptuous, powerful, and headless stone torso of a female deity from southern India (1400–1600); and American Dan Flavin’s horizontal row of fluorescent colored beams, untitled (in honor of Leo at the 50th anniversary of his gallery) (1987).

In the company of these disparate pieces, the performer slips inside the giant nylon pouch — a Marilyn Monroe wig over her dark hair and atop her painted face, fake furs and sundry toy boobs pressed against her brown body — as she stretches the sheer fabric enveloping her, writhing in coquettish spasms, emitting artificial squeals of pleasure. A puissant abstraction, seriously unsettling and completely mesmerizing in her vaguely menacing flirtation with her audience, the figure eventually sheds her gauzy cocoon and, with a confident stride, disappears down a hallway, leaving behind some flotsam of costume pearls, wigs, and fur.

With enormous projections of full moons looming over a small stage, John, Mike, and Mary engaged in welcoming speeches, banter among themselves, victory laps with streamers, occasional howling, extended ferocious lip-synched roaring, and worshipful mouthing of one truly insipid Oscar acceptance speech. Sound rose and fell, a cacophony of noise gave way to mumbled quips, focus blurred and shifted, bodies went slack, writhed on the dance floor, or bounded around the room. At one point, Mike’s address from the podium slipped from a kind of self-actualization seminar into an outright stab at mass hypnosis as he charged us all to “be Nicole!”

Nicole Kidman, their vessel, “both everything and nothing,” was not quite an object and not quite a projection. Like the other performances enlivening the spaces of the museum and the strange harmony of the artworks on display, Fuck Gorgeous was deeply ambivalent but committed to being in-between, both a come-on and a refusal. *