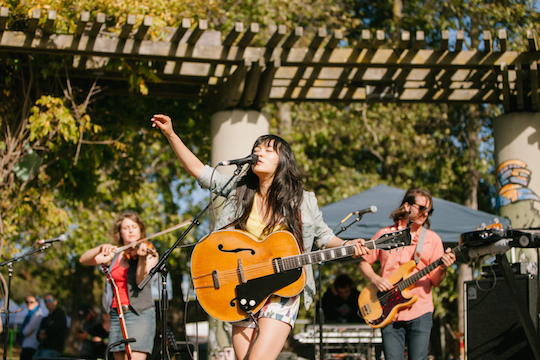 So, what did you get up to on Saturday?

From an abundance of flamingo decorations to the sight of skateboarders with a penchant for performing dangerous acrobatics off stage barricades, July 12’s Phono del Sol — the hometown pride-filled music festival thrown with a new level of fervor each year by the Bay Bridged at Potrero del Sol Park — showcased a variety of genres and kept the musical midsummer blues at bay.

Best dark horse: Yalls
Hands down, sickest set of the day — literally. Berkeley-based musician Dan Casey battled a bout of bronchitis but delivered a powerful performance, taking the microphone as if there were no tomorrow for his bronchial tubes. Admittedly, I was a little wary of his set before it began. I first saw him perform as an opener for chillwave superstars Small Black back in March. Yalls reigns as king in venues such as the Rickshaw Stop, where the smoky stage and club lighting complement his beats well. However, he successfully conquered the unfamiliar territory of a sunny, outdoor stage in the middle of the day. I was impressed (his doctor probably isn’t) — not even his slightly nasally vocals could detract from his songs.

Best ’90s throwback: Tony Molina
Tony Molina’s biggest strength can easily backfire on him and become his biggest weakness. Making the perfect mixtape for a friend is tough — even tougher when you had to work with an actual cassette tape without the help of iTunes’ drag-and-drop features. It’s important to include a varied selection of songs that also flow into each other. Local musician Molina only halfheartedly hit the mark on Saturday. While he found the delicate balance between grunge and pop in each song, he seemed like he’d simply forgotten to spice his set up a bit. He’s known for exceedingly short songs (none of the tracks on his latest album exceed two minutes) that all flowed into each other a little too well during his afternoon set. Oftentimes, it was difficult to figure out when a song would end and when a new one would begin, which wasn’t a problem when I listened to his 2013 EP Dissed and Dismissed.

Best dressed: Blackbird Blackbird
Blackbird Blackbird’s Mikey Maramag has come a long way since he opened for Starfucker in 2013, when I overheard someone in the audience murmur “It’s a wall?” after he asked us to sing along to his song “It’s a War.” Although security cut his set off, Blackbird Blackbird was a notable highlight due to his impeccable sartorial splendor, persistence in trying to connect with the audience, and ethereal vocals. Effortlessly clad in a Hawaiian shirt, he alternated between requesting that “everyone get fucking closer” and enveloping the crowd with dreamy vocals that occasionally battled for dominance over the synth.

Best German thing (Das beste deutsche Ding): Das Bus
Two disappointments: the World Cup final took place the day after Phono del Sol and Sportfreunde Stiller’s unofficial World Cup anthem from years past is far too trite to appreciate unironically. Otherwise, the German national football team could’ve claimed this title as well. Das Bus is the Bay Area’s mobile Volkswagen photo booth. In this modern age, we’re both obsessed with photos of ourselves and anything vintage, so Das Bus is simply a rad match made in heaven. A chalkboard outside the van even proclaimed that the experience was pet-friendly, so the family dachshund can jump in with you.

Best audience participation: Nick Waterhouse
Watching this set from a distance while enjoying the food trucks’ offerings, my friend and I marveled at the wall of audience members who swung their bodies along to Nick Waterhouse’s soulful, old-timey tunes. We were impressed by how the number of participants grew steadily throughout the set and the demographics of the dancers. Coachella gets a bad rap these days because some of its most notorious attendees are rich college kids in hipster headdresses. But because Phono del Sol takes place in a small, neighborhood park, it caters more to music aficionados of all ages — ones who don’t pretend to recognize “bands … so obscure that they do not exist” à la Jimmy Kimmel Live. The toddler swaying to Nick Waterhouse’s “This Is a Game” in his mother’s arms and the multitude of well-behaved dogs should remind us that we’re damn lucky to have an annual festival like this just a mere Muni or BART ride away from our neighborhoods.

Best snippets of stage banter: Bill Baird
As the first act of the day, Bill Baird’s sense of humor was appropriately low key and easy to miss if you trickled into the park late. “We’re Bill Baird,” he announced, in a deadpan voice, before a spiel about the presence of deodorant as one of his stage decorations and how heavily he himself relies on deodorant. (Practical, yes, but I never knew deodorant could be trendy.) Introducing the second lo-fi song, “Your Dark Sunglasses Won’t Make You Lou Reed,” he confessed that the song was originally about talking shit about himself, but the meaning evolved over time; the track now talks shit about one of his bandmates. He may not confess this (if he did, I missed it because I wandered away early to catch the Tiny Telephone tour) but he could very well be talking shit about a pretentious festival-goer…

Best hidden gem: Tiny Telephone tour and Marvin the studio cat
Musical magic happens in a small, unassuming corner tucked away behind the park the other 364 days of the year. I couldn’t tell if the Tiny Telephone recording studio tour was poorly advertised or capped at a certain number of people, but it was worth sacrificing the opportunity to see a couple of artists. We explored the studio with owner John Vanderslice, who must be one of the most genuine professionals involved in the music business. His enthusiasm was infectious — he spoke about the difficulties behind monetizing art, the aesthetics of reclaimed wood, and his preference for analog recording (as opposed to something computerized, which is commonplace today).

We even met Marvin the studio cat, who snoozed on top of the console in studio A’s control room. (Adorable, but not affectionate.) I quickly forgot about the studio’s proximity to 280; it felt like I was walking around a cozy cabin in the woods. Still, the studio was weird enough to justify its location in the city — studio B used to be the home of a weed-selling auto shop before it went out of business amidst the rise of dispensaries.

Best all-around: Thao & the Get Down Stay Down
Hometown heroes Thao & the Get Down Stay Down kickstarted their headlining set with Thao Nguyen’s sincere welcome: “Hello, my hometown.” From the 50-minute-long set alone, I could tell that she’s one of the most talented and down-to-earth modern indie musicians, from her expertise on at least three instruments (not including her impromptu takeover of the drums and her beatboxing prowess) to her introduction of John Vanderslice, “a.k.a. the nicest man in indie rock — it’s a fact.” (The band recorded its last album at Tiny Telephone.) Thao’s energy and stage presence was intoxicating; it was evident how much all the band members love what they’re doing when they lost themselves in the music. The set easily transcended genres even within the first two songs of the set, with a folkier emphasis on the violin on “Know Better Learn Faster” and a louder, rock sound on “City.”

“There’s a lot to be proud of living in San Francisco and I hope we remember that,” Thao remarked in between songs. As the crowd slowly dispersed after the band’s encore, I ruminated on her words as I watched her lead a little boy from backstage over to the drums, where she grabbed two pairs of drumsticks: one for her and one for him. She taught by example; whenever he successfully imitated whatever she had done, Thao joyfully raised her arms up and cheered. What was left of the audience quickly followed with an enthusiastic round of applause. I overheard someone behind me mention how this must be the most adorable festival ending ever.

Clutching the setlist I requested from Thao as temperatures steadily returned to normal San Francisco averages, her words rang true. All Phono del Sol attendees should be proud that a festival like this, whose inaugural event was free just three years ago, happens right in our very city…not to mention that it’s a steal compared to Outside Lands.