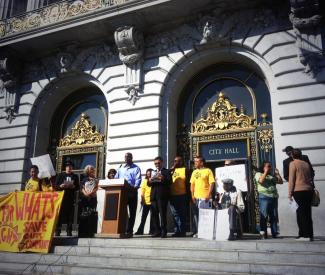 “The idea of people losing their homes is very disheartening,” Sup. John Avalos told the Guardian. “I’m looking forward to an ordinance that would actually allow San Francisco to join a JPA [Joint Powers Authority] and enable us to have leverage over banks.”

The original proposal would have stated San Francisco’s “intention” to form a JPA with the City of Richmond in the obscure—and controversial—use of eminent domain to acquire and fix underwater mortgages for homeowners in working class neighborhoods. But Avalos said that the resolution was primarily aimed at supporting Richmond in defending its principal reduction program.

“The resolution in support of Richmond’s work is not as timely as it was and I want to make sure I can work with you colleagues about the relationship around how we can actually have an ordinance to join a JPA with the city of Richmond and have all of our questions answered as we’re going through that process,” he told the Board of Supervisors on Tuesday.

Eminent domain is a law that allows the government to purchase private property for public use, including nontangible assets such as mortgages. The use of eminent domain to acquire underwater mortgages (when mortgage payments that exceed the value of homes) could be a godsend for homeowners who have been bamboozled by predatory lenders.

Yet Richmond, receiving national attention for the gutsy strategy, faced intense criticism—even federal lawsuits—from banks and financial institutions of late. Certain banks and financial institutions warned lending would halt if the strategy were attempted. Although Richmond recently braved attempts to quash its principal reduction plan, a JPA with San Francisco would allow both cities to leverage some power over banks.

“One city doesn’t have the resources to do it alone,” Sup. David Campos, who co-sponsored the resolution, told the Guardian. “Collectively joining forces can do it, and can be strengthened by taking a regional approach.”

Yet Avalos explained that he has already experienced disagreement from banks, including Well Fargo. “We are swimming against the tide—against the institutions of our banks that have a stronghold on how local loans and mortgages are kept at high interest rates, on the ability homeowners have to renegotiate loans, and on how we can improve the actual principal of our loans,” he told the Board of Supervisors, which was met by public applause.

“People don’t feel a sense of urgency about the housing crisis, and we need to convince them,” Avalos told the Guardian. “Overall we’re two years from the Occupy movement that challenged banks, and people have forgotten the feeling of the time where people questioned how much power banks had over the loan modification.”

In San Francisco, focus has indeed shifted toward out-of-control rents, though fallout from the mortgage crisis still persists. Over 300 underwater mortgages are concentrated in San Francisco’s working class communities, 90 percent of which contain predatory features, according to the Mortgage Resolution Partners, a company helping Richmond administer and finance their principal reduction plan.

Although roughly 64 percent of San Francisco residents are renters, some working class community member still own their homes, and some, like Carletta Jackson-Lane—who has lived in District 10 for 27 years and who spoke at this week’s meeting during public comment—feels that the African American community has been hit especially hard by foreclosures.

“Don’t forget that foreclosures are directly related to the outward migration of African American families out of San Francisco,” she said. “The reality is that in the Mission, there’s a different impact because they were mostly renters.

“The other impact in the African American community—especially in District 10—is that they were single family property owners, so when the foreclosure crisis happened, it knocked them out,” she explained. “And that’s multiple generations.”

Avalos sent the resolution back to committee for modification, and he expects a resolution to be voted on in August. “I don’t want San Francisco to be a place where only the wealthy can survive,” Avalos said.  “But in order to make serious changes we have to break a few eggs.”

When asked what those eggs were, he responded, “What currently is.”