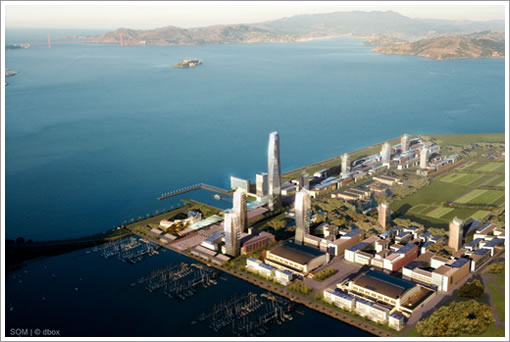 Construction on the first 1,000 of up to 8,000 new homes planned for Treasure Island could begin as soon as next year after the State Appeals Court this week rejected a challenge of the project’s environmental impact report by Citizens for a Sustainable Treasure Island, a grassroots group led by former supervisor Aaron Peskin.

The group challenged the project’s unanimous 2006 approval by the Board of Supervisors after its terms were modified the next year by the developers, Wilson Meany and Lennar Urban, to increase the number of homes and decrease their affordability. The project Peskin helped approve was 6,000 homes, 30 percent of them affordable, but now it’s up to 8,000 homes, 25 percent affordable.

More recently, stories by the Center for Investigative Reporting/Bay Citizen, San Francisco Chronicle, and others have also found evidence of lingering radiological contamination on the island from its days as a US Navy base, something that Peskin told us should raise concerns about the project.

“Obviously, we are disappointed in the court ruling and are very concerned it ignores the now widely reported news that Treasure Island is much more contaminated, by radiologically contamination, than we knew,” Peskin told us. As for whether his group intends to appeal the case to the California Supreme Court, he said, “We are assessing our options.”

Wilson Meany principle Chris Meany didn’t immediately return Guardian calls for comment (we’ll update this post if and when we hear back), but in a press release, he said, “After several years of unnecessary and costly litigation, we can finally begin building more homes for people who want to live in San Francisco.”

In addition to the homes, the project includes up to 500 hotel rooms, 450,000 square feet of retail space, 100,000 square feet of office space, and 300 acres of open space. To compensate for projections that rising seas caused by global warming would inundate the artificial island by the end of the century, its height will be raised substantially, with the EIR noting there will be about 100,000 trucks of landfill coming over the Bay Bridge during construction.

Traffic generated by the project has been a major concern of transportation officials from the beginning. San Francisco Transportation Authority Executive Director Tilly Chang said the challenge was, “How do you keep the Bay Bridge flowing and not muck up traffic?”

The plan calls for expanded bus and shuttle service to Treasure Island, new ferry service from the Ferry Building, and both expensive parking on the island for non-residents and a toll for driving onto the island, most likely set at $5, Chang said. The ferry service is set to launch around when the first phase of housing construction is complete, probably in 2018.

Meanwhile, work has already begun on a project to replace and improve the freeway ramps at adjacent Yerba Buena Island and the bridge that connects them to Treasure Island. SFTA Deputy Director for Capital Projects Lee Sage said the ramps will give much more time for cars to slow down or accelerate as they enter or exit the freeway there.

“It’s going to be very complicated, but we’re on target,” he said, estimating the eastside ramps will be done in 2016 and the westside ones a few years later.

Just last month, the Board of Supervisors approved terms accepting Treasure Island from the US Navy. Later this month  assuming that the issue of radiological contamination doesn’t derail the transfer — the city and project developers are scheduled to pay the Navy $55 million for Treasure Island and complete the deal.

But Peskin’s group and its attorney Keith Wagner, objected to the transfer in a June 25 letter to the Navy, calling for more studies on the substantially increased density of development on the island and more thorough testing and cleanup of contamination.

Wagner wrote, “In summary, the Navy’s 2003 EIS, on its own terms, did not evaluate the true nature of the City’s far more expansive contemporaneous development plans/proposals, let alone the even more expansive development plans that were ultimately devised and approved by the City in 2011; in the decade since the 2003 EIS was finalized, the Navy has developed significant and substantial new information indicating the nature, scope and severity of radiological and hazardous materials across NSTI that could impact the City’s 2011 development plans.”