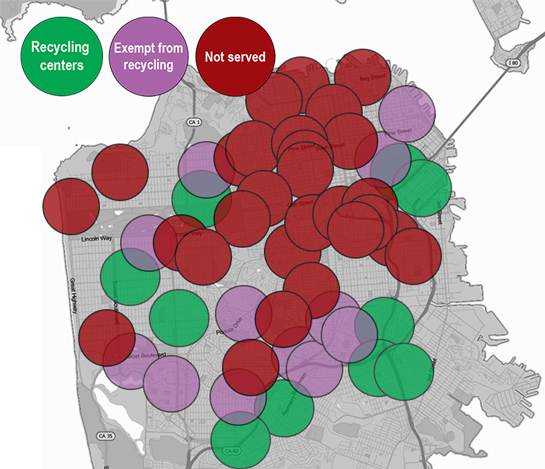 Red explosions and yellow starbursts lit the sky, accompanied by the requisite oohs and aahs.

San Franciscans sat by the beach at Aquatic Park celebrating our nation’s independence, eyes fixed upwards. But all around them, a team of independent scavengers, mostly ignored, methodically combed the wharf, plucking cans and bottles from the ground and overflowing trash bins.

Often derided as thieves or parasites, these workers are cogs in a grand machine instituted by California’s Bottle Bill in 1986, forming a recycling redemption economy meant to spur environmentalism with market principles.

The concept is simple. Taxpayers pay an extra five cents when they buy a can or bottle, and may redeem that nickel by trading the used can or bottle in at a recycling center. Thus, more recycling is spurred.

But now a wave of recycling center evictions is causing San Francisco’s grassroots recycling economy to crumble, and newly released numbers reveal just how much stands to be lost by the trend.

SOLUTION IS THE PROBLEM

San Francisco Community Recyclers is on the parking lot of Safeway’s Church and Market location, and after months of legal entanglement, the recycling center’s eviction draws near. Still, SFCR is making a show of resistance.

The San Francisco Sheriff’s Department is set to evict the recycling center within a week or so, as the rebel recyclers have so far refused to vacate voluntarily.

“This recycling center caused enormous problems in our neighborhood,” he told the Guardian. This particular Safeway lies within the boundaries of his district, and Wiener says his constituents complain the recycling centers draw too many unruly patrons, who are often homeless.

“There is problem behavior around the center in terms of camping and harassing behavior, defecation, urination in a much more concentrated way,” he said.

This animation shows the areas around San Francisco where recycling centers remain, which are often overburdened with customers as other centers close. The red zones indicate areas where supermarkets are mandated by state law to host recycling centers, but have chosen to pay fees instead.

But others say the not-in-my-backyard evictions only serve to create a ripple effect. The catalyst is a story we’ve reported on before: As well-heeled Golden Gate Park neighbors complained of homeless recycling patrons and waged a successful campaign to shutter the Haight Ashbury Recycling Center two years ago, the clientele adjusted by flocking to the Church and Market recycling center. New numbers illustrate this outcome.

Susan Collins is the president of the Container Recycling Institute, a nonprofit that conducts analysis on recycling data. On average nationwide, Collins said, one recycling center serves about 2,000 people.

But since 2012 the number of recycling centers in San Francisco has been reduced from 21 to 7, causing Church and Market’s service population to boom closer to 40,000, a difference that has more to do with the closures than the density of the area. Data from CalRecycle shows almost half of the city’s populace lacks a recycling center within close proximity, forcing patrons to overwhelm the few remaining centers.

“This makes it a chicken and egg process,” Collins told us. “For people to have the perception that the site is attracting so many people, they have to realize it’s because there are so few sites to begin with.”

“Safeway has such a long history of supporting sustainability efforts,” Ammiano wrote, “and I truly believe that it can do so again.” Safeway, however, has other concerns.

“As curbside recycling has increased in San Francisco and around the state,” Safeway Director of Public Affairs Keith Turner wrote to Ammiano, “Safeway’s focus on recycling has evolved as well.”

Safeway is now also flouting local and state laws to throw recyclers off its back. CalRecycle, the state’s recycling agency, performed an inspection in April of the Diamond Heights Safeway. It found that the grocer failed to accept recyclables and offer state guaranteed redemption, despite signing an affidavit with CalRecycle pledging to do just that. CalRecycle cited that location and two other San Francisco Safeways for noncompliance with the bottle bill.

And that’s just the violations CalRecycle has documented so far. Ed Dunn, owner and operator of San Francisco Community Recyclers, has initiated his own investigation into Safeway statewide, filing complaints with CalRecycle alleging that as many as 75 Safeway stores aren’t following the mandates of their affidavits and offering redemption for recyclables.

On the other side of the fence, Safeway and other recycling-center critics (such as Chronicle columnist C.W. Nevius) are essentially saying, who cares? Don’t we all just use blue bins nowadays?

“Why do we need recycling centers if we have curbside recycling?” Sup. Eric Mar asked the deputy director of recycling at CalRecycle, point blank.

Jose Ortiz responded in less than a beat. “While some communities think curbside operations ensure the state’s goals of collecting [recyclables], the reality is that 90 percent of recycling volume is collected through recycling centers, not curbside programs,” he said from the podium.

That number came as a shock to many at the Board of Supervisors Neighborhood Services and Safety Committee June 19, including Sups. Mar, David Campos, and Norman Yee. Only 8 percent of recycling statewide comes through blue bins, CalRecyle confirmed to the Guardian.

Nor is that limited to California: Data from the Container Recycling Institute shows that the 10 states with recycling redemption laws produce such a high rate of return that they account for 46 percent of the nation’s recycling. And since California Redemption Value recycling is pre-sorted, experts note, the bottles are often recycled whole (as opposed to broken) which can be used for higher-grade recycling purposes.

So for the city with a mandated goal of zero waste by 2020, the case for keeping recycling centers open is an environmental one. It’s also fiscal.

San Franciscans make $18 million a year selling back recyclables, Ortiz said, most of which went directly into the pockets of recyclers. Those scavengers at the Fourth of July festivities may have only collected five cents per can, but that’s enough to buoy the income of many poor San Franciscans.

At the recycling hearing, David Mangan approached the podium to speak. His red hat was clean and his grey sweatshirt was ironed, but his face was worn with worry-lines and creases.

“I can’t walk more than about eight blocks at a time, and I’m unemployable because of my disabilities,” he told the committee. Recycling centers are a lifeline, he added. “I need this job, I’m on a limited income. I need the help they offer. I need them to stay open, please.”

So recyclers are increasingly forced to rely on these so-called “mosquito fleets” for far-flung trips to cash in their bottles.

Meanwhile, recycling center evictions are becoming a source of anxiety within the small business community.

State law establishes a half-mile radius called a “convenience zone” around any supermarket that annually makes more than $2 million. The supermarket is mandated to provide recycling on-site, accept recyclables in-store, or opt to pay a $100 a day fee.

With the eviction of SFCR from Church and Market, Safeway may opt to pay the fee. But that gap would leave surrounding businesses inside that convenience zone with the same options: accept recyclables in-store or pay $36,000 a year.

Miriam Zouzounis of the Arab-American Grocer Association said those options are daunting for liquor stores and mom-and-pop grocers.

“We just don’t have the space for [recycling],” she said at the hearing. If SFCR were to close, the total of small businesses shouldering the burden of state recycling fees would jump from 100 to more than 360, said Regina Dick-Endrizzi, director of the city’s Office of Small Business.

All told, San Francisco small businesses would be made to send $12.96 million in annual fees to California coffers because a few supermarkets didn’t want to handle recyclables. Mar is now calling upon all involved to step up and solve this glaring problem.

SOLUTIONS ON THE WAY

This week the Board of Supervisors is tentatively set to vote on a moratorium of recycling center evictions, introduced by Mar on June 24. The pause would give Mar time to form a work group with those involved: Department of the Environment, Department of Public Works, CalRecycle, local supermarkets, grocers, the Coalition on Homelessness, and others to come together to form a compromise solution.

Department of the Environment proposed a mobile recycling center, which Wiener called an equitable solution that would help distribute recycling responsibility evenly across the city. While that agency did not provide a timeline on the creation of a mobile recycling center before our deadline, it’s been in the works since 2012, when then-District 5 Sup. Christina Olague said it was the answer to the Haight Ashbury Recycling Center’s closure.

It’s been a long wait for a solution. And in the meantime, many more stand to lose.